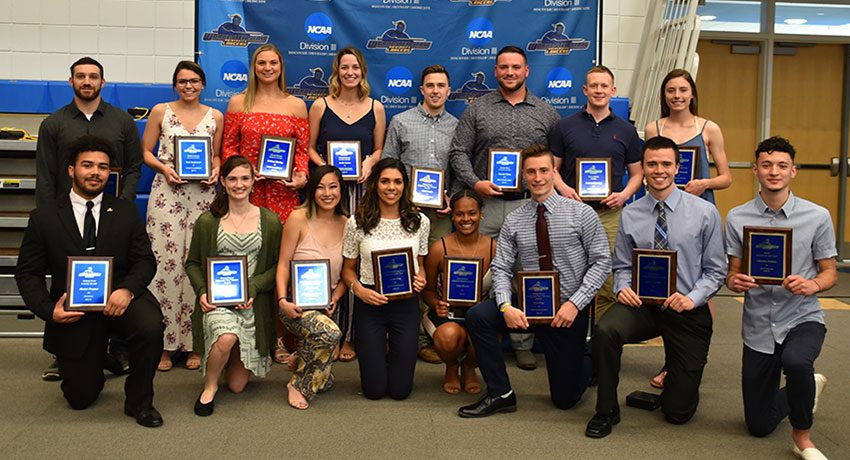 Seventeen Worcester State University student-athletes were honored on Monday, May 6, at the annual athletics award banquet held on the John P. Brissette Court in the Wellness Center.

Seniors Marcus Vieira the men’s track & field teams, Michaila Parent of the field hockey team, and Brittany Herring of the women’s basketball team took home the biggest honors of the night as recipients of the Robert Devlin Senior Male and Female Athlete Awards. The award is given annually to a male and female student-athlete for their outstanding athletic performance and achievement over the course of their career at Worcester State.

The Senior Lancer Awards, given annually to a male and female senior student-athlete exemplifying dedication to their program, leadership qualities, and good sportsmanship that may or may not have translated into superior statistics and/or accolades, went to Hunter Paupaw of the football team, Kate Surprenant of the women’s basketball team, and Emily Carens of the women’s volleyball and basketball teams.

Mitch Purdie of the men’s ice hockey team, Scott Page of the men’s track & field teams, and Parent were the recipients of the Senior Male and Female Margaret “Peg” Nugent Award, given to a senior male and female student-athlete for superior athletic and academic performance throughout their Worcester State careers.

The Most Outstanding Male and Female Athlete of the Year Awards were presented to seniors Michael Ferrara of the baseball team, Amari King of the women’s volleyball team, and Mia Rogers of the women’s cross country and track & field teams.

Seniors Ryan Connolly and Delia Rhodes, both members of the track & field teams, took home the Rich Korzec Athletic Service Awards for their contributions to both their teams as well as the athletic department as a whole. Connolly is an intern in the sports information office, while Rhodes is a four-year member of the athletics work-study staff.

The Blue & Gold Award was presented to senior Andrew Etheridge, a member of the Worcester State men’s ice hockey team. The award is given annually to a senior who has overcome severe adversity to succeed athletically. Etheridge has battled back from seven different injuries during his time at Worcester State, as has served as alternate captain for the Lancers in each of the last two seasons.

Freshmen Clayton DeMelo of the men’s soccer team and Madison Brennan of the women’s lacrosse team rounded out the awards on the evening, as each were named Worcester State’s Rookies of the Year.

“The awards banquet is such a great opportunity to celebrate the athletic and academic accomplishments of all of our student-athletes,” said Worcester State Director of Athletics Michael Mudd. “I’d like to congratulate all of our student-athletes on a terrific 2018-19 season, and thank our outstanding senior class for everything they have done for Worcester State University.” 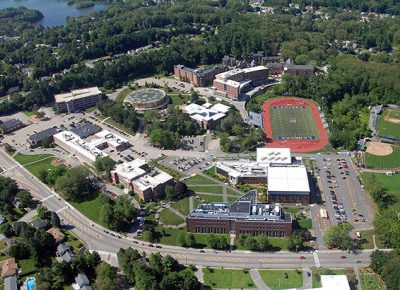 A 14-week campus improvement project, partially funded through state infrastructure funds, will begin on Wednesday, May 1, and continue throughout the summer. The construction projects include . . .