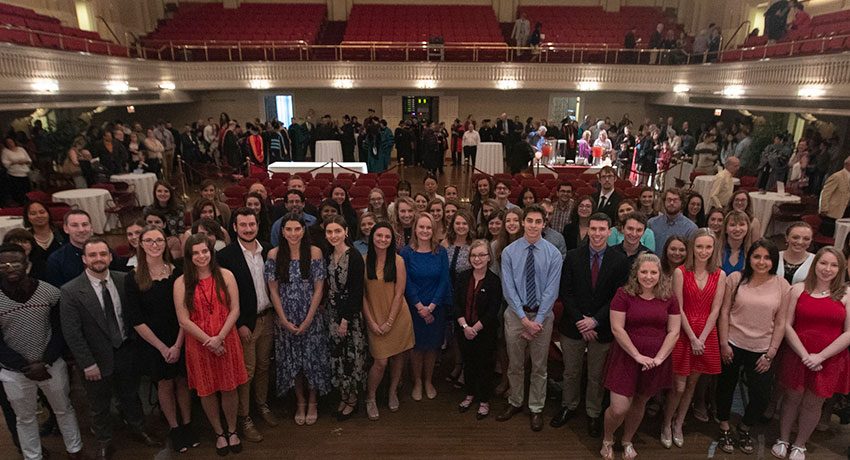 “No other ceremony speaks to the quality of Worcester State University’s learning experience as this one does,” President Barry M. Maloney said. “It showcases the achievements of our hard-working, motivated, intelligent students and indicates the role our faculty have played in guiding these students to success.”

The Ella M. Whitney Award was awarded to Katelyn Surprenant, an occupational therapy major, athlete, and leader in student organizations. Whitney was an 1891 graduate of the Worcester Normal School (WSU’s predecessor). This award is given to a student who exemplifies her abundance of positive qualities, including participation in school activities.

The John F. Eager Continuing Education Excellence Award, which goes to the undergraduate student in WSU’s evening program with the highest G.P.A., when to Abigail DuBois, a non-traditional student majoring in psychology.

Full-time WSU students who have achieved the best G.P.A. in their class are presented with the Lt. Col. James F. Sheehan ‘55, USMC Ret., Excellence Awards, named after the most generous benefactor in Worcester State history. In total, six Sheehan Awards were handed out this year to hard-working and well-deserving students.

“Those stories reflect a wide range of academic and career interests,” he said. “There is a common thread to them: It is that our flexible curriculum enables students to pursue not only their career goals, but also their passions–when those things are separate, and also when they are the same.”

The Senior Sheehan Award went to Amy Ngoc Nguyen, a psychology major. This is her second year receiving a Sheehan Award.

The entire list of all awards given:
Ella M. Whitney Award: Katelyn Surprenant

SCHOOL OF HUMANITIES AND SOCIAL SCIENCES

WSU Chapter of the National Student

Clinical Excellence in the Art and Science of Nursing Award: Abigail Sniegocki

Christina Santana, assistant professor of English and Writing Center director, was recently chosen to receive a 2018-2019 Emergent Researcher Award from the Conference on College Composition and Communication, National Council of Teachers of English. Widely recognized as a flagship journal in rhetoric and composition studies, CCCC has a membership of over 6,000 college and university writing . . .