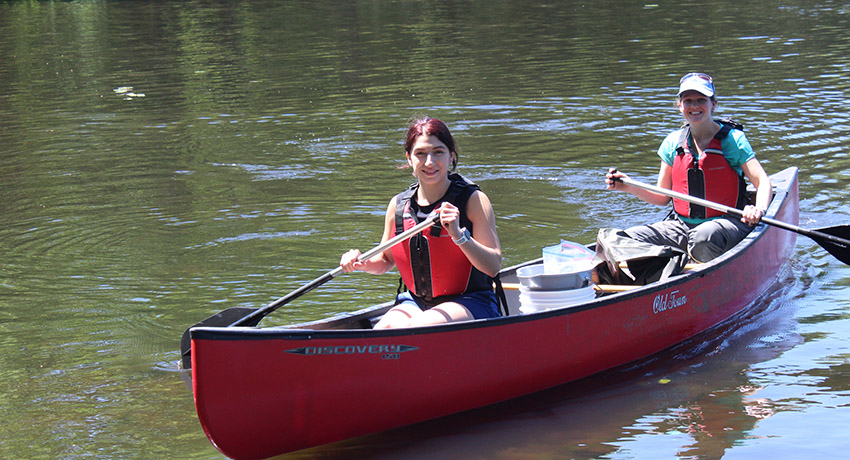 Zoe Krouner ’21, an environmental science major who will graduate in December, doesn’t clam up when it comes to sifting through pond muck looking for invasive species.

On a recent field trip at Patch Reservoir near the Worcester State campus, Krouner beached her canoe on a shrub-covered island, donned hip waders, and eagerly dug into the black muck of the shoreline shallows under the expert guidance of Diana Sharpe, Ph.D., assistant professor of biology.

“I worked in the water for the first time last summer, and that’s when I realized that I love being out in the field and being on the water,” Krouner says. “I love being hands-on, working with the actual organisms like the fish and shellfish, so when this opportunity came up, I saw it as a great way to get experience for potential research jobs in the future.”

The opportunity she refers to arose through a summer fellowship grant from the Aisiku STEM Center that will allow Krouner and Sharpe to work over the summer producing a baseline survey of the biodiversity in Patch Reservoir, a manmade pond that is not used as a drinking water supply. A main goal of the survey is to identify aquatic invasive animals that may be in the water.

One of the species they will be on the lookout for this summer is the Asian clam, a troublesome mollusk that recently has been detected in several Worcester ponds and lakes. Asian clams eat phytoplankton, competing with native mussels who feed on the same microscopic plants. The clams also can clog up water intake pipes.

Most public attention has been focused on invasive aquatic plants like water chestnut and European milfoil because they are so conspicuous and are a bane to swimmers and boaters. Introduced animals, including fish and mollusks, are usually harder to track and document because they live underwater and so are less obvious, Sharpe says. The danger may be hidden, but it is no less threatening to the health of a water body.

So how do unwanted species like the Asian clam find their way into places like Patch Reservoir?

“The funny thing with biological invasions is we often don’t know,” Sharpe says. “It’s often accidental. One of the ways that many aquatic invertebrates are introduced stems from the fact that their larval forms are so tiny that you can’t see them in the water. For example, there might be water in the bottom of your boat, and you move your boat from one lake to the other and the water drains out and that’s one way they get in.”

There also are aquarium owners who release the contents of their tanks into lakes and streams, sometimes with adverse results. “When they’re done with their aquarium, they empty it out in the lake and whatever’s in there gets into the waterway,” Sharpe says.

Not all non-native species are released accidentally, however. A big exception is stocking fish for the benefit of anglers. “In Patch Reservoir and many other lakes, we have small-mouth bass and large-mouth bass, which were historically intentionally stocked for recreational fishing, but they’re not native to the state,” Sharpe says. The introduced bass can prey on native fish, which leads many people to question the practice. But it’s a contentious issue.

“A conservation biologist would probably say we shouldn’t stock them, but an angler would say, ‘Yeah, but we like to fish them,’ so there’s always that tension between different interests,” Sharpe says.

The Asian clam also probably arrived in North America intentionally because it is consumed in Asia as a food. “It might’ve been imported in the 1930s as a food, and then it just gradually started spreading through a combination of intentional movement but also just accidentally,” she says. “People are moving water from place to place, moving boats, moving bait.”

Have they found any Asian clams in Patch?

“Not yet, but we’ve just started this project, so we’re on the hunt to see if we see them,” she says. Once they establish themselves in a waterway, most invasive species are very hard to eradicate. “The best thing we can do is prevention, like what we’re doing now to monitor and figure out where they are and then trying to work with the public to implement best practices such as cleaning our boats before we move from one waterway to another and being careful about how we handle imported pets.”

Sharpe, Krouner, and other WSU researchers now can launch their canoes easily from a waterfront property at 30 Breeze Drive that the Greater Worcester Land Trust recently purchased. The GWLT and WSU recently signed a memorandum of understanding that allows the University to use the property, which consists of a house and an extensive wooded lot and is located about a 10-minute walk from the university.

“It’s a beautiful spot,” Krouner says. “There’s a dock where we can launch right into the water and we can store lab equipment downstairs in the basement, which saves lots of time from lugging it around. We don’t have to worry about our samples getting disturbed since we can persevere them immediately. We will be able to work efficiently while keeping samples safe and organized in the lab room. Having a work station on site is an incredible opportunity for research advancement.”

No one has ever surveyed this lake in a systematic way, Sharpe says, so there is not a complete list of what species are in it. That baseline is important so that the health of the reservoir can be tracked over time.

“Hopefully in future summers we’ll scale up and have a bigger team, but it’s just Zoe and me right now,” Sharpe says. “We’re really just starting this project, and so the main thing we want to do is get a baseline survey of the biodiversity in the lake so researchers can see how it changes as climate and the landscape change and as new species arrive.” 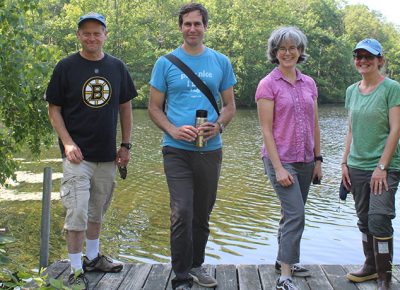 A new agreement between Worcester State University and the Greater Worcester Land Trust means students and faculty will have easier access to Patch Reservoir for water-quality research and other educational endeavors. The recently signed memorandum of understanding benefits Worcester State’s academic efforts while helping the land trust fulfill its mission of partnering with local academic . . .