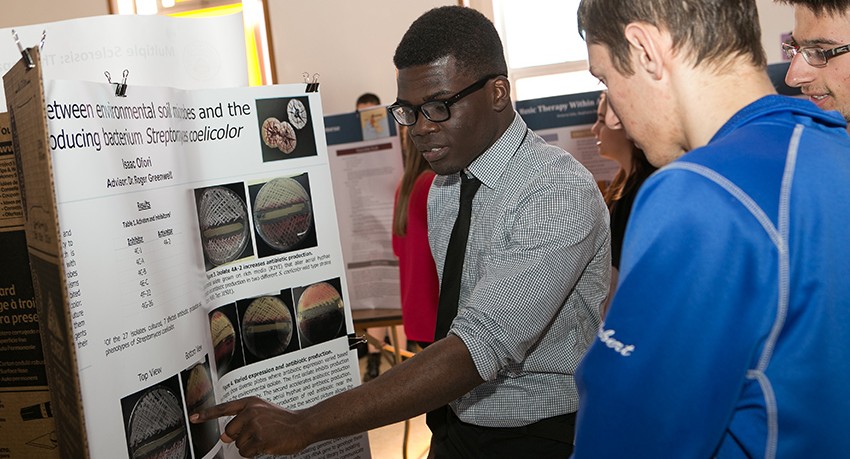 The depth to which Worcester State students care about current events, interests, and real-world challenges is evident in the topics they selected for projects they put on display at the annual Celebration of Scholarship and Creativity.

The event gives students across all academic disciplines an opportunity to showcase their research, scholarship, and creative work. Fourteen oral and panel presentations and 137 poster presentations were held throughout the day in the Student Center and May Street Auditorium.

For communication sciences and disorders major Ashley Lameiras, she wanted to gain a better understanding of how the elderly perceive hearing loss. She had 19 people ages 35 to 87 complete a questionnaire called the Hearing Handicap Inventory for the Elderly. “The higher the score the adult receives, the higher that adult perceives their handicap,” she explains.

Lameiras compared the total score to the emotional score and to the social score. She also compared the HHI-E to the degree of hearing loss in the person’s better ear.

“The big message to get across in my research is that we cannot take this questionnaire and put a label on someone who suffers from a hearing loss because everyone copes differently,” Lameiras says. “It all depends on their situation and other factors.”

Students in one of Assistant Professor of Chemistry Susan Mitroka’s labs examined how nitroxyl (HNO) reacts with the selenoprotein TrxR because it is one of “several TrxR inhibitors…being tested as possible cancer” treatments. “Our goal is to see if HNO will react preferentially with this enzyme over those containing a sulfur, thus killing off the cancer cells overproducing the enzyme and reducing the collateral damage to unaffected cells,” Mitroka explains.

While Mitroka’s students ran laboratory experiments with the enzyme, Assistant Professor of Chemistry Joseph Quattrucci’s students investigated “the computational aspect of these reactions,” she adds.

These projects are among those that will be on display from 3 to 5 p.m. in the May Street Auditorium. The poster session also will feature a “reverse career fair” during which registered employers can talk with students about their projects.

Communication student Aimee Thorsen is one of several students who gave an oral or panel presentation about a project in the Student Center’s Fallon and Foster Rooms.

Thorsen analyzed a pop-culture sensation, the British television show Doctor Who, for her project. Specifically, she “took a look at common trends that women portray in multiple infamous genres and compared that to how the female roles in Doctor Who are represented,” she explains. She did this for the show’s recent female roles and those from seasons in the 1960s through 1980s.

“This allowed me to look at the progression of female roles in this show,” Thorsen says. “For example, in 1973, we meet Sarah Jane Smith, who is an independent journalist, and acts as a powerful woman lead, unlike a newer 2005 companion, Rose Tyler, who is primarily seen as a damsel in distress and eventually the first true love interest of The Doctor himself.”

“I was able to find traditional characteristics of female roles in science fiction and see where those trends are still portrayed,” she adds.

Other presentations in the Fallon Room were:

The Goodbyemoon: A Memoir of Loss by Amy Angell

The Emergent Paradigm by Olivia Gyedimin

Presentations scheduled for the Foster Room were:

Robbed of Choice: The Commercial Sexual Exploitation of Children in the United States of America by Emily L. White

Internships at the Worcester Art Museum, a Collaborative Project of Visual and Performing Arts and Communication by student Ryan Jarvis and faculty members Julian Berrian and Catherine Wilcox-Titus

The Marvelous Dissection of the [hu]Man by Kristine MacBrian

This was the ninth annual Celebration of Scholarship and Creativity. It is coordinated by the Academic Affairs Division with participation from a broad range of academic programs, undergraduate and graduate students, faculty members, the Honors Program, and Career Services. 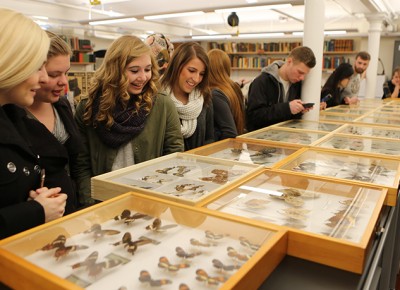 Assistant Professor of Biology Sebastian Velez, Ph.D., recently took a group of students in his Entomology class to visit Harvard University's beetle collections at its Museum of Comparative . . .