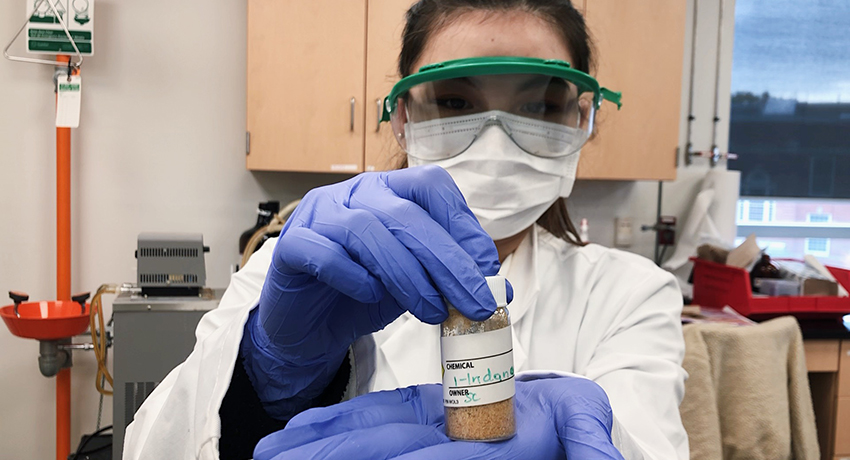 As the fall semester began, Weichu Xu, Ph.D., assistant professor of chemistry, realized the pandemic meant visits to the lab would be restricted for many students and impossible for those in isolation, so they would need extra help to prepare for and understand experiments. He thought videos on lab topics might fill the gap.

“We looked around for suitable online resources but to no avail,” he says. “Everything cost extra money or didn’t meet our needs in some way, so I came up with the idea to make videos based on our own lab protocols.”

Xu was confident his team of student researchers would have the skills necessary for the project and also got encouragement from Chemistry Department colleagues Professor Margaret Kerr, Ph.D., and Associate Professor Jeremy Andreatta, Ph.D., and Department Chair and Professor Meghna Dilip, Ph.D.

The result is a series of high-quality videos on a range of lab topics from chemical extraction methods to chromatography.  “The team has done a wonderful job,” Xu says. “They are much better than the videos available online that cover similar topics and skills. We tailored the videos to our lab protocols and to meet our needs, and feedback from students who watched them has been overwhelmingly positive.”

Nguyen’s role as producer includes setting up the cameras, recording, and editing the videos, then uploading them to a hosting site for students to view. Doran writes the script and does the voiceover, and Nhu is the model seen on the video carrying out the experiments. Also helping out is first-year student Emma Polak ’24, who has been training to take over the position as narrator for the spring semester.

The team hopes the videos make it easier for students to prepare for class.

“When I took organic chemistry lab courses, I only had a manual to help me prepare,” Nguyen says. “Based on that, I had to picture what would happen in the next class. This could be extremely difficult for students with special needs, such as those who have dyslexia or those who are visual learners. In making these videos, our goal is to show the students exactly what will happen in their next class so when they come in, they are ready and can get to work right away.”

The videos go beyond what can be learned from a lab manual, Doran says.

“A lot of times during filming, Dr. Xu would elaborate on some of the chemical processes that are involved in the experiments,” she says. “I was able to incorporate that information into the script. That way students were able to learn a little bit more of the chemistry behind their lab and it’s not just the lab manual narrated verbatim. That was the whole goal of the project—to explain chemical processes in ways that students would understand.”

The comments left on the videos by students who have viewed them indicate that the team has more than met that goal. Some comments include:

“Great video. I like that you show the reactions of the starting materials with the acid/base used to extract them. It sort of simplifies the whole experiment and makes it easier to understand. Great visual content!”

“This video has been really helpful! I feel very confident walking into my lab! Thank you so much for the detailed demonstration!”

“Sometimes I feel as though just reading a procedure in a lab manual can be overwhelming. This helped break everything down and really clarify how the lab should be executed.”

Besides helping prepare for lab work, the team also hopes the videos will help students who could not come to class because of the pandemic. “We hope our videos can help those students so that they can still learn effectively while staying at home,” Nguyen says.

Making the videos was as fun as it was educational, the crew members say.

“We’re always laughing when we’re filming these videos,” Doran says. “We’re able to form closer relationships with people that are in our major. We actually learned a lot from each other and have a lot of fun doing it.”

The students say they are grateful for experiential learning stipends from the Worcester State Foundation that helped support the project.

“These stipends really helped my students during this difficult time to work on the project,” Xu says. “Han, Emily, Nhu and Emma are all excellent students not just academically, but they also all have a loving and caring heart.”

Xu says the project’s success means it will continue.  “More videos are coming, so stay tuned,” he says.

Watch one of the videos here. 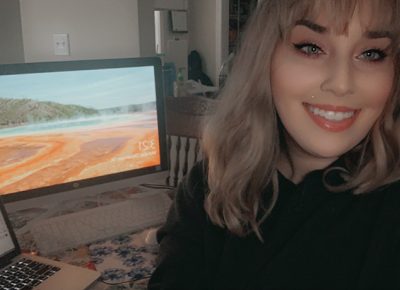 Student Teaching in a Virtual World Presents Challenges and Opportunities

Meaghan Riedle ’20 always expected that she would learn her way around a classroom during her student teaching stint. But when she started that critical phase of her education in September, there was no classroom to teach in. Like most Worcester State student teachers this fall, she found the school she was assigned to had switched to remote learning because of the pandemic. “I was kind of . . .