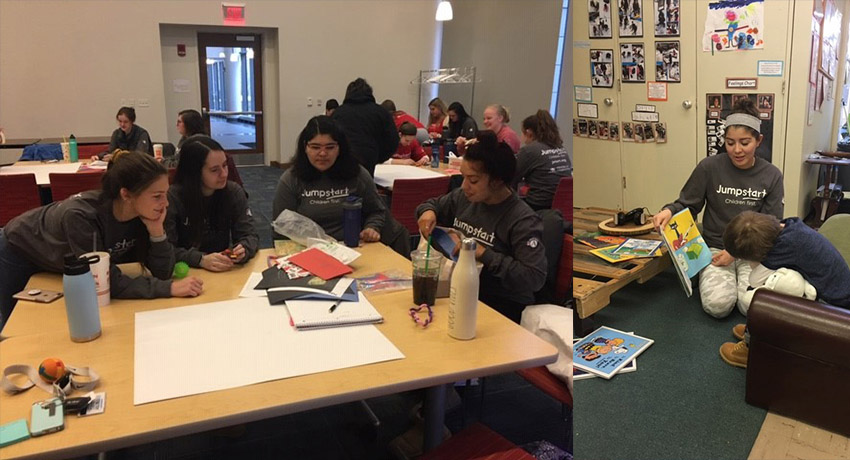 For the past six years, Worcester State students have been helping some of the city’s youngest residents learn critical skills needed for a lifetime of learning. In total, 167 Worcester State students—joined by students from other Worcester colleges and universities—have participated in the AmeriCorps-affiliated program Jumpstart, visiting preschools and Head Start programs in Worcester to teach literacy, language, and social skills to kids as young as 3 years old.

Students receive hours of training in the Jumpstart curriculum before they start working with the children, most of whom come from underserved communities. Pre-pandemic, teams of four visited their assigned programs twice a week for two hours, first reading a story and then manning stations that may reinforce learning objectives like new vocabulary words.

After a pause for several months during the pandemic, the program restarted with two-way virtual sessions. In addition, newsletters that included videos created by the Jumpstart college students were sent to families, and curriculum bags were delivered weekly to seven partner preschools.

“We hope to build a foundation that will help level the playing field for underserved residents,” says Jumpstart Coordinator Lynn Thompson, whose office is located in the basement of Dowden Hall.

Jumpstart, a national organization with 64 other sites around the country, established a special relationship with Worcester State after Associate Professor Christina (Bebas) Kainu, Ed.D., and Mark Wagner, Ph.D., director of the Binienda Center for Civic Engagement, presented findings at the Massachusetts Services Alliance on the partnership between Worcester State and the public schools. The program has expanded to include 55 students from other local colleges, including Assumption, Holy Cross, and Clark University.

A recent research project by Wagner tracked the outcome of about 50 former Jumpstart children who are now in the first through third grades in the Worcester Public Schools. Working with Christina Kuriacose of the WPS’s Office of School and Student Performance, Wagner used results from STAR Reading scores and Fountas and Pinnell Running Records to conclude Jumpstart alumni—many of whom come from families facing multiple barriers—showed reading skills on par with a control group representative of the district.

“We might have had, in a normal world, MCAS data, which would be an even more standardized look at how these students are doing. We don’t have that,” due to third-grade MCAS testing being eliminated because of the pandemic, says Wagner. But based on other testing results, he concludes, “We succeeded in that the Jumpstart cohort is roughly on par with the students in the district.”

He also notes a significant decrease in the number of children considered English-language learners in the Jumpstart cohort over several years (63 percent to 50 percent). Attendance levels also met or exceeded those of the control group.

In addition to helping the youngest city residents, Jumpstart offers benefits to Worcester State students, including the opportunity to receive up to $3,000 from AmeriCorp, federal work study, or Mass Service Alliance stipends. Participating students say Jumpstart also satisfied their need to help the community, work with children, and learn how to lead and be part of a team.

All majors have been represented over the past seven years, although more than half have been either education or CSD majors. About 45 percent become involved as a first-year students and 33 percent as sophomores, with 22 percent serving multiple years.

Psychology major Nilka Rodriguez ’21 found out about Jumpstart the summer before she started at Worcester State during an information session at Welcome Day. Although her dream is to work as a substance abuse counselor, she says the job appealed to her love of children and the feeling that she was making a difference.

“I saw vocabulary improvement each day, including while they were playing and talking,” says Rodriguez, who worked with Jumpstart during two school years and two summers, eventually becoming a team leader.

“My love for being a teacher grew because of it and I also improved as a person as well. It can be stressful sometimes, but I’m always going to be thankful for this opportunity,” says Shayla Gonzalez ’22. 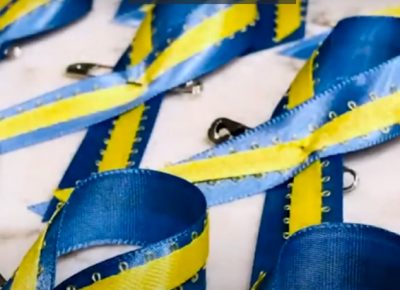 Nursing Students Welcomed Into the Profession With Virtual Pinning Ceremony

Graduating nursing students were welcomed into the nursing profession at the annual Dr. Lillian R. Goodman Department of Nursing Pinning Ceremony, held virtually via a video released on Wednesday, May 12. Nursing faculty and University leaders offered congratulations to the graduates, who noted their accomplishments came during a particularly difficult period of time. “You will all . . .