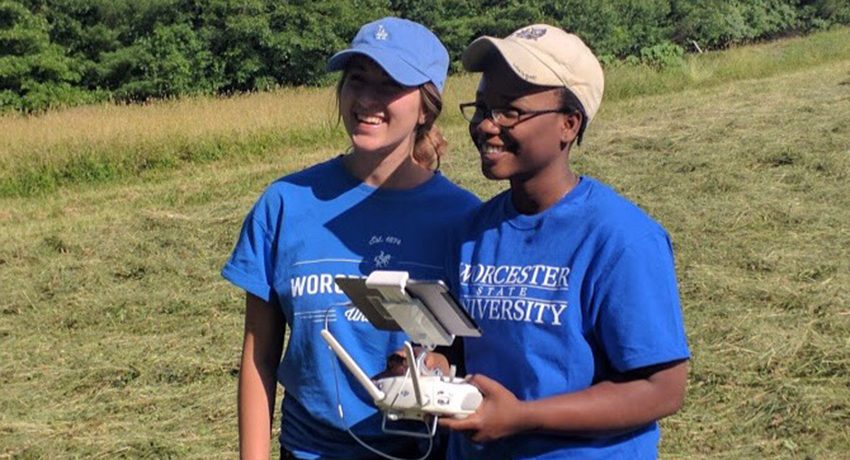 Students Use a Drone to Explore Historic Estate

Two Earth, Environment, and Physics students are using a drone to record and analyze the topography of a historic conservation property in Boylston, Mass. Their work will pave the way for other student research at the site.

It’s part of a budding partnership between Worcester State University and the Hillside Restoration Project, a nonprofit organization managing the restoration, preservation, and reuse of the John B. Gough Estate at Hillside.

In 2017, Professor of Earth, Environment, and Physics William Hansen, Ph.D., joined Associate Professor of History and Political Science Tona Hangen, Ph.D., and Professor of Biology Stephen Oliver, Ph.D., at Hillside to discuss how different academic departments “could use this property, enter into a relationship and do academic investigations, and use it to bring students” there, Hansen explains. All three are chairs of their respective departments.

Before any formal plans are made, the faculty need to know more about the property and its potential. That’s where Farah Aubin, a senior geography major, and Lauryn Mulcahy, a junior environmental science major, come into the picture.

“We’ve been working over the summer to try to establish locations where we can take students,” Hansen says. “We’re using Student Research Grants to do that. Our proposal was to establish field sites, establish methodologies, do some surveys, and have things ready so we know what to expect when the students come here. Then we would start bringing classes here maybe in the fall and spring.”

Aubin and Mulcahy, who were recruited by Hansen for the summer research internships, have spent most Tuesdays and Thursdays over the summer either flying a drone over pastures and forests at Hillside or in the GIS Lab at Worcester State analyzing the footage and Light, Texture, and Range (LiDAR) data.

“The property has, for our purposes, a wide variety of great features to it,” Hansen says. Those include the remnants of the old farm, including foundations and stone walls, as well as buried mounds and disposal areas that might contain old pottery.

The site’s mixed forests will fit in with the Earth, Environment, and Physics Department’s long-term studies of “looking at old pastures that have regrown into forest and looking at the growth rate and the carbon uptake of these revegetated areas,” Hansen says. The Hillside property has “a variety of fields that have done this at various times.”

Aubin and Mulcahy have been using the drone to “create sites in an old pasture that has grown back” and comparing the footage to old aerial photographs taken of the area between 1938 and 1952, he explains. “We want to mark off the site” and make sure it’s a good place to bring students.

For Aubin, who has worked on various research projects with Hansen since her first year at Worcester State, the most memorable part of this internship is collecting the primary data that other students will use in class assignments.

“I’ve never collected my own data before,” she says. “I’ve always used other people’s data.”

Mulcahy has enjoyed perfecting her ability to fly a drone. Her most memorable moment, though, happened while she and Aubin were collecting water-quality samples on Patch Pond. Aubin gathered the samples while she recorded them in a GPS app on her phone. It wasn’t until she was back on dry ground that she realized she failed to submit each sample location. Learning from the mistake “was a good experience,” she says.

Researching the Hillside property has its challenges as well. For instance, there is a spring house in an old photograph, but Aubin and Mulcahy have been unable to find it with the drone or on foot. The LiDAR data of the property, which is available from the National Oceanic and Atmospheric Administration, doesn’t show it either.

John Holbrook, a geoscience laboratory technician, hopes to have better luck finding it during the fall semester.

Aubin and Mulcahy use the LiDAR data to plan what plant life and other topographical features to look for when they are at Hillside.

“It’s going out there and doing the work that you would normally just see on a map, but you don’t know what goes into it,” Aubin says. “This time, it is us going into the woods and us looking for a stone wall, us looking for the small thing that were there, or this pasture that was once forest and it’s grown into a forest. Some changes that we can see in the LiDAR, now we can see with our eyes.”

Aubin and Mulcahy will continue their research on the Hillside property and Patch Pond through next academic year. “By the end of it, Professor Hansen wants us to have a full project and be able to teach other classes about it,” Mulcahy says.

And students in the department’s hydrology class will be able to use their water quality sample data, Aubin adds. “All of this is part of a bigger picture—someone else is going to eventually use the data we are collecting.”

The Hillside property is one of about 65 area locations that the Earth, Environment, and Physics Department has captured with drone footage for research purposes, Hansen says. 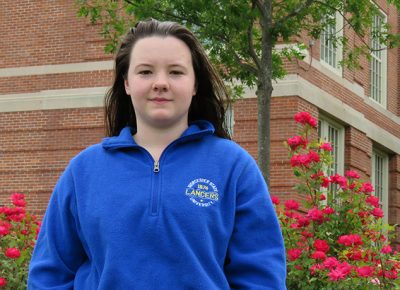 Student Inspires Others to Care about Pediatric Cancer

For sophomore Katelyn Duca, an unsuccessful class presentation sparked a dogged mission to get her fellow students to show support for pediatric cancer care and research. Her efforts resulted in a . . .