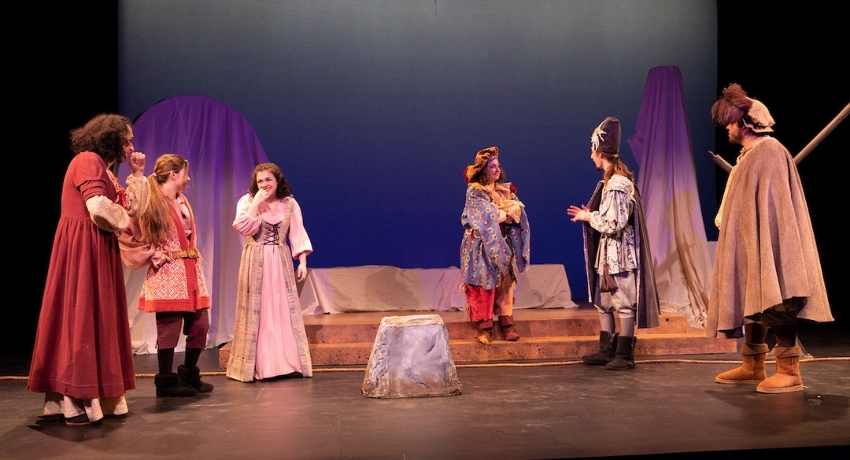 The Arts are back and stronger than ever

The buzz was undeniable – live Latin jazz rhythms mixed with the celebratory laughter and chatter of people gathered after too long separated. And the artwork! Colorful masks, a striking 6-foot ﬂoor lamp with a luminous shade like a hornet’s nest. Vivid geometric paintings. And a skull made of teeth. The crowd couldn’t get enough. 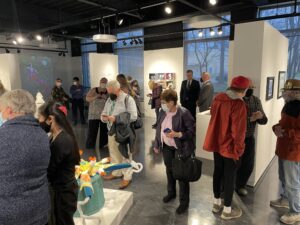 This vibrant scene in the Mary Cosgrove Dolphin Gallery for the Spring Student Art Exhibition – bringing together student artists from the Visual and Performing Arts Department, the University’s student and faculty Latin American Music Ensemble, Musica!, friends and family, and community arts leaders – had not been possible since spring 2020 when the COVID-19 pandemic halted in-person visual and performing arts gatherings across the world.

“It was electric in there, to be honest,” said Gallery Director Stacey Parker, professor of Fine Art and Interdisciplinary Studies. “You could literally feel the excitement. Everybody was really loving the music and the art.”

A renewed sense of urgency to gather in creative expression in classrooms, performing arts spaces and studios is sweeping the campus as Worcester State theatre, music and visual art students have reunited this year with live and in-person audiences. This thirst for the arts is unfolding as the University’s Visual and Performing Arts Department experiences its own renaissance with two new bachelor degree offerings, new faculty, growing enrollment and a thriving synergy with the wider Worcester arts community. 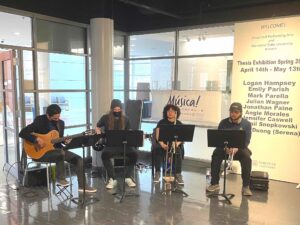 “The arts are one of the central ways that we communicate our ideas about ourselves to ourselves and to others, and that’s how we make meaning within community and that’s how we express value across communities,” said Professor and Department Chair Sam O’Connell. “One of the things the pandemic showed us is the true value of that. At times, entertainment can provide distraction and some sort of escape, and it’s how we connect with each other.”

In Worcester, a city with one of the most dynamic arts communities in New England, Executive Director Elaine McKenna-Yeaw of the Worcester Center for Crafts, one of the nation’s oldest educational craft institutions, said she is noticing this phenomenon, too. At the start of the pandemic, courses turned virtual at the Center. Recently, the Center, which has served generations of families over the years and shares its building on Sagamore Street with Worcester State visual art and music composition studios, returned to offering in-person courses.

“Once we were able to go back to full capacity, oh my gosh, I compare it to when hard-toget concert tickets go on sale and they sell out immediately,” McKenna-Yeaw said. “That’s how fast our classes are filling up. People are just really excited.” 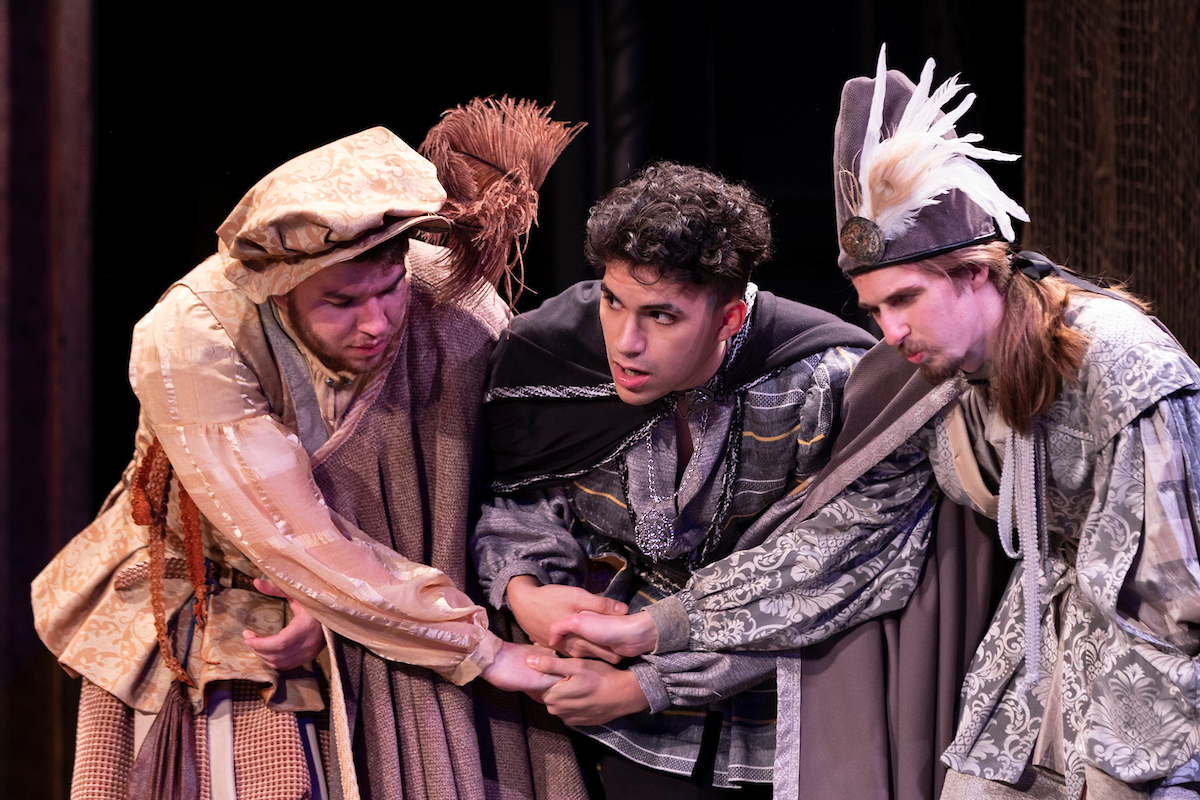 SINCE OFFERING ITS FIRST MAJOR, an interdisciplinary B.A. in visual and performing arts, to two students in 2009, the VPA department has grown steadily over the years. In 2021, it added two new majors, a B.A. in theatre and a B.A. in visual art, while continuing to offer the interdisciplinary major and minors in music, music composition and technology, art, and theatre.

Today, some 700 Worcester State students take courses across the arts curriculum, including more than 80 students who are presently earning visual and performing arts majors and minors. Contributing to that growth is student participation in music lessons and ensembles, with more than 30 Worcester State students taking music lessons and approximately 60 students participating in music ensembles in the spring.

It’s that passion that drew Caroline Ford ‘23, one of VPA’s first new visual art majors, to the program as a transfer student from Bridgewater 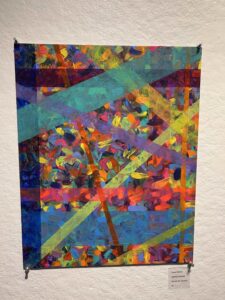 State. “Coming here, I was super excited that Worcester State had a new art major, and I could just focus on that and do what I love,” Ford said.

Alongside the increasing numbers, the department has established itself in the fabric of the University and the greater Worcester community. One of the most powerful examples of this involves an initiative called CitySpeak, an innovative, eight-year-old partnership between VPA and the Urban Studies Department that provides Worcester’s diverse populations with a channel of expression through arts- and research-based urban planning and community development. Through its productions, CitySpeak tackles complex and controversial issues in the community.

During the pandemic, CitySpeak produced a virtual spring 2021 performance, “Dancing with Demons,” an interdisciplinary play devised by Worcester State students and faculty through use of real-life interviews and oral histories gathered by the Urban Studies Department. The presentation went on to earn high honors from the Kennedy Center American College Theater Festival Region 1.

Additional transformative partnerships over the years have included those with ArtsWorcester and The Sprinkler Factory. The Mary Cosgrove Dolphin Gallery has created conversation with groups such as the Worcester Art Museum and the Worcester Center for Crafts, among others.

AS WORCESTER STATE’S ARTS programs grow, so too does its roster of accomplished local artists and performers. In pre-pandemic times, the Worcester State Chorale with Professor Christie Nigro toured internationally and newly hired Assistant Professor Carlos Odria performs across Central Massachusetts and has just released a new album. 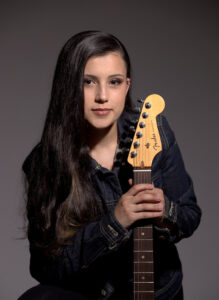 Musician Annie Machado ’19 graduated from Worcester State with a major in Visual and Performing Arts and a concentration in music. Today, she is the drummer in local blues band “No Shoes,” a group that plays at the legendary Bull Run venue in Shirley, the Midway Cafe in Boston, the Paddock in Fitchburg, and several others in Worcester with bandmates Julian Wagner ’22 and Zac Loureiro ’20. Machado’s YouTube Channel draws more than 10,000 followers to enjoy her vocal and acoustic guitar performances, and she even recently released her first single, “Damage Is Done,” under her artist name, Annie Wallflower.

“All of the courses I took and performances I was in exposed me to genres of music I otherwise would not have learned about,” Machado said. “Having that ear training of learning about music from different time periods and cultures throughout history has helped me become a well-rounded composer and performer. Being able to perform multiple times every semester, whether it was solo on a stage or with the jazz band in a common lounge on campus, has really helped shape a performer in me.”

“Having an artistic background is so important,” said McKenna-Yeaw. “I think it’s hugely important to innovation, and to any kind of growth in terms of – even business. I think the one thing that a lot of businesses are looking for is the creative mind. Those are the students who will be important for our future, because I really do believe that without creativity, you’re just not going to create anything new.” 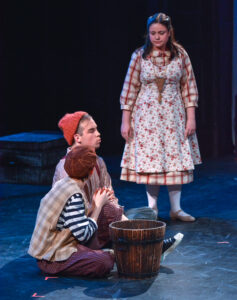 A passion for costume design brought Bellalorraine Carey-Hicks ’21 to Worcester State, where she recently became the first graduate of the new B.A. in Theatre program. She spent three years working as an assistant in the department’s impressive costume shop and also starred in several theatre productions during her time at Worcester State. Among her favorite roles was Tiresias in Oedipus the King.

In addition to being the new major’s first graduate, Carey-Hicks swiftly landed a full-time teaching position at YouthBuild Worcester, a nonprofit organization committed to providing youth with a community base and support network, all while continuing her studies at Worcester State as she pursues a Master of Arts in English.

The competitive edge that helped her land the position was her performance experience. “I teach four core subjects in addition to leadership training, but I was actually hired because of my theatre degree,” Carey-Hicks said. “For most of these kids, they are individuals with whom public school and traditional academics didn’t work out, so a standard classroom setting wasn’t something that was going to be productive for them. The new director wanted someone who was a bit more hands on and would take the kids outside. And we do learning-based activities and things which are really hands on and have them up and moving. Today, we did a cleanup out in the community.” 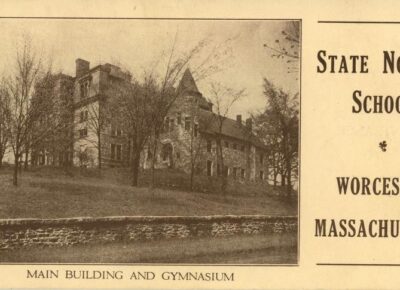 Editor’s Note: This year, as the city of Worcester has marked the 300th anniversary of its incorporation as a town, the city’s rich and complex history has been center stage. Worcester State . . .