‘The Yellow Dress’ Shows the Harsh Reality of Domestic Violence

“I know that I did the right thing to leave him; it’s just that I didn’t know that Rick doesn’t take ‘no’ for an answer.”

So says the tragic main character Anna in “The Yellow Dress,” a one-woman play that seeks to educate audiences about the dangers of domestic violence. The play was recently presented in part by Worcester State University for a standing-room-only crowd of approximately 200 students.

The production was introduced by Lori Dawson, Ph.D., director of the Women’s Studies program, and Patricia Marshall, Ph.D., associate vice president for academic affairs. The presentation of “The Yellow Dress” at WSU was given in remembrance of former WSU student Candace Allen Scola, who was found dead in her home in 2002 and is believed to have been a victim of domestic violence.

“The Yellow Dress” is part of Deana’s Educational Theater, a Massachusetts-based organization that performs educational plays and workshops that deal with domestic abuse and bullying. Deana’s Theater has performed works across the country for more than twenty years, with “The Yellow Dress” having been adapted for high school, college, and military audiences, and offered to over 20,000 people.

At the end of “The Yellow Dress,” the lead actress Emma Goodman led a group discussion with the students to talk about the play and the facts and falsehoods about domestic violence. As Goodman explained, domestic violence and relationship abuse affect people from all walks of life. She noted that both the abuser and the abused need help in recovery from their destructive lifestyles. Most important, said Goodman, is for others to offer support and understanding to those who are in abusive relationships and not to ignore them.

“A lot of times, people think that it’s not their problem,” she said, “and things continue to get worse.”

Students in attendance were made aware that the University provides counseling services for any student needing services (more info at WSU Counseling Services) and that University Police (508-929-8911) should be called to report any crime. 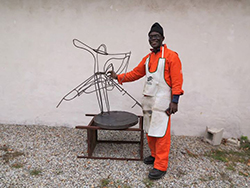 Artists Share Nigerian Culture and Creativity during Visit to WSU

When visiting artist Mathew Ehizele was asked how his sculpture was progressing at the Worcester Center for Crafts, he broke into a wide smile and responded with an enthusiastic “excellent!” Even . . .