Adam Zahler (Visual and Performing Arts) is directing the Titanic Theatre Company’s play, “Wonder of the World,” written by David Lindsay-Abaire, which will run July 24 through August 8 at The Arsenal Center for the Arts Black Box in Watertown, Mass.

Three Worcester State University students are assisting with the production: 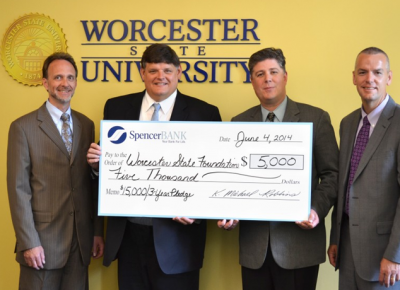 SpencerBANK donated $5,000 as part of a 3-year, $15,000 pledge to the Worcester State Foundation. This donation will go toward the Foundation’s annual scholarship program and will be used . . .