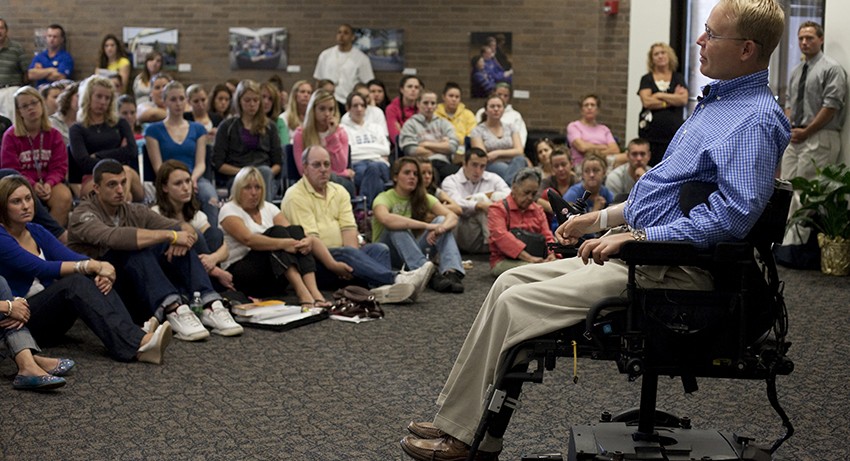 Travis Roy: ‘A Positive Attitude Will Take You Further in Life’

Travis Roy first entered the national stage on October 20, 1995, when, only 11 seconds into the first shift of his college hockey career at Boston University, he shattered his fourth and fifth cervical vertebra, severely damaging his spinal cord. Left a quadriplegic, with no feeling below his shoulders and limited movement only in his right arm, Travis has faced his disability with the same sense of optimism and determination that distinguished his hockey career. He returned to BU less than a year after his accident and completed his degree in public relations in May 2000. Since graduating, Travis has written the book Eleven Seconds, based on his life experiences before and after the accident.

“I’ll never forget standing on the blue line as they played the national anthem,” he told the rapt crowd in the Student Center’s Blue Lounge.  “I lost my balance, my motion took me into the boards and although my brain was sending messages to my body to move, I could not get up.”

He knew he was in trouble when his dad came to him and he still could not stand.  “The next couple of months were tough.”  But Roy said a positive attitude go him through.  “I’ve learned that a positive attitude will take you further in life than almost anything else. He also learned that the core values he needed were, love, pride respect and a positive attitude.  “Let the people around you know how you feel about them.  It should be a daily occurrence, not reserved for special occasions.  The first thing I plan to do when I get up out of this wheelchair is to hug my mom, my dad, my brother and my sister.”

Since his college career, Roy established the Travis Roy Foundation to help spinal cord injury survivors and to fund research into a cure. Since then, the foundation has distributed more than $3 million to research projects and rehabilitation institutions across North America.

Worcester State College is one of the best colleges and universities in the Northeast according to The Princeton Review. It is the only state college in Massachusetts to have this designation six . . .