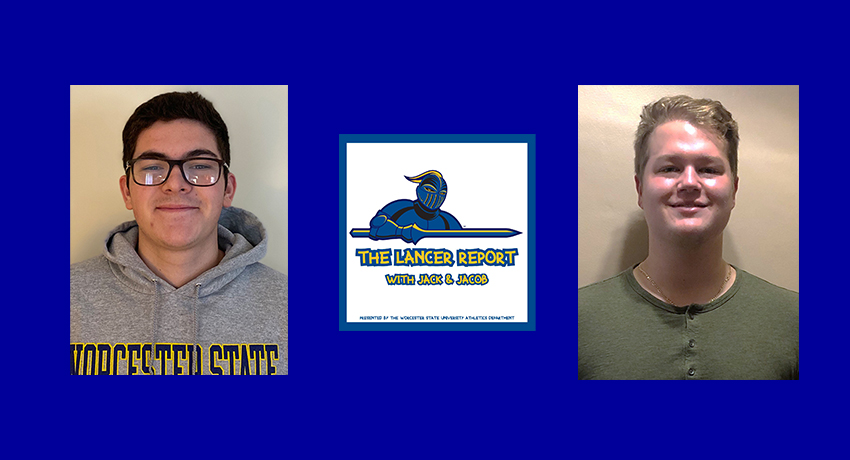 Senior Jack Simone ’21, a communications intern in the Athletics Department, has taken a new approach to sports promotion at Worcester State by creating a podcast with classmate Jacob Frazier ’21, all while balancing writing for his own blog and anchoring two personal podcasts.

Simone’s love for sports communication started at a young age, but it was not until recently he realized he wanted to get a head start at applying his passion to a career in sports media.

“As a kid I was obsessed with keeping little journals and writing about my favorite players,” he says. In fact, he still has the little green book he wrote in about his favorite baseball players when he was only seven or eight years old. Around middle school, his interest shifted from baseball to basketball. “It was around the time they hired Brad Stevens and were running out lineups with Jeff Green and Evan Turner. Those were some very unfortunate teams back then. Ever since then, though, I’ve been hooked,” he explained.

As a senior in high school, he realized he could make this hobby into something educational. “My friend Danny and I joined the school newspaper to help run their sports column. I’d always loved basketball, but my love for writing about it took off from there.”

Once he hit college, Simone threw around the idea of starting a sports blog with his friends, but nobody ever seemed interested enough to join him. The first semester of his junior year he decided to go for it alone, and created his blog Banner Town.

“I wanted a place I could write my thoughts that I could control completely.” Simone was very lucky to be approached by Adam Taylor, who covers the Celtics for CelticsBlog. “He’s been continuously helpful to me,” Simone says.

When he first started Banner Town, he had no following. Using some knowledge of social media promotion, he started actively Tweeting and promoting his content which gained him followers. Figuring out who to follow to gain a reciprocated follow took some trial and error, though.

“There was a lot of just following people so they would follow me back. It wasn’t until a recent talk with Adam (Taylor) that I realized I shouldn’t follow people unless I actually care about what they post. I ended up unfollowing a lot of people, but now my Twitter is full of people who actually appreciate my content.”

Facebook groups have also been helpful to Simone when promoting his work. Searching up specific Celtics fan groups gives him a place to show his content to the exact target audience. “People there will eat that content up,” he says in regards to the fan groups.

Expanding his work even further, Simone took on a platform that was completely new to him: podcasting. “I currently run two podcasts, but From the Rafters is my more developed one.’ It covers the Boston Celtics and the rest of the NBA. My newer podcast, Within Heckling Distance, is a more of an unfiltered show. It’s just my three friends and me talking about whatever we want, loosely covering the sports world with a comedic twist.”

Simone had no experience with podcasting before starting up From the Rafters. He recalls starting with nothing but a microphone, his friend, and his brother. The three started recording and just went with it

from there. He cited Barstool Sports as a big influence on his content, especially for Within Heckling Distance which is more of a comedic entertainment podcast.

Simone has interviewed guests such as Dan Greenberg, who covers the Celtics for Barstool Sports, Max Lederman of NBC Sports Boston, and Masslive News writers John Karalis and Tom Westerholm.

One of Simone’s long-term goals for his From the Rafters podcast is to interview either Marcus Smart or Grant Williams of the Boston Celtics. His long-term goal in regards to growing his brand is to acquire more people to help him create content and stay consistent. He already has one partner and some staff writers as well.

The Birth of the Lancer Report

Simone was able to take this personal hobby and incorporate it into his internship to gain even more professional experience and set himself on the right track for a promising career in sports media. “I did work study for the athletic department in previous years, so I already knew about the internship from working closely alongside it. It just seemed like a great opportunity to improve my skills in the world of communication,” he says.

As of this fall, Simone and co-anchor Jacob Frazier have begun the first ever Worcester State Athletics podcast, The Lancer Report. Simone and Frazier were introduced by Curtis Fraser, the sports information director at Worcester State.

“They both expressed a lot of interest in starting a podcast when I was going through the hiring process,” says Fraser. “The cancellation of games due to the COVID-19 pandemic has forced sports information directors across the country to get creative with the content that is going out. It was the perfect opportunity to get a podcast up and running, and Jack and Jacob were eager to take on the challenge.”

“I became interested in sports from a very young age,” says Frazier. “It started off with the Bruins because my dad was a huge fan his whole life too, so he introduced them to me at the age of 5 by bringing me to a Maple Leafs-Bruins game. I’ve been hooked since.”

The podcast runs about 30 minutes to an hour and highlights a different guest each episode. The show’s first guest was Director of Athletics Michael Mudd, while episode two featured field hockey players Lexie Panagiotopolous and Jess Hopkins. The show’s most recent guest was new head football coach Adam Peloquin.

According to Simone, the most rewarding part of podcasting is having the opportunity to meet and speak with people he would not have otherwise. He is sure that starting to make these connections with people in the sports media industry will help him down the line, where he hopes to work for the NBA media. “All of this is just a great experience and something super useful that I can put on my resume and show to those who could eventually want to hire me,” he says about his plans for the future.

Frazier is also using this valuable experience to prepare him for a rewarding career. He is ambitious enough to aspire to take on many realms of sports media.

“I would love to work for the NHL in media relations. I love video editing, and have grown to love recording podcasts. I don’t have an exact direction I want to take for my future yet, I just know that working within the NHL is my long-term goal.”

The Lancer Report with Jack and Jacob can be found on Anchor.FM, Spotify, Apple Podcasts, or wherever else you listen to podcasts. New episodes come out every one to two weeks. 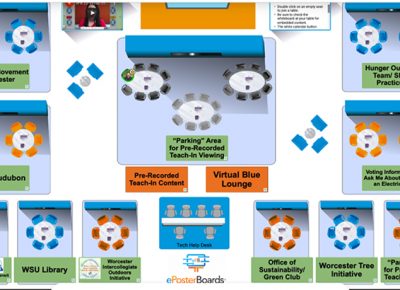 Environmental and Climate Justice is the theme for the 2020 Sustainability Fair, which will take place on Wednesday, Oct. 21, and Thursday, Oct. 22, in a virtual format. The popular annual event . . .