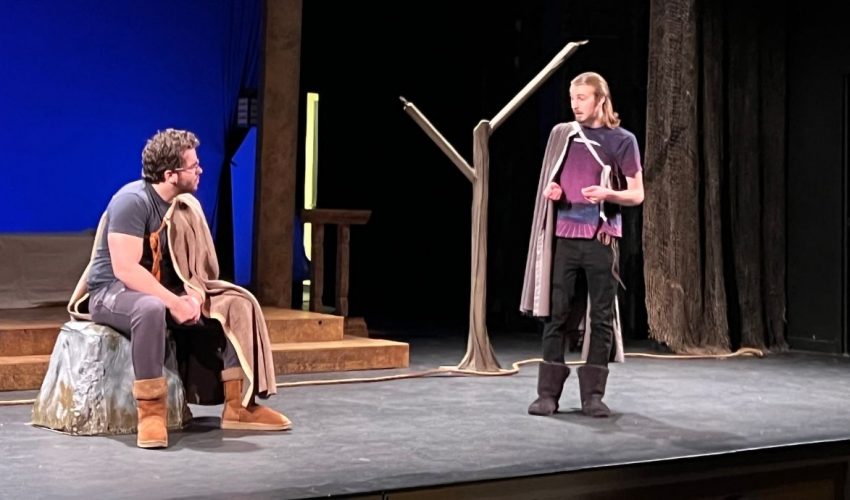 The Visual and Performing Arts (VPA) Department is announcing a variety of opportunities to view in-person exhibits and performances by Worcester State students through its annual “Extreme Artery” initiative, an end-of-school-year blast of presentations slated to run from Tuesday, April 26 through Thursday, May 5.

In addition to returning to an in-person format for the first time since the start of the COVID-19 pandemic, this year’s “Extreme Artery” pays tribute to two of the department’s founding members, Catherine Wilcox-Titus and John Howell Hood, faculty emeriti who retired this semester and remain active with the department’s work. During their time as full-time faculty members, Wilcox-Titus and Hood contributed to the creation of the department’s new Art and Theatre majors, respectively, and led renovation projects for the Mary Cosgrove Dolphin Gallery and Fuller Theater, spaces that have become major cornerstones on campus for providing VPA students with lab-based, experiential learning opportunities.

“With approximately 700 Worcester State University students taking Visual and Performing Arts classes today, we’re pretty excited about the opportunity to showcase as much of their great work as possible in upcoming days,” said VPA Chair and Professor of Theatre and Interdisciplinary Arts Sam O’Connell. “As we near the end of a school year that has featured the addition of two new majors, it’s an honor for us to be able to pay tribute to Cathy and John, two of the department’s founding members who continue to influence visual and performing arts offerings on campus.”

Today, for example, the gallery and the theater serve as venues for several of the spring 2022 “Extreme Artery” events. A schedule of Extreme Artery highlights is as follows:

The Worcester State University Chorale presents “The Journey Home” at 7:30 p.m. in Sullivan Auditorium. Directed by VPA Professor Christie Nigro, the event marks the a capella group’s return to in-person performance. The concert is free and open to the community. Contact cnigro@worcester.edu for more information.

Community members are invited to stop in the Mary Cosgrove Dolphin Gallery located in the Ghosh Science and Technology Center between 11 a.m. and 5 p.m. to view the Spring 2022 Thesis Art Exhibition, a collection of moving work by Trang Duong (Serena), Logan Hampsey, Emily Parish, Mark Parella, Julian Wagner, Abigail Snopkowski, Jonathan Paine, Jennifer Caswell, and Angie Morales. Directed by VPA Professor Stacey Parker, the gallery will showcase the exhibition through May 13. Visit wsuvpagallery.weebly.com for gallery hours or contact Gallery@worcester.edu to make a viewing appointment. The show is free and open to the community.

The community is invited to attend a WSU Jazz Concert at 3 p.m. in Sullivan Auditorium featuring work ranging from original composition to jazz classics that will be performed by Worcester State’s jazz combo and jazz orchestra. Directed by VPA Professor Jeremy Cohen, the event is free and open to the community. Contact VPAMusic@worcester.edu for more information.

Worcester State Theatre presents Tom Stoppard’s “Rosencrantz and Guildenstern Are Dead,” an existential tragicomedy and sideways take on Shakespeare’s “Hamlet.” Directed by VPA Professor Kim Carrell, the show opens at 7:30 p.m. on Thursday, April 28, in Fuller Theater, located on the second floor of the Administration Building, continues at 7:30 p.m. on Friday, April 29, and Saturday, April 30, and concludes with a 2 p.m. matinee on Sunday, May 1. Tickets are $7 for students, $10 for seniors, and $15 for general admission. Visit worcester.edu/VPABoxOffice for online purchase. Tickets are also available at the Student Center Information Desk and at the door. Contact the Box Office at VPABoxOffice@worcester.edu or 508-929-8843 for more information.

“Whenever we tackle a new project, theatre artists always ask ourselves ‘Why this play, and why now?’” said production director and Worcester State Professor of Theatre Kim H. Carrell. “As we work on ‘Rosencrantz and Guildenstern,’ I’m realizing just how potent those questions are in this instance. They constantly search for answers and look for connection in order to make sense of the chaos around them – and that is essentially what all of us have been doing during the pandemic. When the answers we find don’t make sense to us, connection is what gets us through. But in Rosencrantz and Guildenstern’s case, the answers were already written. It’s just that no one gave them that part of the script and that makes connecting really difficult, and sometimes hilariously so.”

VPA Music presents “Mosaic of Music” at 7:30 p.m. in Fuller Theater. Coordinated by VPA Music Professor Kyle Martin, the event will showcase a variety of styles and diverse work by Worcester State students of spring 2022 instrumental and vocal music lessons with VPA Music faculty. The event is free and open to the community. Contact VPAMusic@worcester.edu for more information.

In addition to those in-person events, VPA will showcase a variety of work – ranging from masks by Creating Cultural Forms course students to original music compositions – throughout the more than two weeks of Extreme Artery via the following social media pages: @WSUVPA on Instagram and Twitter and @VPAatWorcesterState on Facebook.

The legacies of Wilcox-Titus and Hood are “enormous contributions that will be felt by the department for years to come,” said Theatre Professor and former Department Chair Adam Zahler.

Hood was initially inspired by the arts as the youngest of four siblings in a family that encouraged him to enter them. A professor of scenic design at Worcester State since 2003, he enjoyed the University’s smaller class sizes and the opportunity to mentor students individually, following instruction at colleges such as Montana State University, Arizona State, and the Pacific Conservatory of the Performing Arts in California.

“I would like to thank all of the faculty, staff and students of VPA, present and past, and all of the great friends and colleagues I’ve known at WSU,” Hood said. “I also want to thank those at the Fuller Foundation, without whose very generous donation we would not have been able to renovate what is now the Fuller Theater.  I am proud to have worked at Worcester State and will miss creating and collaborating here.”

According to Zahler, the renovation of Fuller Theater leaves a tremendous impact.

“We started being able to do larger shows, greater repertoire, and just different kinds of productions with larger casts, which was really pretty great,” Zahler said. “And along with the larger casts, we saw a growth in students taking acting classes. When I first came here, acting was offered once a year, maybe, and now, we run two to three sections per semester of acting. So it’s more than doubled.”

Next door, in the Ghosh Science and Technology Center, during the same year of 2009, Wilcox-Titus worked tirelessly at leading renovations in what is now known as the Mary Cosgrove Dolphin Gallery thanks to a $25,000 donation from Alan Fletcher with supplemental support from the Worcester State Foundation.

Prior to the renovation, the space for Worcester State artists had featured a cobbling together of spotlights and removable walls.

“Fortunately, the space itself was perfect for a gallery in that it had a glass wall so that people walking by could look inside and walk in,” Wilcox-Titus said. “It’s accessible on the first floor, and it’s easy for the public to find, with parking nearby. Working with [Worcester State Art Professor and renowned artist] Michael Hachey was vital, as he provided consulting and gave guidance on how we could proceed through the renovation. When the space became available, Michael jumped right on it and was instrumental in making the gallery happen.”

Today, thanks to the renovation, Wilcox-Titus said the space gives off a larger-than-reality feel because of the track lighting, black ceiling and mechanicals, and glass wall – all contributing to it being one of the best college galleries in the state system.

“And right from the beginning, we wanted to be sure that we served the larger community as well,” said Wilcox-Titus, a graduate of both Boston University and the University of Toronto who taught Global Art History, Art Since 1950, and Life Studio at Worcester State. “We’ve held invitational shows and open calls based on themes, and we have really been extremely pleased with the community’s response, attendance, and feedback. We’ve always accepted and promoted the idea of this broader serving to Worcester State by serving the community. We’ve brought the wonderful talents of the area to campus so our students could have a firsthand experience with them.”

For more information about the gallery, Fuller Theater, the upcoming Extreme Artery presentations and other music, theatre, and visual arts offerings, contact the VPA Department at VPA@worcester.edu. 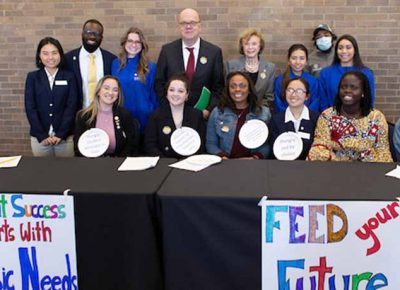 Senator Harriette Chandler: “It is time to end hunger on campuses”

Victoria Porteiro knows what it’s like to go to class on an empty stomach. The Worcester State graduate student is food secure now, but that wasn’t always the case during her undergraduate years . . .