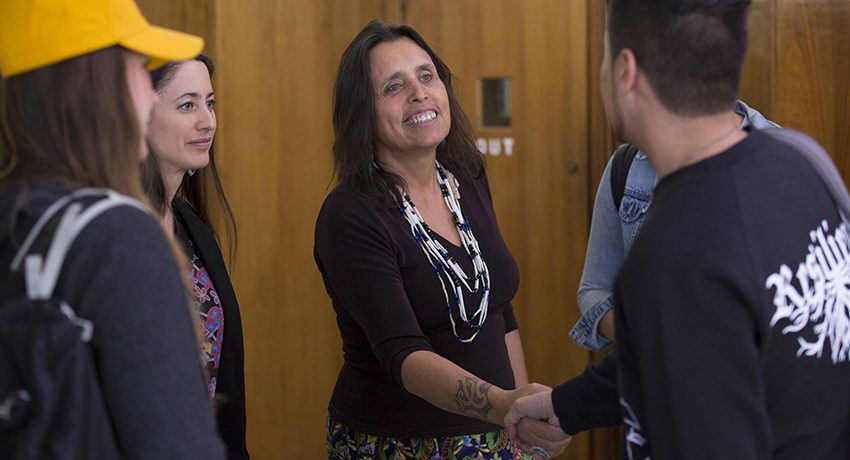 Author and activist Winona LaDuke opened her recent talk at Worcester State University with a photo of a buffalo herd roaming wild on the prairie, and said, pointedly, “This is when America was great.”

The comment underscored her message: We must protect natural resources to create a future that our children will find worth living, one that restores the health of our planet.

LaDuke knows a lot about lakes. She is a member of the Ojibwe tribe on the White Earth Indian Reservation in northewestern Minnesota. She says that ecosystem was threatened when Embridge, Inc., a Canadian natural gas company, announced plans to build a pipeline through the White Earth Reservation, thus threatening the waters of Big Rice Lake.

“We knew that wasn’t going to work for us, so we went out and organized, and eventually we forced the state of Minnesota to do an impact study on the proposed pipeline,” she said. Four years later, after attending every public hearing, Embridge announced that they would no longer pursue building the pipeline on the reservation.

“It’s possible to defeat stupid ideas, but you must be very persistent and work very hard,” LaDuke said.

Since then, LaDuke has played an active role in protecting water rights for native reservations through Honor the Earth, an organization she runs. She was on the front lines of the Standing Rock protests from 2016 to 2017, where an encampment was established on the Standing Rock Indian Reservation in North Dakota to oppose the construction of the Energy Transfer Partners’ Dakota Access Pipeline.

Both pipeline projects reflect what’s happening in the fossil fuel industry today, she said. As fossil fuel sources continue to decrease, energy companies have become more engaged in risky extraction methods that she calls “extreme behavior,” such as offshore drilling and fracking. This extreme behavior has become an unhealthy addiction, resulting in energy companies becoming untrustworthy and impulsive, especially in the United States.

LaDuke stressed that she is not interested in a radically abrupt divestment of fossil fuels, and prefers an “elegant” transition out of the fossil fuel era. To do so, Americans would have to have difficult and long conversations regarding the national economy, poverty, race, and other aspects of society that were not usually associated with the debate over climate change. The necessity of the conversation harkens back to the words of the great Native American leader Sitting Bull, who asked that minds “be put together to see what kind of future we could make for our children,” she said.

“If you think about what your future is going to be, what this community is going to be like 50 or 100 years from now, where our food and water are going to come from, how we will treat each other…those are future questions for each community, not just native peoples’ questions,” she said.

The author of several books, LaDuke also has served as a media source and she now spends time enjoying her extended family and working with the Ojibwe community on the reservation. 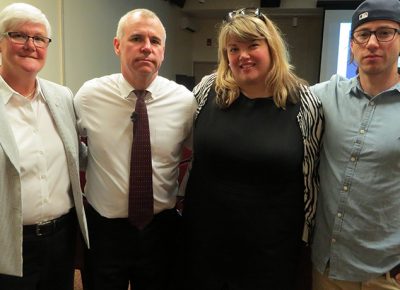 The father of Worcester State University student Emmett Scannell, who died of a heroin overdose in April 2016, spoke to about 70 faculty, staff, and students gathered in the North/South Auditorium . . .