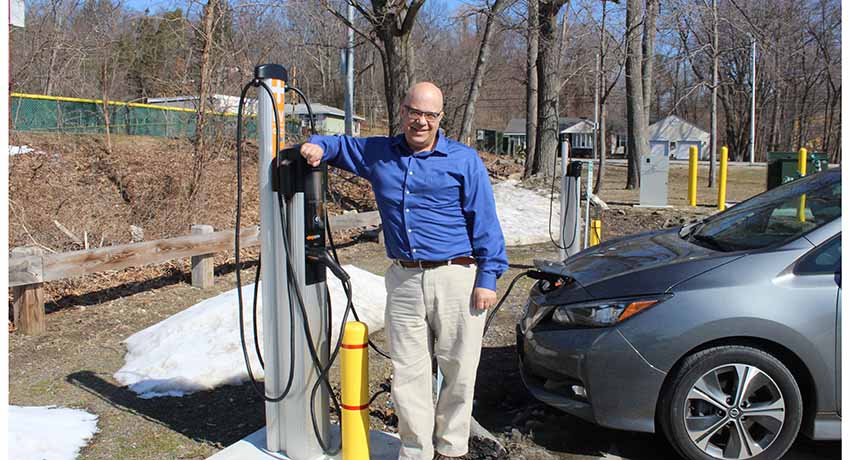 Steve Bandarra gets a real charge out of his electric vehicle.

“It’s quiet and smooth, and it’s quick,” Bandarra, WSU’s sustainability coordinator, said of his Chevy Bolt. “I mean, you press on the accelerator, and it just goes. There’s no loud engine revving, there’s no gears jerking the car. It just takes off.”

A similar enthusiasm for EVs has taken hold among an ever-increasing number of drivers to such a degree that the University’s four dual-headed charging stations on campus were in use over 80 percent of the time. To head off an impending crunch, four new charging stations were recently installed in the north parking lot across from the Ghosh Science & Technology Building and Wellness Center. Since each can handle two cars, the new stations bring the number of available charging spots on campus to 16.

Steve Bandarra, WSU’s sustainability coordinator, at one of the new charging stations in the north lot.

Previously, one station had been installed near the Administration Building, two outside of the parking garage, and one inside the garage. “These new stations are important because we had one in the middle of campus and three over on the south side of campus, but we had none on the north side. This now gives us a nice spread of chargers throughout the whole campus,” Bandarra said.

The cost of the installation project was almost entirely paid for by grants and incentives, mainly from National Grid and the Massachusetts Electric Vehicle Incentive Rebate Program, a state initiative designed to encourage installation of charging infrastructure and the purchase of electric vehicles.

EV owners can charge their cars for free at Worcester State, but the relatively small cost of the electricity is offset by the more than $900,000 in energy savings WSU realizes each year through energy saving improvements such as the LED lighting that has been installed throughout campus and by obtaining discounts from solar farms through net metering credits.

Will users be charged for charging at some point in the future?

“That day will come, but for now the free electricity is meant to be an incentive and the state has asked us to lead by example,” Bandarra said. “It’s a ‘build-it-and-they-will-come’ kind of thing. We want to encourage the purchasing of electric vehicles because it just makes sense in so many ways – for the environment and because we don’t want to be forced into doing things like buying Putin’s oil or drilling in Alaska,” he said.

The charging stations also help the University, as a state institution, to comply with Executive Order 594, known as Leading by Example: Decarbonizing and Minimizing Environmental Impacts of State Government. The order was signed by Gov. Charlie Baker last April with the aim of helping reduce carbon impacts by 45 percent from 2010 levels by 2030 and reaching net zero around 2050 to keep global temperatures from rising more than 1.5 degrees Celsius.

The new stations also help the University meet carbon-reduction goals made through the Presidents’ Climate Leadership Commitments, an environmental initiative signed by presidents and chancellors of colleges and universities nationwide.

“We have seen a notable shift toward electric vehicles, and I am excited that these new charging stations double the charging capacity here at Worcester State,” President Barry M. Maloney said. “These stations are among multiple steps we have taken toward effective carbon reduction and are a clear sign of our commitment to serve our students, staff, and faculty members who are driving their EVs to campus.”

Bandarra says that once people drive an electric vehicle, they will likely want to own one. “Everything about them makes so much more sense,” he said. “It’s a different way of thinking, and you don’t realize it until you actually drive the car.”

He used to own a Chevy Volt, which is both battery and engine operated, as opposed to the Chevy Bolt which is all-electric. “The Volt would go about 65 miles on the battery, and then the engine would kick in,” he said. “We loved driving it so much when it was on battery that when the lease was up, we immediately switched to a Bolt.” 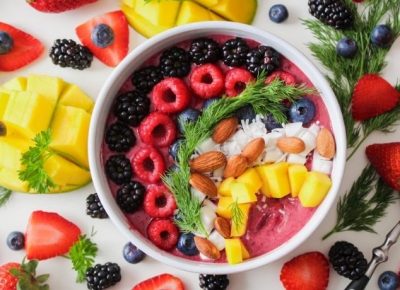 Worcester State University continues to make student wellness a priority with the launch of CampusWell, a digital platform with evidence-based content and a library of student support resources.  CampusWell is both a website and a customizable app that can be downloaded in the Apple store on Google Play. It began as a publisher for college health centers and has evolved into a versatile . . .