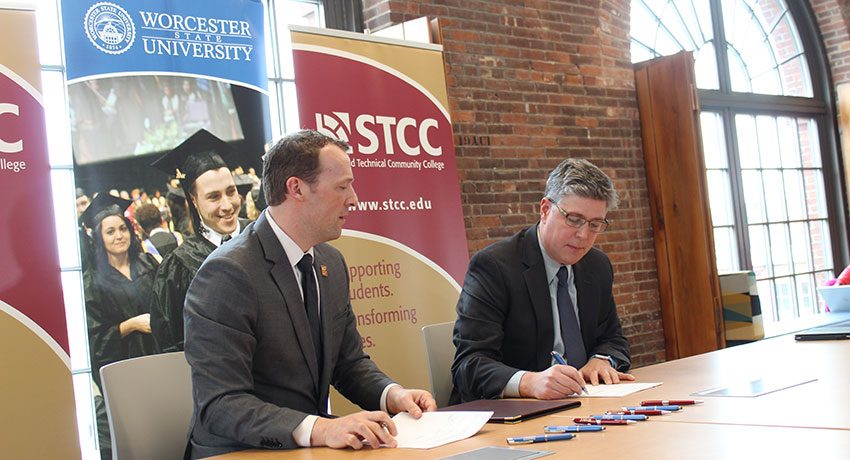 “This is an exciting day for Worcester State and an exciting day for STCC,” Maloney said, at a signing ceremony Friday, April 5, on the STCC campus in Springfield. “Today we get to announce a collaboration between two fine public institutions who continue to serve gateway cities and the students therein. This collaboration will pay big dividends for Worcester State in terms of its enrollment, and for one of our cornerstone programs, urban studies.”

The subject of cities as a focus for college students could not be any more important or relevant than it is today, Cook said.  While there are no simple answers, endemic poverty and the opportunity gap it creates, especially within communities of color, are among the many complex problems urban studies students will be trained to tackle, he said.

“Through this pathway, between Springfield Technical Community College and Worcester State, we lend our resources—teaching and learning—to the effort of enhancing our cities in Central and Western Massachusetts,” Cook said. “Today is a great day.”

STCC students will be able to get a sense of what Worcester State is like even before they enroll as juniors, according to Thomas Conroy, Ph.D., chair of the Urban Studies Department at WSU.

“This is a great partnership for our students and the students from STCC,” Conroy said, in an interview a few days before the signing ceremony. “We’re trying to build into the curriculum moments where students can do site visits or maybe even online learning so we can introduce their city to our students our city to theirs.”

In anticipation of the agreement, the Urban Studies Department at Worcester State has already started to change parts of the curriculum to align more closely with STCC’s offerings. For example, “They have a class that they created called ‘The Immigrant City,’ and we’re starting to pilot one on our side that will be one of these moments of exchange between us,” Conroy said. It won’t be the same course, but it will have some shared objectives, he added.

Urban studies helps students develop an in-depth understanding of the complex challenges facing our increasingly urban world. Urban studies majors traditionally pursue careers such as municipal planning, public policy, community organization, and nonprofit management. More broadly, urban studies is the highly interdisciplinary study of cities and the people in them, but the training prepares students for a wide variety of careers.

“I know it sounds cliché, but it’s pretty much one of those things where you’re able to do a ton of different things with it,” Conroy said. “We have graduates who are judges, professors, lawyers, and legislators. We have some who are city planners, social workers, teachers, service professionals, and we even have the Iron Chef (Geoffrey Zakarian), although we didn’t teach him how to cook. But they all come out with a body of knowledge that understands that the city is for its people, not for its buildings, and that to understand how cities operate you need to think on multiple disciplinary planes simultaneously.”

The new partnership will opens an important educational pathway for many students, said Russ Pottle, dean of the School of Humanities and Social Sciences at Worcester State. “The ability to transfer seamlessly from an associate’s degree program to a bachelor’s degree program—and then with the potential to complete a master’s degree in only one year—is a real opportunity for students in Central and Western Massachusetts to pursue career interests in their immediate geographic area,” he said.

Maloney and Cook thanked the faculty and staff of both institutions for pulling the new agreement together on a tight timeframe. “We’re enthusiastic cheerleaders for this project but, as usual as far as the heavy lifting goes, presidents are in the back of the bus on that,” Maloney said. On the Worcester State side, Maloney commended several people including Conroy, Pottle, Provost and Vice President of Academic Affairs Lois Wims, and Vice President for Enrollment Management Ryan Forsythe. 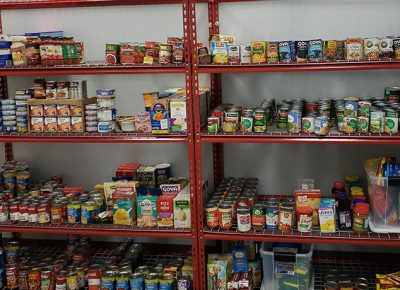 An official ribbon-cutting ceremony at Worcester State’s new food pantry will honor the memory of the late Thea Aschkenase ’07, who passed away on Saturday, March 23, at the age of 95. This . . .