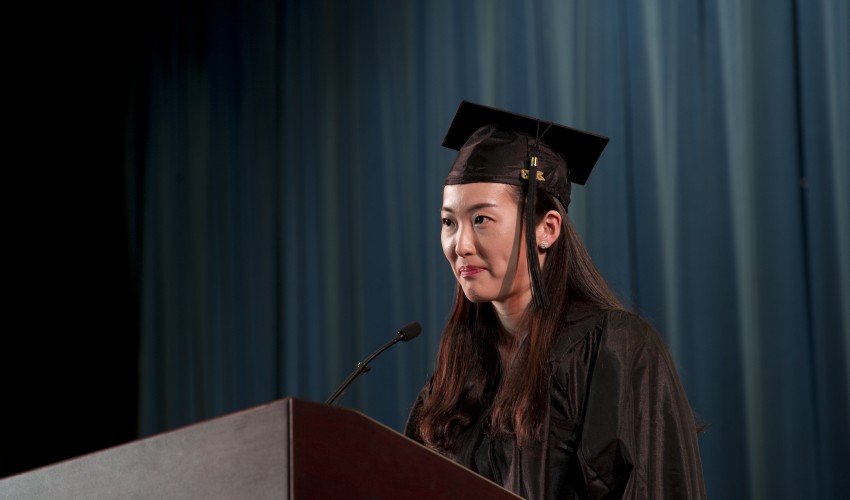 Worcester State University’s Graduate School held its 59th annual graduate commencement and hooding Monday, May 13 in the Sullivan Auditorium and awarded 204 graduate degrees and certificates of advanced graduate studies. The majority of degrees conveyed were in education. (Click here to view the Facebook photo album.)

WSU President Barry M. Maloney presided at the ceremonies, and Board of Trustees Chairman John P. Brissette conferred the degrees and certificates on behalf of the WSU trustees.

Dr. Sebastián Vélez, assistant professor of biology at WSU, delivered the commencement remarks. Dr. Vélez is a scholar in the fields of systematics, population genetics and environmental biology. He is widely recognized for his dedication to teaching, and is the founder and executive director of Children of the Border, a humanitarian project based in the southern border region between Haiti and the Dominican Republic that runs a clinic, repairs schools and treats malnutrition.

Vélez urged graduates to conquer their fears. Before advising students at WSU, he advised students at  Notre Dame University, Harvard University and MIT, and what holds so many back from pursuing their dreams is fear.

He told of being part of a post-earthquake humanitarian team in Haiti in 2010 recognized by student assistants for bravely carrying on their work in spite of  the threat of danger every step of the way. “So even though we appreciated their kindness and their words, I remember leaving with a bittersweet taste, thinking that they had given their prize to the wrong organization, as the way we saw it, we were just a bunch of cowards living in fear while pushed to do the only thing anybody would do under the same circumstances,” he said.

And when his brother was dying of cancer, Vélez asked him if he was afraid of death and suffering. “And he told me that yes, that actually he was very afraid, but that he still did it,” Vélez said. “That he had heard it from soldiers and veterans of war that courage was not the lacking of fear, but instead experiencing fear, the terror of war, and still doing what they had to do.”

Finally, Vélez told of his experiment to see if he could conquer his fear of surfing, cold water, rough seas and drowning. “So on this mission, of finding out how does one come out on the other side of fear, one by one I divided the fears and split them into small tasks just hard enough that I would still experience fear and do it anyway, but not so big that would paralyze me,” he recalled.

“So do yourself a favor,” Vélez said, “and go out today and do something, that you are afraid of, do something despite of your fear—or better still—because it gives you an overwhelming sense of fear, and then go get that Ph.D., get funding for that startup business, and bring us closer to ending poverty or to understanding the genetics of cancer.”

Lu Chen, receiving her master’s of science in nonprofit management, was the student speaker. An international student from Shanghai, China, Chen congratulated her fellow graduates for reaching their latest educational goal: earning an advanced degree. “We should be proud,” she said. “We have been diligent and we all deserve to experience the joy of this moment.”

She noted that she has learned the value of lifelong learning, exposing oneself to a different culture, learning outside the classroom, and becoming more empathetic to the situations and perspectives of others. Her “experience in the American classroom has now fully illustrated” the old Chinese saying by Confucius: “Teaching is learning, and learning is teaching.”

“As we reach higher levels of education, we must shift our focus gradually from ourselves to the world around us,” Chen said. “The value of being more knowledgeble and educated is the ability to have a say in the world, for yourself and for those who cannot speak for themselves.”

The human consequences of globalization point this out, from the more than 1,000 people who died recently in a garment factory in Bangladesh to the “Made in China” phenomenon, she noted. “They are ordinary, hardworking people just like us, devoting themselves to work for a better life for their families,” she said.

Education also destroys stereotypes, Chen highlighted. “There is never just one truth. When we receive information from multiple sources with different perspectives, we get closer to the real truth and are more impartial in making judgments.”

“My dear fellow graduates, let’s keep following our hearts, keep the passions for our life and work, have guts, stay energetic and always be ready to embrace surprises,” she said.

In addition to conferring degrees and certificates to students, 29 graduate medallions were awarded for academic achievement and excellence.

In special recognition of his 15 years of service, Associate Vice President for Continuing Education and Outreach and Dean of Graduate Studies, Dr. William H. White, received an honorary graduate medallion.

“As many of you know, Dr. White will be retiring at the end of June after many years of service to the University,” President Barry Maloney said. “In his role as associate vice president, he has helped to increase enrollments in summer, winter and evenings programs and has overseen several important institutes. As the dean of the Graduate School, he has guided several new degrees through Graduate Council and the Department of Higher Education, has raised graduation requirements and has increased the number of students graduating from CAGS and master’s degrees here at Worcester State. His leadership and his passion for lifelong education will be sorely missed. It is with great pleasure that Worcester State University presents Dr. William White with an honorary graduate medallion and accompanying certificate of recognition.” 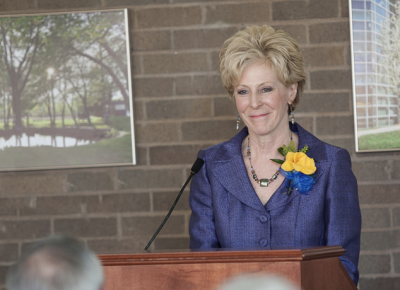