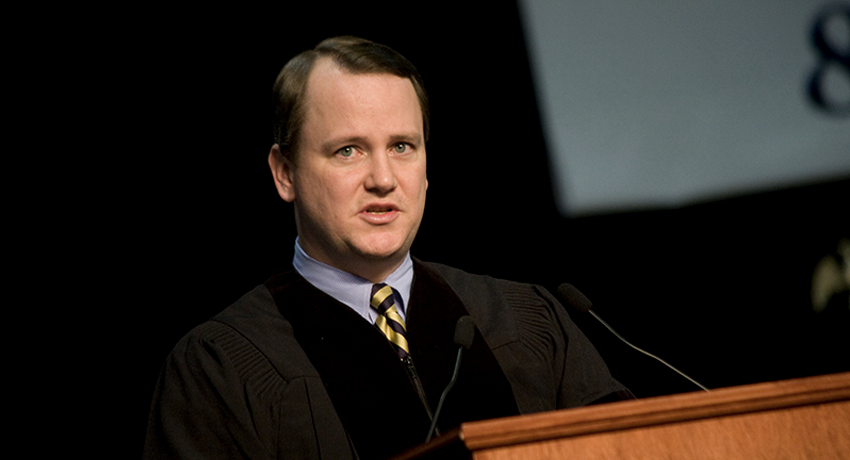 A packed crowd at the DCU Center celebrated Worcester State College’s 132nd Commencement, Sunday, May 18, which marked the awarding degrees to 855 undergraduate students and 216 graduate students. Five members of the class of 2008 were commissioned as officers in the United Armed Forces.

Massachusetts Lieutenant Governor Timothy Murray articulated the importance of the college to the city and the region—and to his own family in his keynote address.

“My father’s generation was the first in his family to have the opportunity to go to college. And for my dad, that college was Worcester State,” he said. Murray’s father went on to teach high school history for 37 years.

Murray explained that the college was an enduring image throughout his childhood. “I grew up just down the street from Worcester State,” he said. “The images of the campus—of the tall white columns on the Administration Building, the beautiful views from Chandler Street—that is what college looked like for me as a boy growing up in this city.”

As Murray grew up, attended college and law school, and was elected city councilor and mayor, his appreciation for the college grew. “As I got older, and understood more specifically how transformative education could be, and how many people worked so very hard for an opportunity to attend college, that sense of importance grew even stronger,” he said.

Murray also praised the graduates for contributing so much to the city and its residents. “When I was mayor, I saw firsthand how Worcester State College students gave so much of themselves throughout the community, but especially in the public schools,” he said.

He also applauded the college for this year’s designation as a President’s Higher Education Community Service Honor Roll School.  “Worcester State students are doing great things and helping to make this a stronger and more compassionate community,” he said.

President Janelle Ashley presented Murray with an honorary doctorate of Public Administration as part of the commencement exercises.

The college also honored Arthur Pappas, M.D., and Martha Pappas, Ph.D., with the 2008 Community Service Award in recognition of their extraordinary leadership in community improvement in education, medicine, athletics, recreation, and culture.  In presenting them with their award, Thomas M. McNamara, Vice President of Institutional Advancement, said, “In recognition of your unwavering commitment to education, medicine, athletics, and your community, Worcester State College is proud to award you, Dr. Arthur M. Pappas and Dr. Martha Pappas, the 2008 Community Service Award.”

Dr. Margaret E. Kerr, associate professor of Chemistry, received the George I. Alden Excellence in Teaching Award in recognition for her leadership in the development of green chemistry curricula, a teaching approach that reduces the use or generation of hazardous substances during chemical processes.

WSC graduate and Student Trustee Brandon Huggon received the Ella May Whitney Award as well as the Trustees recognition award.

Dr. Melvin Merken was presented with a plaque by President Ashley in recognition of his 50 years of service to the college. Professors Clement Delaney, Susan Rezen, Robert Spector, Donald Joyal, Robert Perry, and Gerald Robbins were all recognized with emeriti status.