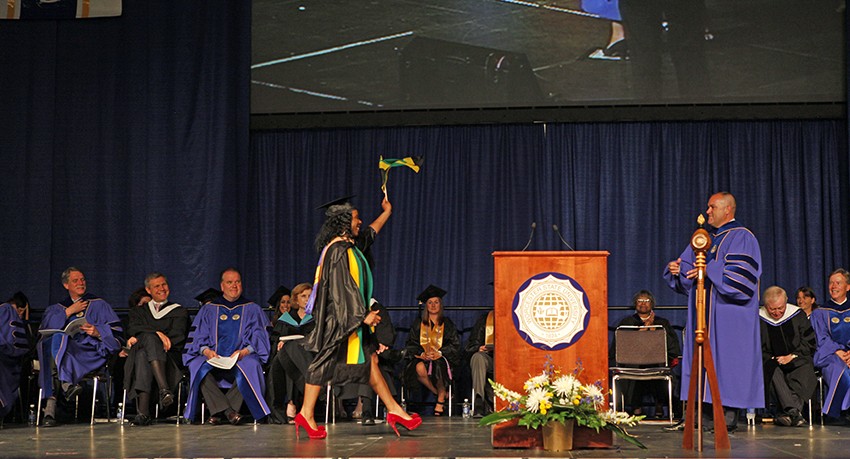 Over 4000 family members and friends attended the 135th Worcester State University Commencement, Saturday, May 14th at the DCU Center.  The university conferred degrees to 913 undergraduates and 233 graduate students.  It was the first time graduates received diplomas under the institution’s new university status.

It was the last commencement celebrated under the leadership of President Janelle C. Ashley, who will retire at the end of June.  “The university has flourished under her leadership,” said Chair of the Board of Trustees John Brissette ’88.  “We have expanded our residence halls, renovated our historic Helen G. Shaughnessy Administration Building, renovated our library, built a parking garage, improved our labs and expanded undergraduate and graduate research.  Dr. Ashley has positioned the university for greatness and we are very thankful.”

John Connolly ’62, Ed.D., who received an honorary doctoral degree, served as commencement speaker. Connolly went from being a classroom teacher to being the nation’s foremost expert on identifying top physicians. As president and CEO of Castle Connolly Medical Ltd., publisher of consumer guides to help people find the best health care, he is a frequent guest on television and radio shows including Today, Good Morning America, 20/20, and others. He is the author/editor of more than a dozen books including America’s Top Doctors and America’s Top Doctors for Cancer, and his company’s articles have been featured in numerous magazines and newspapers.

Connolly told graduates that due to increased longevity and demographic changes, a new stage in life is developing. According to Connolly, in 1930, less than 5 1/2 percent of people were older Americans. Today, one in eight Americans is older.  The fastest growing segment of American society is people over the age of 80. Connolly said a new “encore” stage of life will emerge, similar to the emergence of the new stage of life “adolescence,” did after the passage of child labor laws and rise of public education. He predicts that more and more Americans will choose to pursue a second and more meaningful career after retirement. “It presents the opportunity to do something more challenging and fulfilling,” he said.  He asked graduates, “What will your encore be?”

The University also awarded Dr. William F. O’Neil ’63 the 2011 Community Service Award. He served as an elementary school teacher, as director of the Community Education Development Center at Worcester State University and served as President of Massachusetts College of Art for nine years.  He also served as the Executive Director of the Council of Presidents of the Massachusetts State Colleges—now universities– for six years.  He serves as Chair of the Worcester Center for Crafts Board of Directors; where his leadership supports the future of arts education for both the students of Worcester State as well as the Center’s growing community of artists, crafters, and students.

Prior to commencement, WSU graduate students were recognized at the annual Hooding Ceremony Friday evening, where President Ashley was presented with a graduate medallion and certificate of recognition for her leadership during nine years as president.  The keynote address offered by Dr. Maryann H. Power featured a video-taped message offering advice to the graduates to, “be open to change, be authentic and have a sense of humor.”  She also urged them to “work hard, keep a sense of spirituality and be a lifelong learner.” 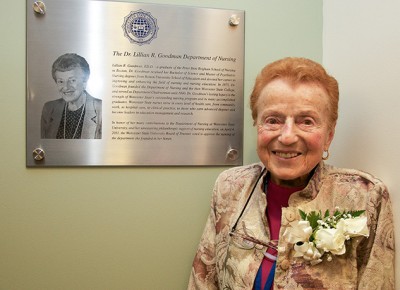 On Friday, May 6, WSU recognized National Nurses Day and the 35th anniversary of the Department of Nursing's Inaugural Graduating Class with a Nursing Symposium and dedication of the Dr. Lillian R. . . .