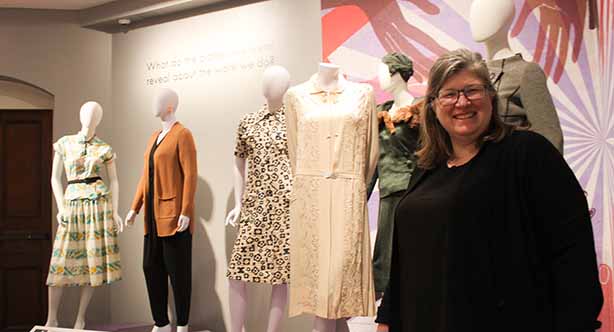 When people think of Richard Nixon, “fun” and “festive” usually aren’t the first words that come to mind.

And yet a paper dress created for Nixon’s 1968 election campaign features a splashy, youthful pop-art print and shows that, despite the liberal fervor of the time, there were young women who were excited about his campaign, not just the conservative, gray-suited men usually associated with his candidacy.

The eye-catching disposable dress is among items on display in “Pretty Powerful: 100 Years of Voting and Style,” a landmark exhibition at the Worcester Historical Museum (WHM) that commemorates the 100th anniversary of women’s right to vote through fashion and the changing roles of women.  The exhibition, which opened in October and runs through March 31, was curated by Charlotte Haller, Ph.D., chair of the history and political science department at Worcester State University.

“One of the things that I love about this exhibit is that it lets us explore the serious side of fashion, and the fun side of politics,” Haller says. “And it’s precisely because fashion is fun, and reflects people’s sense of self, and gives them a sense of joy that it’s such a powerful window into thinking about and understanding the past and politics.”

Some of the fashions in the show, such as the Nixon dress, are explicitly political. But the choices that women make in seemingly non-political aspects of their lives – such as going to work- also have political import, Haller says.  “For instance, as women began breaking down barriers and moving into male-dominated fields like business, medicine, and the law, the clothes they wore were often similar to men’s suits and were a way to signal that they belonged,” she says.

But, as the exhibition shows, women also brought their own style and spin to workwear as they broke down barriers in the workplace and in politics as well. The exhibition includes the tailored white pantsuit that state Sen. Harriette Chandler wore when in 2018 she signed the NASTY (Negating Archaic Statutes Targeting Young Women) Act aimed at protecting women at the state level should Roe v. Wade be overturned. “She wore this suit very consciously to pay homage to the Suffrage movement and the Suffragists who wore white knowing it would photograph well and be a statement of unity,” Haller says.

A part of the exhibition titled “We Wear Many Shoes” features footwear worn by Sarai Rivera ’90, the current District 4 City Counselor in Worcester. “I love the title because it encapsulates women’s experience in so many ways,” Haller says. “It shows how Sarai Rivera uses shoes in very conscious ways – a pair of pumps made out of Guatemalan fabric talks about her missionary work (Rivera is an ordained minister), some beautiful yellow shoes to talk about a bright future, and then Nike sneakers for the hard political work of going door to door.”

Project manager for the exhibition was Anne Sadick M.S. ’01, the director of development at Worcester Historical Museum.

“Pretty Powerful” is a tribute to the changing roles of women as seen through the lens of fashion,” Sadick says. “It is a look at women’s history and power from 1920-2020, telling the story through 36 garments and accessories, both a sampling of the riches of the Historical Museum’s costume collection and as an opportunity to grow that collection to better represent the diversity of Worcester.”

To help celebrate that diversity, Hawraa Chreim ’21 served as an intern during the show’s planning stages. She broadened the exhibit storyline by adding hijab fashion to the line-up. This part of the exhibition shines a spotlight on the underrepresented sector of Muslim modest fashion.

“I had a remarkable opportunity to work with a WSU History student, Hawraa Chreim, who completed a 42-hour spring 2021 internship,” Sadick says. “In addition to writing social media posts and researching labels and catalog information, Hawraa introduced me and WHM to Arwa Alkhateeb Singer, the owner of Amira Boutique in Norwood, who lent hijabs and accessories for the exhibit. Hawraa wrote the exhibit label on hijab fashion, which opens ‘The Power of Clothes’ section of the exhibit.”

The show also reflects the diversity of styles created by immigrant dressmakers that came to Worcester from many countries.  In researching that aspect of the show, the professor became an eager student. “I really enjoyed learning more about the history of Worcester’s dressmakers,” Haller says. “Many of them were and are immigrant women who used their skills, creativity, and fashion sense to bring the clothing of their home to Worcester as well as to introduce Worcester to more cosmopolitan fashions. That history of female entrepreneurship in Worcester, going back to the 1920s through today, was inspiring to uncover.”

An important point that Haller hopes visitors take away from the exhibition is that 1920 was a starting point, not an end point.  “1920 only ended voting discrimination by sex and there were still lots of other ways that women could be discriminated against,” she says. “For instance, the Swedish immigrant dressmakers in Worcester in 1920 who made some of the earliest dresses in the exhibit might not have been able to vote because Massachusetts had a literacy requirement for voting.  Jim Crow in the South meant that many Black women could not vote.  Many Native American women could not vote because they were not citizens.”

The closing image in the exhibit combines an image of suffragists celebrating 1920 with a photograph of Morgan Johnson, one of the organizers of and speakers at the Say Her Name march in June of 2020 in Worcester’s East Park, which peacefully protested the killing of Breonna Taylor by police in Louisville, Ky.  “This image, for me, represents the power of what has been achieved and the need to continue to address injustices,” Haller says.

In the above photo: Charlotte Haller, Ph.D., at the “Pretty Powerful” exhibition at Worcester Historical Museum. 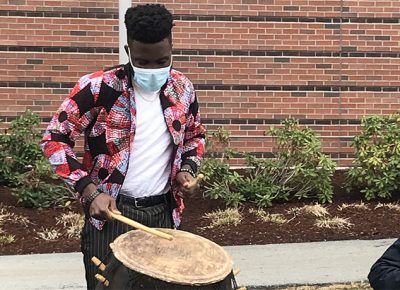 Worcester State University’s Visual and Performing Arts (VPA) Department has announced plans for a meaningful return to in-person musical performance with a variety of upcoming presentations . . .