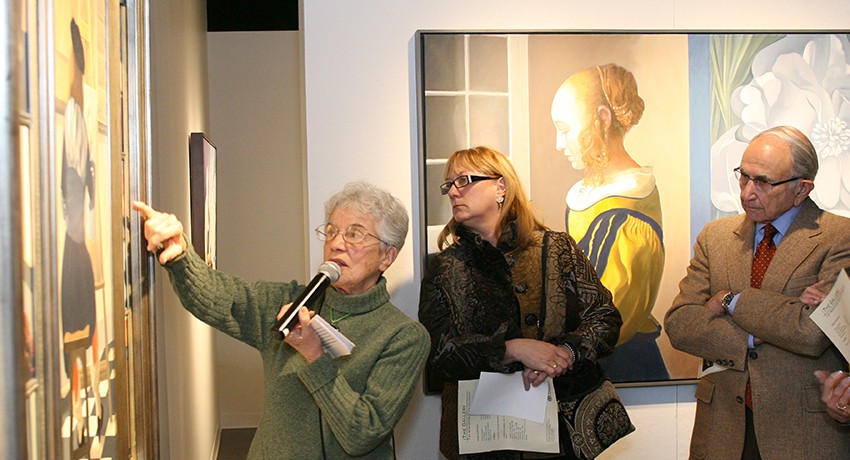 More than 70 guests signed into opening night for the “Terri Priest: Inspiration, Creation” show at The Gallery in the Ghosh Science and Technology Center, where they met special guest, the artist herself, Terri Priest.

In Worcester State’s first-ever, one-person show, Gallery Director and Visual and Performing Arts Professor Catherine Wilcox-Titus snagged Worcester native, Terri Priest. A February 3 private opening, which was also a fundraiser, resulted in additional financial support for The Gallery to improve fixtures and exhibit space. Priest is also donating 30 percent of each work sold during the show to The Gallery. The first piece sold on the first night.

“Terri Priest: Inspiration, Creation” runs through Thursday, March 14. Gallery hours are Tuesday through Friday from 11 a.m. to 5 p.m. and Saturday from 1 to 5 p.m. The Gallery is free and open to the public.

The show features Priest’s Vermeer series, which fairly pop off the wall with the clean lines and colors that so define both Vermeer and Priest. In appropriating Vermeer’s artwork into her own, Priest also appropriated the works of Georgia O’Keefe, Roy Lichtenstein and Mary Cassatt. Priest said that she combined these artists’ work with her own to tell a story and to allow viewers to determine their own narratives as they stand in front of the work.

Walking into The Gallery and stopping right inside the doors, or even peering through the windows, a panoramic landscape of Priest’s Vermeers greet the eye. Scanning from one painting to the next proves a delight of sensory perception and engulfs the viewer into the world of Terri Priest.

After smiling over the humor and humanity Priest infuses into her Vermeer pieces, guests encounter a different side of Priest’s art in her angel series. This series shows the angels as they hover on the precipice of the dark and the light. Priest created these images as she reconciled her own grief stemming from her sister’s illness and untimely death.

Priest’s career charts the history of art in the latter half of the 20th century—from abstract art to realism and as a presence in contemporary art. She ran the Fletcher Priest Gallery for contemporary art in Worcester, and she taught on the faculty of the College of the Holy Cross. Her Vermeer series garnered international attention. In prints, paintings, drawings, and collage, Priest’s work exhibits a broad range of interests and talents. This show celebrates her work and her contribution to the cultural fabric of Worcester.

WSU the Only State University Named a 'Best Value College'