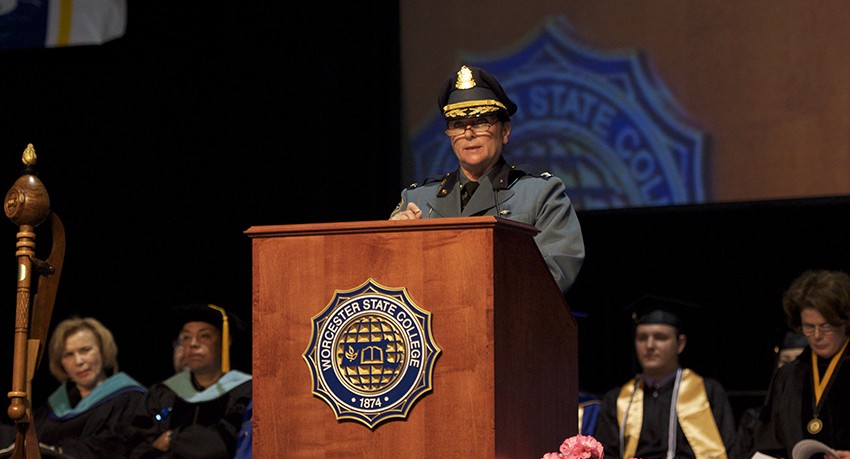 Worcester State Grads Urged to Look Forward—and Back at 2010

Colonel Marian J. McGovern, the first woman to lead the Massachusetts State Police, told Worcester State College class of 2010 to remember their history as they look to their future.  “There are so many more sentences in the book of your life,” said McGovern, “but remember the struggles that you have endured.  That is what truly builds character.”  She used Founder and second president John Adams as an example of character and fortitude and reminded grads that Adams got his start in Worcester, working as a teacher in his early career.  McGovern also urged the graduates to continue their education and “be part of the cycle of learning in true Lancer style.”

McGovern was also presented with an honorary Doctoral Degree as part of the 134th commencement exercise held Sunday at the DCU Center.

Colonel McGovern’s three-decade career with the State Police began as a road trooper in 1979. She later served as a detective and then as commander of the Worcester County State Police Detective Unit. As a major, she was assigned to the crime lab, where she helped develop the unit that enters evidence into the Combined DNA Index System, a national database that seeks to match DNA collected from crime scenes to profiles of known offenders. Additionally, Colonel McGovern oversaw the implementation in Massachusetts of the AMBER Alert Program, a tool that has proven successful in finding abducted children. As a lieutenant colonel, she served as commander of the Division of Standards and Training, which oversees internal investigations and the State Police Academy. She was appointed Deputy Superintendent, the department’s second-in-command, in January 2009.

Worcester State College Board of Trustees Chair John Brissette honored a student from the class of 2010 who was tragically killed in a car accident on Christmas Eve.  A single white rose was placed on an empty chair for Vanessa A. Dunn of Millbury and her family was presented with a certificate of achievement prior to the ceremony.

Congressman James McGovern told graduates, “you have received a wonderful gift—a great education.  Go out and make the world a better place.”  State Senator Harriett Chandler agreed saying, “you have had a world class education and we look forward to wonderful things from you in your future.”

WSC 2010 Class president Mark F. Gawlak told grads to be flexible when planning for the future.  “Plans change,” he said.  “You’ll hit a point where the plan is not working.  When that happens, re-start, find a new plan and start over.”  Gawlak began his college career at UMASS and finished at Worcester State College. He now plans on attending law school.

Dr. Mary S. Fowler (Mathematics) and Dr. Eihab Jaber (Chemistry) were honored with the 2010 George I. Alden Excellence in Teaching Award as part of commencement exercises.

Albana Xhemollari was awarded the Ella M. Whitney Prize in recognition of excellence in scholarship, professional skill and personal development.