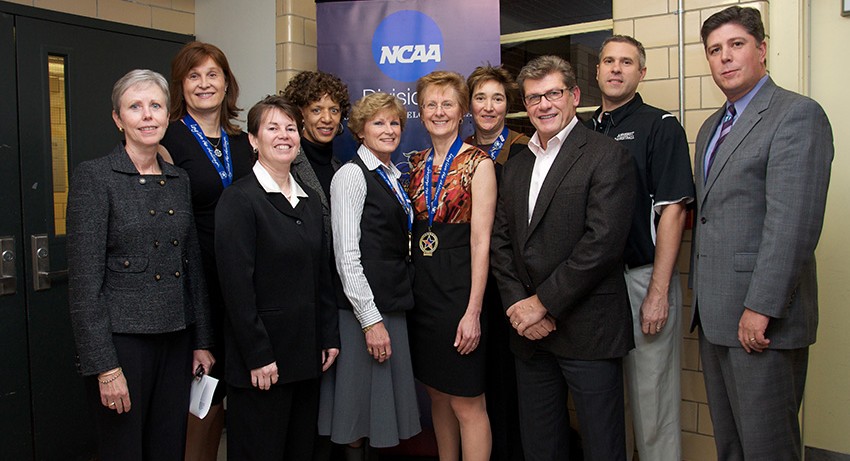 If anything can be said, everyone took away something last night from the “Evening of Excellence” program that was held at Worcester State University’s Sullivan Auditorium on Tuesday, October 25.

The evening was headlined by three influential members in the world of women’s basketball: University of Connecticut head coach Geno Auriemma, Bentley head coach Barbara Stevens and Amherst head coach G.P. Gromacki, who all touched on the subjects of motivation, leadership and success.

Auriemma is a four-time Division I National Champion and head coach of the University of Connecticut women’s basketball team. Stevens, who has 800 wins to her credit, been inducted into the Women’s Basketball Hall of Fame and is the head coach of Bentley University and Gromacki is a four-time D3hoops.com All-Northeast Regional Coach of the Year who helped guide the Amherst women’s basketball team to their first-ever Division III National Championship this past season.

Approximately 400 students, coaches, and members of the Worcester community attended the program which was sponsored by the Worcester State University Athletics and Alumni Departments and the Eastern College Athletic Conference (ECAC).

The panel was moderated by Worcester State women’s basketball head coach, Karen Tessmer, who asked questions to the participants on stage. Leading off the discussion was a question about who of each their greatest influences were and ironically all three said that their parents.

Stevens mentioned that her mother and father were extremely supportive in an era of women’s basketball where there was not a lot of participation in girls’ sports when she grew up.

“It was my parents who encouraged my love of sports, who drove me to every game and practice,” said Stevens. “When I went to Bridgewater State, I continued to play and go to coaching clinics. I always loved the coaching aspect.”

When the conversation moved to motivation, Gromacki said that it was the little things that he has tried to instill into his team in its run to the national championship.

“It’s always great when your players come down to the office in the preseason to ask questions,” said Gromacki. “You try to keep them motivated, learning new things, new tactics, drills, and plays. It’s the little things that help make them a better team.”

One of the topics that Auriemma brought up during the subject of motivation is how more young women playing the sport of basketball need to not only enjoy playing it, they need to love playing the sport as well.

“Going to the gym and working out is just a guy thing,” said Auriemma. “But you should try to use working out in the gym as source of motivation for being a great player. It’s like anyone who plays an instrument. It’s not like they pick it up once and then they don’t play it again, they practice all the time. All of the great players out there work on their game all the time. And they love playing the sport too.”

The trio each had different takes on leadership and recruiting.

In Auriemma’s position you try to recruit the best players and the most talented athletes. But he said that when he watched games, he wanted to see how unselfish a prospective athlete is and how they react to certain things during the game.

“How does the player pass the ball to her teammates? How do they react when they are taken out of the game? Do they cheer for their teammates on the sidelines or do they sit on the side uninterested? How are they in the face of adversity?

“You want to make sure they are going to be interested in being on a great team for all four years. You don’t worry about as much as the make-up as you do in trying to recruit someone who’s going to be a great teammate.”

Gromacki said that one of his challenges at Amherst is with limited resources, he can’t go out and check on prospective student-athletes on the other side of the country. He relies heavily on game tape and face-to-face meetings to find the future leaders of his team.

“It’s hard, until you get the player in a face-to-face meeting, its tough to figure out whether someone is going to take that role out of the three or four players that you bring in.”

When looking for team captains, Stevens said that typically those players are the ones who have the strongest backbones.

“Those are the players that are willing to stand out and do what’s right,” said Stevens. “Those players are your best communicators and the ones who take care of the locker room.”

Stevens also said that the seniors on your team are the ones who are the keepers of the flame.

“Your seniors are the ones who are going to support your program, its traditions and what you’re trying to do,” said Stevens. “It has to be the seniors who are going to reinforce, encourage and keep the standards that demand excellence.”

Tessmer asked all three panelists what they thought their top three standards or demands that they asked of the players on their teams.

Auriemma said that he wanted his players to play hard, play smart and have fun.

“All the other stuff just comes if you keep those three things in mind,” said Auriemma.

The other thing that Auriemma mentioned was that you want to spend time enjoying everyone’s company off the basketball court.

“One big mistake that young coaches today make too often is they try to get the players to like them, “ said Auriemma. “It’s the connection off the court that ties the team together.

“Most of the time players aren’t going to remember the final score of this or that game, it’s the plane ride somewhere or something else that we did that they remember.”

Stevens echoed the same sentiment and said that her former players just don’t forget the time that they spent at Bentley.

“I try to make sure that you’re a better person from the time you arrive, to the time you leave,” said Stevens. “Even if it was the littlest thing, it was what they needed in that moment, it stays with them. You don’t realize it, but we can impact their lives.”

The final question for the panel was asked was about the secret to their success. Gromacki was pretty straight forward with his response.

Auriemma closed the roundtable dialogue with a final thought. He said that during the year, he tries to take his players to Broadway shows and there is a reason behind it.

“On Broadway, that is where the best of the best perform and you have to be at your best, every single time you’re up on stage, day after day after day,” said Auriemma. “You have to aspire to be great the way you’re supposed to do it, not like someone who has the potential to be great and never live up to it.

“That’s the same mindset. I tell my players to appreciate it and try to be like that on the court. “

After the discussion was over, Bridgett Casey, head coach of the Bridgewater State University women’s basketball team, said that she was enthralled to be in the presence of three extremely successful basketball coaches. Casey brought her squad up from Bridgewater, to attend the event.

“I’m going to be taking back bits and pieces to my own team, like keeping the pre-game (routine) simple,” said Casey. “Stevens had said, ‘You can get to each player, just try to make a difference’ and that is something that I believe in. You try to instill that into your own players.”

Worcester State women’s basketball guard and senior tri-captain Kaleigh Charette said that she was captivated by what each had to say about the differences between being a captain, a senior and a leader.

“Each had something to say about what they wanted out of a captain,” said Charette. “It’s not something that you earn just by being a senior, by how much time you’ve put in or anything like that; it’s about working hard for that position and it’s the way that your team looks up to you as a leader and a captain.”

Andrea Belis, head coach of the Becker women’s volleyball team, also took the night off to enjoy the evening with a few of her colleagues from the Hawks athletics department. Belis, said that a lot of the themes that all three touched upon were universal to all sports.

“It wasn’t just about basketball,” said Belis. “It was about coaching personalities and athletes. There is a lot that I’m bringing back to my own volleyball team.”

The five members of the Mass Miracles, a team of 50-plus seniors who had captured a Three-On-Three Gold Medal at the National Senior Games this past summer, were recognized by Tessmer before the event started. The group included Worcester State alum Barbara Cherecwich ’79, Kris Kabin, Megan Ladd, Tina Quick and June Walton.

Tessmer thought the event was a great success.

“For anyone who loves the sport of women’s basketball, this was a terrific evening,” said Tessmer. “The audience was really treated to different perspectives, but a lot of the same issues that are in all three divisions.”

“It really reminds you how much you enjoy your job coaching, how invigorating and inspiring coaching can be and how many great people are in this profession.” 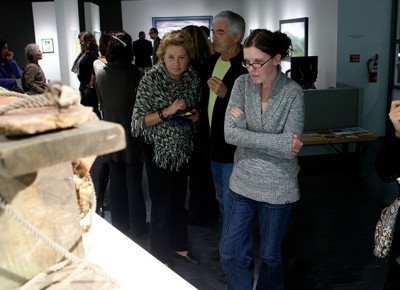 Students, faculty, staff, alumni and donors attended receptions for the first juried show in the renovated Gallery at WSU last week. Titled "The Global Perspective: Understanding the Past, Looking to . . .