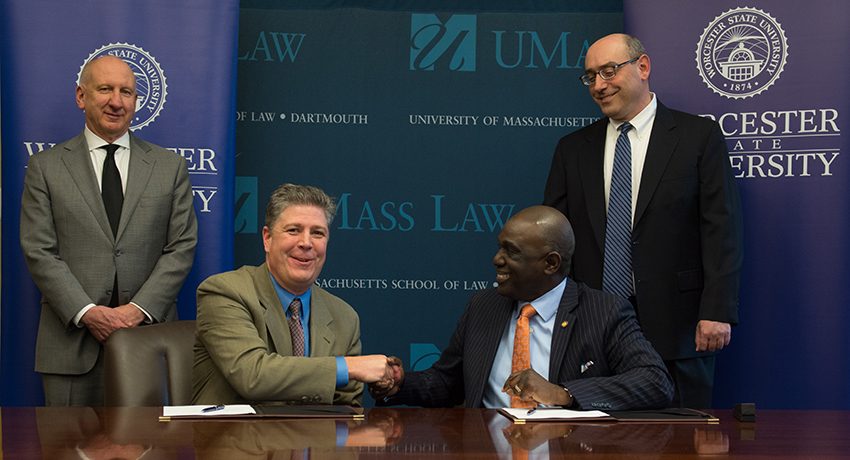 Chancellor Johnson, formerly president of Becker College in Worcester, traveled to Worcester State for the signing.

“We are pleased to welcome Worcester State University as a partner in our mission to provide a private law school experience and a public university value for students who want to pursue justice as a career,” Chancellor Johnson said. “Our law students have provided more than 100,000 hours of pro bono legal services in their communities since UMass Law was established in 2010, and I am excited to see how WSU students engage in this mission.”

“Worcester State University is committed to providing access to high quality educational opportunities for students from all backgrounds,” said President Maloney. “The 3+3 law school program is one of several creative partnerships Worcester State University has established to help reduce the cost of higher education, so more students can afford to pursue their dreams.”

The credits earned in that first year of law school would fulfill the remaining undergraduate degree requirements, so that upon its successful completion, the student would earn a bachelor’s degree from Worcester State University. Upon completion of all six years of the program, the student would also earn a UMass Law diploma.

The program is designed for students who have a strong desire to pursue a legal career when they begin at Worcester State and whose career goals can be well- served by UMass Law. A recent report by the American Bar Association indicated that UMass Law, less than two years after earning full national accreditation, outperformed four area private law schools and ranks second in the nation in percentage of graduates who enter public service employment.

“As the only public law school in Massachusetts, we have a unique opportunity and obligation to serve the public interest,” said Dean Mitnick. “I welcome Worcester State students and look forward to watching them pursue and attain their goals.”

“Public universities in Massachusetts work together to benefit students and the good of the commonwealth,” said Worcester State University Dean of Humanities and Social Sciences Russ Pottle. “The partnership with UMass Law opens any number of possibilities, including public interest law. Students interested in public interest law, like immigration or human rights law, for instance, or law for community economic development, can find compelling educational paths through Worcester State to UMass Law.”

The Commonwealth Commitment, whereby students begin their degree program at a Massachusetts community college full-time, earning an associate’s and bachelor’s degree in four years, with guaranteed transfer of credits, at a price point less than it would cost to enter directly into a state university. Students who persist full time, completing their bachelor’s program in four years, also would receive 10 percent off the total cost. Commonwealth Commitment applies to many majors, but not all.

The 3+1 RN-to-BS Nursing program with Quinsigamond Community College, whereby students complete the first three years of coursework at QCC and finish up the fourth year at Worcester State, earning a WSU bachelor’s degree in mursing.

Students gathered in the Student Center to create 300 Matter Boxes that were sent to areas in Worcester with food security concerns, including the South High Food Pantry, the Grace Hotel, the Chandler Magnet Food Pantry, and The Mustard Seed. Each Matter Box included a box of Cheerios and other food supplies that will provide a child with a nutritious breakfast. The effort was part of the One . . .