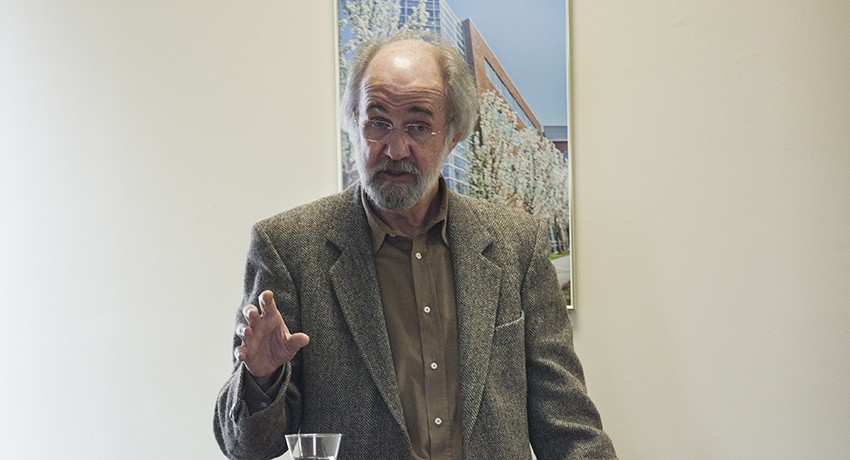 Members of Worcester State University’s chapter of Amnesty International and Third World Alliance as well as global studies, history, languages and literature students learned the sordid details of Argentina’s “Dirty War” during a lecture on Monday, March 4 in the Fallon Room of the Student Center.

Paul W. Posner, Ph.D., associate professor of political science at Clark University, covered the history of before, during and after the war while WSU Professor of World Languages Juan Orbe, Ph.D., gave a personal account of living in Argentina at the start of the “Dirty War.”

Its seeds were planted in the 1950s during the regime of Juan Perone, and were rooted in the Cold War struggle between the United States and the Union of Soviet Socialist Republics, according to Posner.

Tens of thousands of people were tortured and 10,000 to 30,000 people are believed to have disappeared in state-sponsored terror campaigns. The military aimed to subdue the radical labor movement of Argentina and later attacked Jews, homosexuals, “anyone who opposed their ideological view,” he said. There was a coordinated effort to take babies from women who were held as enemies of the state and to give them to military families. This happened to an estimated 400 to 500 children.

It wasn’t until the Argentine military failed to take the Falkland Islands in 1982 that the “Dirty War” started to come to an end, Posner said. The public couldn’t tolerate the military’s failure on top of the human rights abuses and economic problems.

Since then, there has been “steady progress” to protect human rights in Argentina and to bring those who committed atrocities to justice, he said. “Just last year, General Jorge Rafael Videla was convicted of hatching the plan to take the babies of mothers who were held by the military.”

“This is a case of relative success in adjudicating social justice,” Posner said.

Orbe began by telling the audience that nothing like this has happened in the United States since its Civil War. Being a university student in Buenos Aires, he found himself in the midst of the protesters.

“Imagine being 26 in 1972-73 and all your friends, all the people in this room would have guns,” he said. “The conclusion we arrived at was if you want democracy without extreme ends, you needed to take action. I wasn’t involved in the armed part of the struggle, but some of my friends were.”

“Nobody wants to talk but everybody knows what’s going on,” he added. “You imagine this going on everywhere. Half of my family was very happy with the military even though they picked on the Jews and we are half Jewish. Things really got complicated.”

“Half of the country was saying, ‘Let’s get rid of the commies,’ while the other half was thinking, ‘This is the end,’” Orbe recalled.

He went from realizing people in his class suddenly disappeared to wondering when he would be picked up.

At one point, a beautiful young woman from America, Canada or Britain, who said she was with Amnesty International, paid the protesters a visit. Meanwhile, Orbe said, he heard about American government operatives teaching Argentines torture techniques.

Shortly before Orbe was given a scholarship to a graduate school in the United States, the military began mass killings and dumping 20 to 50 corpses at a time. “We realized the corpses were found on Friday,” he said. “Everyone in the country would be talking on Saturday…Can you believe there was a master brain behind this…?”

Orbe said he was happy to get the scholarship, “but also very guilty” because of what might happen to friends who stayed in Argentina.

Orbe and his wife returned to Argentina in 1980 for a teaching assignment. They were with a group of people when they heard the news that an Argentine, Adolfo Pérez Esquivel, had just won the Nobel Peace Prize. “There was this silence in the room” rather than jubilation, he recalled. “That was when we decided that we weren’t going to stay in Argentina.”

The lecture was co-sponsored by Amnesty International, Global Studies, the History Department, the English/World Languages Department, Third World Alliance, and the Office of Multicultural Affairs.