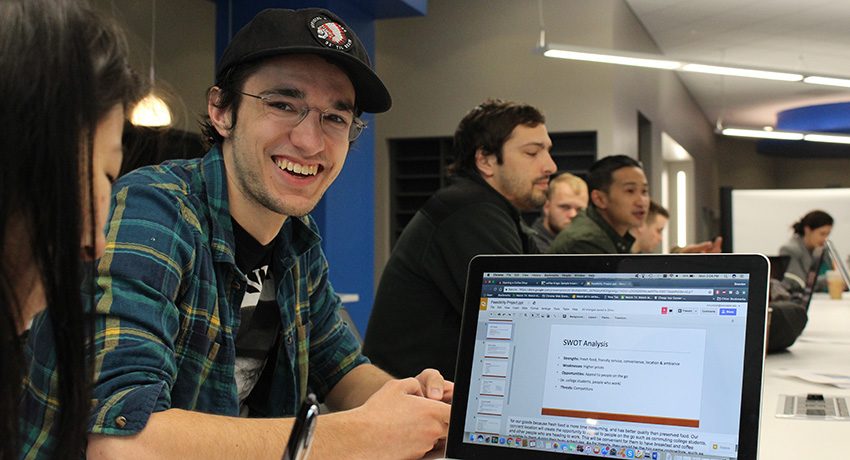 Senior Daniel Lucey, though still a student at Worcester State University, is ready to launch his own business any day now. Julia Ward, a WSU junior, still hasn’t figured out what she wants to do. Both, however, say Adjunct Professor Amy Mosher Berry’s Introduction to Entrepreneurship class has helped them plan for a more creative future.

The class, which just wrapped for the semester on May 1, was held off campus at The Worcester Idea Lab at 20 Franklin St. in downtown Worcester. It was the first time such a class was held at The Idea Lab, where WSU is a dues-paying partner as part of the school’s commitment to helping with downtown’s ongoing revival. The class helps students develop feasibility blueprints for their business ideas. The blueprints are not detailed business plans but the step before that, helping students get a general sense of whether a concept is workable or not.

“Think of it as the next step up from the napkin drawing,” Berry says.

Lucey has a clothing business ready to go. He’s just waiting for the t-shirts he’s already ordered to come in. He plans to work with a local screen printer to adapt his own designs onto clothes he will then market to young people who want an edgier look in fashion.

Berry’s class “gave me the reassurance that it is possible to start your own business,” Lucey said. He said he gained confidence and learned a lot from the local business leaders who had been invited to speak to the class throughout the term.

“Just seeing and learning about the local businesses, I figured I’ll give it a shot,” he said. “It kind of gave me that extra little push.”

Ward, a communication major who minors in business, is still thinking about which entrepreneurship angle she might explore in the future.

“I have no idea what I want to do at the moment,” she said. “If I were to run my own business, it would be a nonprofit like a Boys and Girls Club, something sustainable and very involved with volunteering and community. I’m all about that stuff.”

When an idea does crystalize for her, Ward said she can turn to a long list of contacts that Berry gave her. “That’s an amazing help, especially as a college kid finding your way,” she said.

This course encourages students to “think big” as they engage in real-life discussions and activities related to launching, growing, and managing various types of business ventures, Berry says in her course description. Student are asked to identify key concepts, components, and characteristics needed to start and run a business, develop and evaluate business ideas, conduct industry and market feasibility analyses, and estimate costs among other factors.

At the May 1 session, the class of 19 students, working in five teams, presented feasibility studies for their projects. The concepts were: an advanced training center for security guards, a coffee shop, a day care center, online clothing store, and drone-based real estate. The plans were critiqued by a panel of professionals including Kyla Pacheco, who heads the nonprofit Action Worcester!, which operates The Idea Lab; Peter Dunn, business programs manager for the Worcester Executive Office of Economic Development; Karen Pelletier, director of higher education and business partnerships for the Worcester Regional Chamber of Commerce; and Karen McGinnis, a budding entrepreneur (who, it was announced at the close of class, happens to be Berry’s mother).

The students’ drone idea was the most technology-focused concept among the presentations. It was designed to help real estate agents get a leg up on their competition, which can be very stiff. Instead of just taking a couple shots of a property with a cell phone and posting them online, the students suggested creating a video virtual tour by having a drone to fly over the building, around the grounds and even through all the rooms.

“Drones can highlight property details, especially outside like pools and landscaping,” WSU junior Ahmed Abdeljaber said at the opening of his team’s presentation. “It also shows the property in relation to surrounding neighbors, schools, parks, and any bodies of water.”

One of the biggest drawbacks to the idea, the students said, was potential competition. Pretty much anyone with about $2,500 to invest in a drone can start a similar business. Another future competitor might be virtual reality, an extremely fast-growing sector that could someday have prospective home buyers donning special eyewear to enable them to feel as if they are actually walking through the property. Overall, however, the students deemed the project a feasible one.

Abdeljaber, who plans to go into real estate after he graduates, said the drone idea wasn’t something that had occurred to him until he took the class and started talking with other members of his team. Now, he said, the high-tech approach is something he would definitely consider.

Holding the class in the Idea Lab encourages students to embrace that kind of forward-looking entrepreneurship, Berry said. The Lab is a 3,200-square-foot space that encourages collaboration and networking among a variety of groups and individuals. It’s a great setting for students looking to develop entrepreneurship skills, she said.

“They’re stretching outside their comfort zone and they’re also seeing what’s possible in the city of Worcester—so maybe they will see themselves as having some sort of a viable future here,” she said. “It’s really exciting because they can see that they don’t necessarily have to go to some other city to have a great life and career path. It can actually happen here, and that’s a new mindset that we need to foster for it to become more of a reality, but I think we’re getting there.”

Entrepreneurship also was the focus of the inaugural WSU and Digital Federal Credit Union (DCU) Innovation Contest held recently by WSU’s new Center for Entrepreneurship. Four teams pitched five new venture ideas to judges from DCU and WSU. Thirteen of the 19 students in Berry’s class participated, and three WSU teams made the final round. Each member of the winning team received $500, and every student who presented during the contest received $100.

The winning idea was Mark Murray and Minsang Phan’s “Payback Loan Program.” Their idea addresses one of the difficult problems that DCU is trying to solve: How to get people to use a credit union instead of expensive non-bank services like payday loans and check-cashing services.

Other ideas were a program to encourage businesses to recycle instead of throwing away recyclables; video banking; a financial literacy program aimed at people aged 18 to 25; and a program for DCU to partner with businesses to reduce the number of unbanked people.

Among several other WSU people involved were Berry, who helped prepare the students, Professor of Business Administration and Economics Rodney Oudan, D.B.A., who served as a judge, and Assistant Professor of English Christina Santana, Ph.D., who teaches business writing and communication. Santana coached all the groups on the “rocket pitch” that they used during their presentations.

About the Photo: Worcester State University student Brenden Murdock in Introduction to Entrepreneurship class at the Idea Lab 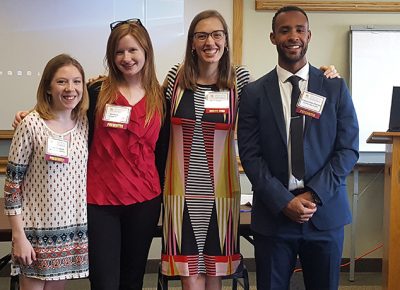 In its 23rd year, the Massachusetts Statewide Undergraduate Research Conference at University of Massachusetts Amherst featured the first-ever student presentations in a foreign language. Worcester . . .