In a remote Irish pub, where the men gather on evenings to fend off the loneliness of their rural lives, a former local who has moved to the nearby big town, brings a young woman from Dublin to whom he has just sold a house.  The men start telling ghost stories, trying to impress the woman.  What seems like a standard evening takes an unexpected turn when she tells a tale of her own that goes further than the men could have imagined.

For the first time at Worcester State, designers for “The Weir” are three current students and one recent graduate.  The new Interdisciplinary Visual & Performing Arts major and the renovated Fuller Theater have reinvigorated the Theatre program, allowing faculty to provide new opportunities for theatre students.  David Higginbottom is the scenic designer, Gosia Malkowska (VPA ’11) is costume designer, Robby Dookhran is lighting designer, and Caitlyn MacKenna is sound designer.  The designers have worked closely with director and professor, Adam Zahler, to create a production that evokes the feel of McPherson’s script and the world of northwest Ireland.

The cast, also all students, John Karwaski (Jack), Michael Sparks (Brendan), Joe Aliberti (Jim), Devin Malko (Finbar), and Trang Le (Valerie) are immersed in the life and culture of the northwest coast of Ireland where the play is set.  Study of the people, the land, and the language are part of the rehearsal process.  Additionally, the actors are studying dialects specific to the characters.  Worcester State Theatre has engaged Liz Hayes, professor of speech at Boston Conservatory and professional actress, to work on the dialects. 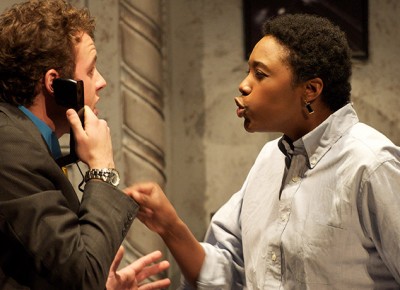