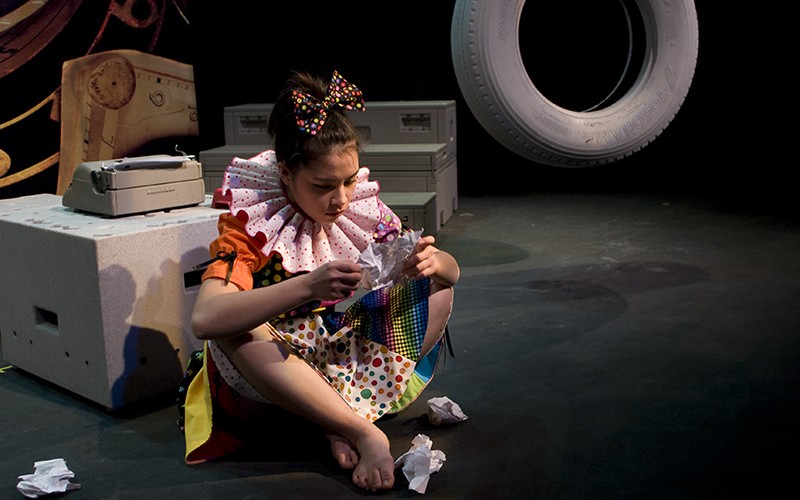 All In The Timing, we get to see the world through the eyes of playwright David Ives.  It’s a mixed-up, profound, and very, very funny world where chimps try to write Hamlet, Philadelphia is a metaphysical state of being, and we get a “do over” for every mistake made while dating.  Worcester State Theatre will produce Ives’ sparkling evening of six one-act plays, All In The Timing at Worcester State College for four performances in April.

All In The Timing will be presented by Worcester State Theatre Up Close and the Department of Visual and Performing Arts April 10, 11, and 12 at 8 p.m., and April 13 at 2 p.m. in Sullivan Auditorium at 486 Chandler St. in Worcester.  Tickets are $6.00 for students and $12.00 general admission, and will be available at the Student Center Information Desk and at the door.

The six plays in All In The Timing, have won wide acclaim for their wit, intelligence, and humor.  At their core, each play examines how we communicate…or don’t, as the case may be.

Sure Thing: Two people meet in a cafe and find their way through a conversational minefield as an off-stage bell interrupts their false starts, gaffes, and faux-pas on the way to falling in love.

The Universal Language brings together Dawn, a young woman with a stutter, and Don, the creator and teacher of Unamunda, a wild comic language. Their lesson sends them off into a dazzling display of hysterical verbal pyrotechnics-and, of course, true love.

Words, Words, Words recalls the philosophical adage that three monkeys typing into infinity will sooner or later produce Hamlet and asks: what would monkeys talk about at their typewriters?

The Philadelphia presents a young man in a restaurant who has fallen into “a Philadelphia,” a Twilight-Zone-like state in which he cannot get anything he asks for. His only way out of the dilemma? To ask for the opposite of what he wants.

Philip Glass Buys a Loaf of Bread is a parodic vignette in trademark Glassian style, with the celebrated composer having a moment of existential crisis in a bakery.

Variations on the Death of Trotsky shows us the Russian revolutionary on the day of his demise, desperately trying to cope with the mountain-climber’s axe he’s discovered in his head.

All In The Timing, will be performed in Sullivan Auditorium, the temporary home of Worcester State Theatre while the Administration building is undergoing renovations.

Below are the plays with casts.  All actors are students

Variations On The Death Of Trotsky

The Worcester State Student Government Association (SGA) met, and will likely exceed, their goal of $21,500 as donations continue to come in.  The 17thannual Auction to Benefit the Homeless was . . .