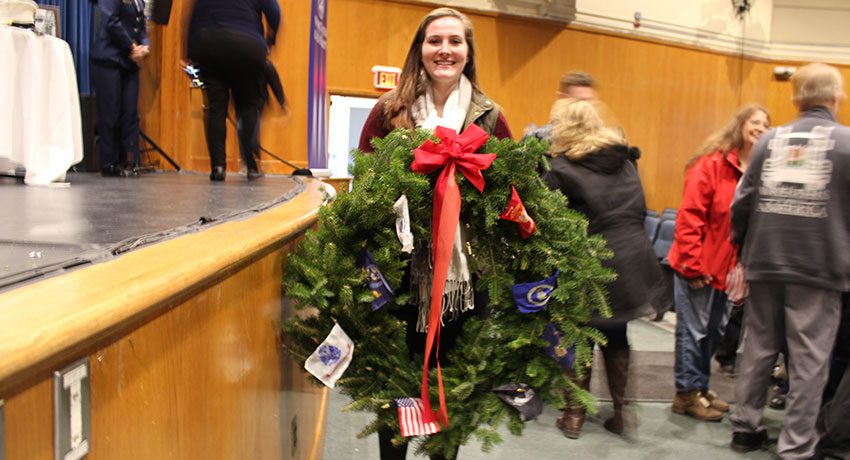 That’s the motto of Wreaths Across America, a patriotic non-profit organization that aims to place a wreath on every veteran’s grave across the country. Amid blaring horns and the flashing blue lights of a police motorcycle escort, the group’s impressive convoy of 11 tractor-trailers and accompanying fleet of support vehicles arrived Worcester State University on Tuesday, Dec. 11, for a moving ceremony that included the presentation of wreaths to local veterans’ organizations and others.

The group was on its way to make its annual visit to Arlington National Cemetery in Washington, D.C., to lay wreaths on veterans’ graves there on Saturday, Dec. 15. The goal was to place 243,000 wreaths in 2.5 hours. Last year, about 90,000 volunteers helped with that task and about as many were expected to show up again this year.

“People care when they find out about this,” Karen Worcester, the executive director of Wreaths Across America, said. “It’s become a family tradition for a lot of people to be involved in the wreath-laying process.”

“With 90,000 people, there were some from the left and some from the right,” she said, speaking of last year’s Arlington event. “There were Christians and atheists and all walks but they all could come with their families. They could all go out together, and these parents can teach their children, in whatever way they wanted to, about the sacrifices that were made and some of the civics that kids don’t necessarily get in the school system today.”

Worcester State was one of several stops the group planned to make on its trek to Washington from its headquarters in Maine. During the ceremony here, WSU student Renae Voyer, a Navy veteran, accepted a wreath on behalf of Worcester State Veterans Services. Gold Star mother Dolly Sullivan of Worcester spoke of the need for remembrance and respect for the sacrifices that not only members of the military make but their families as well. Her son, Capt. Christopher Sullivan, made the ultimate sacrifice when he died in service to our country in Baghdad in 2005, the victim of an IED, or improvised explosive device.

A highlight of the ceremony was a stirring performance by the International Veterans Chorus, which is based in Leominster and includes members age 59 to 95. After the brief concert, Worcester talked about the need to teach the younger generation to understand and respect the immense contribution veterans and their families have made so that we can live in a society where all are free, regardless race, creed, national origin or political leanings.

Wreaths Across America’s focus has been on cemeteries throughout the United States. But earlier this holiday season, the group extended its patriotic reach to the American cemetery in Normandy, laying wreaths to memorialize the thousands of Americans who died there during World War II.

One of those veterans was Private First Class Lawrence V. Colson, who came from the same county in Maine that Worcester hails from.  His grave, according to military records, is Plot H, Row 10, Grave 24, Normandy American Cemetery, Colleville-sur-Mer, France. Colson was buried there after he was killed on July 11, 1944, during the allied invasion of France. He was single and left no dependents. Even 74 years later, Wreaths Across America wants to ensure that he is not forgotten.

Worcester, whose family grew with the addition of a grandchild just a few weeks ago, said, as tears started to well up in her eyes, that she could just imagine the pain of mothers, like Private Colson’s, who would never have a grandchild through their service-member son or daughter who had been killed in action.

Wreaths Across America intends to someday lay wreaths at holiday time on the graves of all those who have served in uniform, a goal the becomes more reachable as the organization continues to grow. After the 11 tractor-trailers left Worcester State, the convoy was scheduled to meet up with 65 additional trucks at pre-staged locations along the route, then all were to converge on the national cemetery.

Across the country, more than 600 wreath-bearing trucks have been mobilized to participate in ceremonies in 1,640 locations. About 90 percent of them are volunteer trucking companies and drivers.

“Arlington gets most of the attention but it’s just one of the ceremonies we do,” Worcester said. “Some of our ceremonies have 25,000 to 30,000 people, others have 200, but wherever veteran is laid to rest, that’s where we’ll go.” 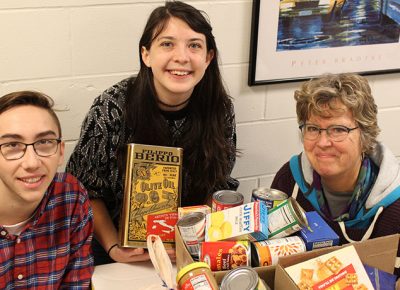 Brooke Maxfield knows what it’s like to be homeless and hungry. The 23-year-old Worcester State senior has a great relationship with her parents now, but three weeks after she turned 18, they . . .