Colonel Marian J. McGovern, the first woman to lead the Massachusetts State Police, will deliver the Commencement Address for Worcester State College Sunday, May 16, 2010 at 1:00 p.m. at the DCU Center.

“Colonel McGovern is an outstanding leader and I am sure her message will resonate with our graduates,” said Worcester State College President Janelle Ashley, “We are very proud that she will be delivering our commencement address.”

Colonel McGovern’s three-decade career with the State Police began as a road trooper in 1979. She later served as a detective and then as commander of the Worcester County State Police Detective Unit. As a major, she was assigned to the crime lab, where she helped develop the unit that enters evidence into the Combined DNA Index System, a national database that seeks to match DNA collected from crime scenes to profiles of known offenders.

Additionally, Colonel McGovern oversaw the implementation in Massachusetts of the AMBER Alert Program, a tool that has proven successful in finding abducted children. As a lieutenant colonel, she served as commander of the Division of Standards and Training, which oversees internal investigations and the State Police Academy. She was appointed Deputy Superintendent, the department’s second-in-command, in January 2009.

Colonel McGovern holds a Bachelor of Arts degree in criminal justice from Framingham State College and a Master of Science degree in criminal justice from Westfield State College. She is a past recipient of the Breaking the Glass Ceiling Award by the National Center for Women and Policing and the Distinguished Law Enforcement Award from Blue Mass, Diocese of Worcester. She was raised in Worcester, where she attended local public schools and Holy Name High School.

The Massachusetts State Police department was created in 1865, making it the oldest statewide law enforcement agency in the nation. 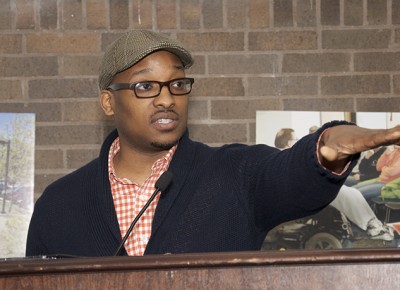 Director Says Documentary Is a Story of African American Resolve

David A. Wilson, writer and co-director of the documentary “Meeting David Wilson,” said he worked on this project not only to tell a story about America’s post-slavery history, but also to show . . .