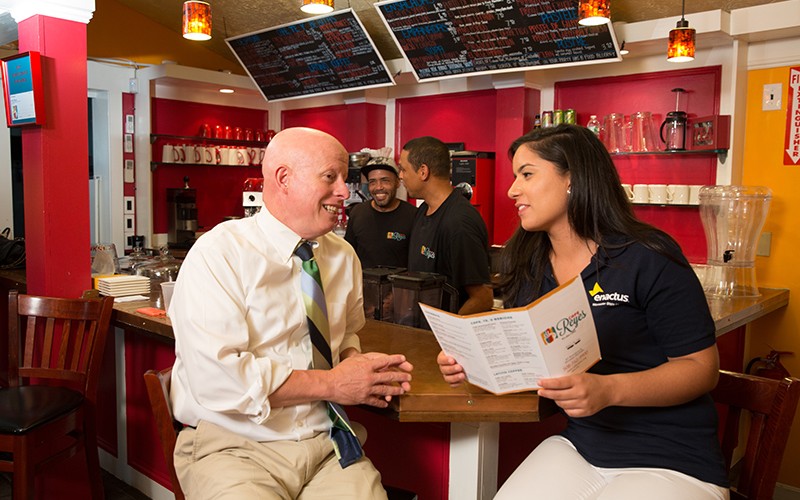 Viewed from the outside, the two groups seem like unlikely partners: A Worcester State University community of respected faculty and staff, successful alumni, and ambitious students, and another community of Latino men teetering on the fringe of society, trying to recover from the disease of addiction that has exposed them to desperate days, with the simple goals of re-entering society and reuniting with their families.

However unlikely the pairing, the two groups have bonded deeply over the past year as a matrix of WSU community service groups and individuals have adopted the men of Latin American Health Alliance Hector Reyes House, a substance abuse recovery facility in Worcester.  One group is eager to teach, and the other is eager to learn—although exactly who is teaching and who is learning is sometimes not that straightforward.

Students are putting a human face to the statistics they learn in the classroom.  A coalition of alumni, staff, faculty, and students are empowering residents with basic life skills, creating and presenting lessons on how to find a job, the importance of financial literacy, and how to reduce stress to keep them on the road to success. And most importantly, they’re making a human connection with a population in need, one that many others would like to forget.

“Everyone involved sees this as impactful community service,” says Mark Wagner, Ph.D., director of the John J. Binienda Center for Civic Engagement. “There’s a real sense of camaraderie among clients, students, and faculty. We are not doing for, we are doing with.”

Matilde Castiel, M.D., the new commissioner of health and human services for the city of Worcester (formerly the clinical associate professor of medicine at UMass Medical School and the recent director of Reyes House), is passionate and committed to this population. She’s also not shy about asking for help, and, as a result, works with other community service groups and individuals in the city. But she says the number of WSU community members involved with Reyes House and the variety of projects makes the Worcester State connection unique.

“The fact that they care and are interested in the guys, that enthusiasm they show—no one else who comes here does that,” says Dr. Castiel. “The people in our clients’ support system are other people in recovery and counselors. They aren’t around regular, average people like the students and others from Worcester State, and they inspire them.”

Reyes House was founded in 2009 by Hector E. Reyes, a Worcester community activist, and is the only facility for Latino men in Central Massachusetts. Clients enter the program voluntarily, some coming directly from jail, others from referrals. Forty percent graduate successfully in six to 12 months, while others drop out, relapse, or go through the program multiple times before achieving success. Some transition to Casa Reyes, a sober house for graduates of the program that provides less structure and more responsibility.

Statistics indicate that targeting Hispanic males in Worcester goes to the heart of the city’s substance abuse problems. According to a Massachusetts Department of Public Health Bureau of Substance Abuse Services 2014 report, 24 percent of people admitted to substance abuse facilities in Worcester were Hispanic (versus 11 percent statewide), 72 percent were male, and 87 percent were unemployed.

The roots of the partnership were planted 18 months ago with a chance encounter between Michael Mills ’72 and Castiel at a Worcester Economics Club dinner. The two chatted about what they did for a living, and Mills was immediately drawn to Castiel’s passion for helping this challenging population break out of the cycle of substance abuse.

Mills, a business coach who is also chair of the WSU Alumni Association Advisory Board, admits to having very little experience interacting with such a vulnerable population.

“I’ve led a very vanilla life. Growing up, we weren’t wealthy, but we got everything we needed and most of the things that we wanted,” says Mills, who volunteers once a week to help the men navigate the job search process and business issues such as goals and budgets. “Most of these clients didn’t have those same opportunities. I had the misconception that these people can’t be helped. What I’ve learned is that they are very interested and focused on turning their lives around.”

He brought the Reyes House story to Wagner, who invited Castiel to one of his monthly Community Service Committee breakfasts. Also in the meeting was Joan “Jay” Mahoney, Ph.D., professor of business administration and economics and advisor to WSU’s representatives to Enactus, an international community service organization for students. Mahoney is always on the lookout for potential community service projects to bring to the members, who then vote on which projects the group will tackle and present at the annual national Enactus contest. No project gets green lit unless at least one student champions it as the project leader.

The Enactus students immediately embraced the idea of helping the men of Reyes House, and began meeting with Castiel to figure out where they could help the most. They discovered that because of their history, the men lacked many life skills the students take for granted, such as how to open a bank account, or fill out a job application, or even how to act in a work environment.

A role model and inspiration

Business major Raphael Nunez, Class of 2017, has ambitious and specific career goals: graduate from WSU, earn his Certified Financial Analyst designation, and give back to his community, maybe in public office. A native Spanish speaker, he offers many intangibles to the Reyes House clients—in addition to his job as a teacher and translator, he serves as a role model and inspiration to clients who can relate to him as a member of their own Latino community.

With his passion and understanding of the world of finance, Nunez chose to address a glaring need for basic financial literacy. To a person with substance abuse issues, a $20 bill represents enough money to fulfill a short-term need, the next fix. Nunez worked to change the clients’ perspective to more long-term goals, focusing on budgeting, saving money, figuring out how to live within their means, even just filling out paperwork to open a bank account.

“Financial literacy builds a foundation in order for them to grow,” he says. Nunez addressed these basic life skills in a 10-week curriculum that he adapted from established financial literacy resources such as MoneySKILL, an online curriculum by the American Financial Services Association Education Foundation. In future iterations of his curriculum, he will focus on application of these skills.

“One guy came up to me and said he opened a bank account for the first time,” says Nunez. They hugged, high fived, and celebrated this small but significant milestone with much emotion. “Just doing this simple thing gave him confidence.”

What made Nunez most proud was that the man went to the bank himself and followed through with what he learned in Nunez’s class. “What they need is a coach, not just an advisor. I’m not going to be there every time to help them with their problems. I can give them direction so that they can learn for themselves, and then in the future they can teach their kids the same lessons.”

A different type of restaurant

This past January, the Latin American Health Alliance opened Café Reyes, a colorful and cheery Shrewsbury Street restaurant featuring both delicious Cuban food and valuable employment opportunities for Reyes House clients. The Stoddard Charitable Trust and the Fletcher Foundation funded the purchase of the property, the Fuller Foundation paid for renovations, while the Greater Worcester Community Foundation provided money to hire a chef, Kenny Bourbeau. The café serves up breakfast and lunch featuring Cuban specialties such as fried plantains, empanadas, and black bean soup.

Enactus president and sophomore business major Monica Bhakhri took on the challenge of helping to market Café Reyes to the local community, including promoting the official opening ceremony in March. She wrote and distributed press releases, contacted media and targeted influential guests, and produced a radio advertisement that ran regularly on WSUR, the campus radio station, which helped increase the college student traffic. Her media relations efforts were rewarded with an article in Worcester Magazine about the opening festivities. Currently she and senior Tiffany Marquez are working on a mailing to residents of the local area highlighting Reyes House, the Café, and the menu.

Bhakhri also helped Nunez teach some of the financial literacy courses, and found the men eager and willing students.

“The men are so open to the information we are teaching them and they are hungry for that knowledge. They want to move away from that drug lifestyle,” says Bhakhri.

One of the goals of Café Reyes is to provide concrete work experience for the clients, who can then move on to other local restaurants or other job opportunities. Enactus member Amber Suarez, a sophomore business major, created pamphlets that spell out basic rules for how to behave in the workplace, with the ultimate goal of establishing a comprehensive workplace handbook. The pamphlets cover important skills, such as how to interact with customers and coworkers, and how to respond to supervisors.

Senior business major Brittany Desilets is both an Enactus member and a 2015 summer fellow for the Community Health Improvement Plan (CHIP), a long-term effort to address public health issues in the city of Worcester. As part of her fellowship, Desilets tested how easily health-care services can be accessed by those in need by contacting all the organizations on a 21-page list of service agencies she received from the United Way, a list that hadn’t been updated since 2012.

“Some didn’t answer, some didn’t return phone calls. Some were not accepting patients. Some were just not there anymore,” says Desilets, who plans to submit her final report by the end of September to the city’s Department of Public Health. “This is hugely valuable. People who are in real trouble won’t go through this entire list like I did. They’ll get frustrated and give up.”

In addition to using the information as the basis of her Commonwealth Honors Project, Desilets plans to create a brochure for Reyes House clients with updated substance abuse resources. Then she will sit down with the men and explain the services, how their insurance can pay for them, the eligibility requirements, and how to fill out the paperwork.

“Even if they don’t use it, just the practice in filling out paperwork is helpful,” says Desilets. “Many have never even filled out a job application. What stops them is fear they can’t do this.”

Read the full story in the fall 2015 issue of the Worcester State Magazine. 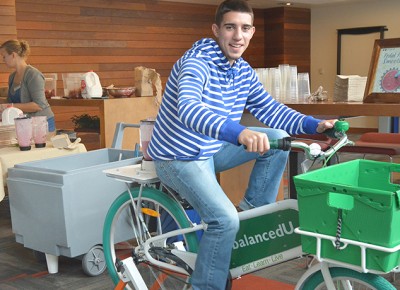 All three floors of the Student Center at Worcester State were abuzz with activity – perhaps a result of Ken Warchol’s beekeeping demonstration in the Lancer Lounge, but also due to the abundance . . .