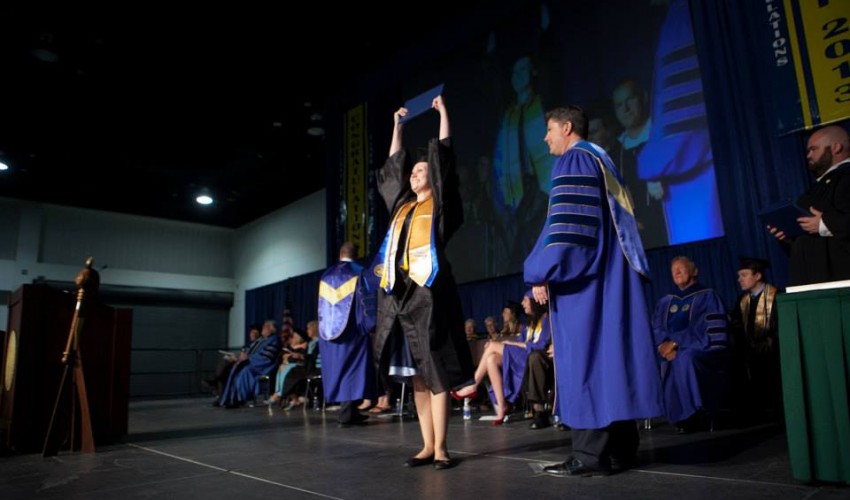 Worcester State University celebrated its 2013 Undergraduate Commencement, Saturday, May 18 at the DCU Center. With 1,019 undergraduate students receiving Bachelor of Arts and Bachelor of Science degrees, this class, inclusive of students who completed their degree requirements between last summer and May 2013, represents the largest Worcester State graduating class ever. (Click here to view the Facebook photo album of the ceremony.)

President Barry M. Maloney, the University’s 11th president, said, “I could not be more proud of the academic achievements and community service of this graduating class. They have worked hard, been actively engaged in scholarship and volunteer activities. This is a class that is changing the way the world works.”

President Maloney particularly noted the growing trend of WSU students completing parts of their undergraduate careers away from campus.

“I have committed this University to engage our students with the world,” he said. “Many of you have met that challenge by working side by side with faculty who are dedicated to preparing you for the real world. This engagement with the world includes for a select group of our graduates today a meaningful, academically grounded study way experience. Students in this class have traveled to Costa Rica, Mexico, Nicaragua, Morocco, and Tanzania. Our WSU Chorale will be in Italy next week and are scheduled to perform at the Vatican.”

Other students undertook domestic exchanges, and Maloney noted that four graduates were among Worcester State’s first to use this program model, studying at Texas State University at San Marcos, California State University-San Bernardino and the University of Toledo.

Class of 2013 Secretary Taylor Overton encouraged her classmates to never “let a daunting task keep you from reminding yourself why you are in these fields (of study) and why you want them to be a part of the rest of your lives.”

“We persevered and here we are. This kind of perseverance is not an innate quality. It is created, nurtured, and has come alive in every single one of us,” she said. “I hope that you never let go of this perseverance and strive to hold onto it, keep it burning inside you because that could be the defining circumstance between you as a Worcester State graduate and someone else going after the same job.”

The first in her family to earn a bachelor’s degree, Overton credited her family’s support for helping her reach this milestone. “I also hope that I have lit a spark in my younger siblings to make the most out of their college years. I hope they learn from my mistakes, my successes, and my decisions like I have.”

Student Government Association President Treavor Sansoucy noted that “Worcester State has not just produced a graduating class, but the next class of citizens that will run this state and our country. I congratulate…the educators of the next generation, the researchers for the cures of tomorrow, the business owners, the nurses and doctors, the lawyers, the performers and the first responders that will protect our commonwealth.”

The commencement speaker was Thomas J. Foley, retired colonel of the Massachusetts State Police. In 2004, Colonel Foley was awarded the United States Attorney General’s Award for Exceptional Service for his role in the James “Whitey” Bulger/John Connolly investigation. A career officer with the Massachusetts State Police, he rose to become its highest ranking officer in 2001. Since retiring in 2004, he has taught criminology at the University of New Hampshire. A native of Massachusetts, he earned a bachelor’s degree in criminal justice from Westfield State College and a master’s degree in criminal justice from Anna Maria College. He is the author of the book, Most Wanted – Pursuing Whitey Bulger, the Murderous Mob Chief the FBI Secretly Protected.

Colonel Foley shared his experiences as a new college graduate, rookie state trooper, a recruit to be part of the State Police’s investigation of Bulger and his partner Stephen “The Rifleman” Flemmi, and eventually as an author. “I am grateful for the opportunities I have had and am grateful to those who prepared me for them,” he said. “You are ready and prepared as well. You have received an excellent education.”

Drawing from his own experiences and events such as the 9/11 terrorist attacks, the hunt for Osama Bin Laden and most recently the Boston Marathon bombings, Colonel Foley pointed out that individuals have the power to make a positive difference in the world, even during dire situations. “No matter where you are as you sit here today, rest assured your success depends on one person: You. One person can and does make a difference,” he said.

Colonel Foley received an Honorary Doctor of Humane Letters. Additionally, the University conferred an Honorary Doctor of Public Health on Dr. Mary K. Alexander in recognition of her innovative work in nursing education. Professor Alexander is a retired member of the Dr. Lillian R. Goodman Department of Nursing faculty. Allen W. Fletcher received the Community Service Award for giving of his time and his wealth to a wide array of community agencies and institutions, including but not limited to the Youth Center, the Worcester Craft Center and The Gallery at WSU.

The Graduate Commencement was held on Monday, May 13 and Nurses Pinning Ceremony on Thursday, May 16. 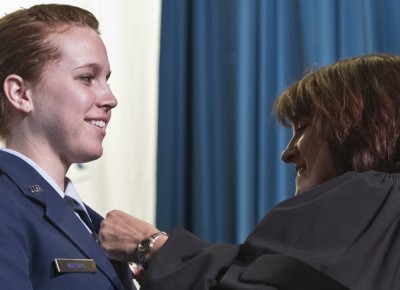 Dr. Mary K. Alexander, Worcester State Foundation Board member and WSU professor emerita of nursing, reminded the 64 graduates of the Dr. Lillian R. Goodman Department of Nursing at the annual . . .