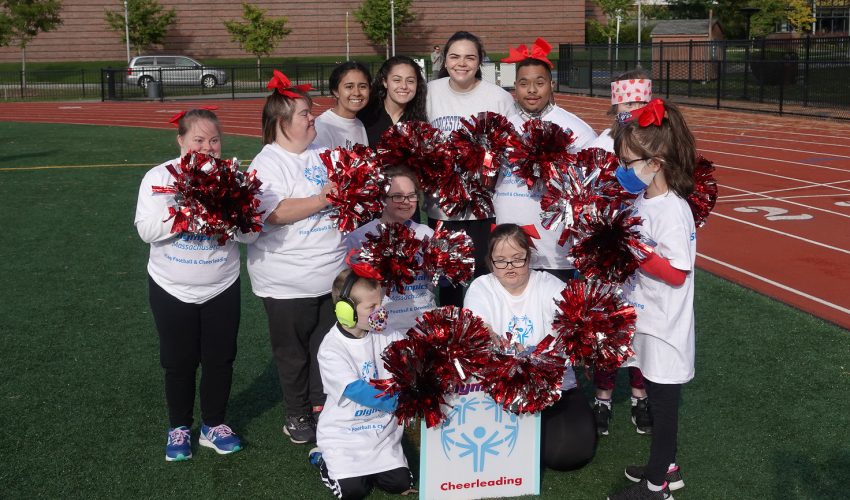 When Special Olympics cheerleaders stepped onto the field during the last local flag football game of the season at Worcester State University Oct. 17, they were met with a wave of support from football players, coaches, families, and friends. After four weeks of practice, the eight athletes performed a routine that held two separate cheers and brand new skills.

The dedication and hard work of three sophomore students at Worcester State University, Chanelle LaBossiere, Kelsey Houle, and Iza Julie Marques, made this program possible. Each week the three young women came together with ideas and practice lessons for the athletes in the hopes of building their skills and confidence. All that hard work paid off with a spirited performance by the athletes on the field at halftime at Gillette Stadium during a flag football tournament Nov. 20.

Marques never practiced cheerleading before, but was excited to introduce the sport to Special Olympics athletes and take the journey with them. LaBossiere and Houle have both been cheerleading for years and jumped at the opportunity to bring their passion for the sport to a new community of athletes.

“I heard about this program through Kelsey because we were on the cheer team together and I’ve always loved coaching,” said LaBossiere. “I felt that this would be a really different experience for me and could teach me new things.”

“The biggest success from this program was seeing so many athletes come out of their shell,” said Houle. “The first week I tried asking them to use a loud cheerleader voice, but they were all pretty timid and didn’t want to be loud. But by the end of the program, they were all so loud and everyone was cheering for them on the sidelines.”

Marques was also impressed at the ability of the athletes to build their confidence over the course of just four weeks.  “This program literally taught them to be louder and more present, and I think most of the time maybe they’re told to do the opposite in certain situations,” she said. “I think cheerleading teaches people to be more confident in their own skin, and for these athletes it allowed them to just be united with everyone else.”

But the athletes weren’t the only ones who walked away from the program learning something knew.

“I learned that we are conditioned to a ‘normal’ way of approaching situations. These four weeks just taught us that different people need things explained in a different way or maybe some more time to process something new,” said Marques. “As a nursing major specifically, it was eye opening to see that there are multiple ways to approach a situation and different ways to solve a problem.”

By giving Special Olympics athletes the ability to practice cheerleading on a college campus as participants in a program completely run by college students, everyone involved in the program was able to experience the joy of inclusion.

“Bringing in a new community of people has incredible value to a college setting. Colleges and Universities like to flex diversity initiatives and it’s important that diversity encompasses all people,” said Houle. “People with Special Needs want to have normal life experiences, and by implementing these programs through a college, you’re not just giving the athletes an experience they might not normally have, but you’re also exposing college students to a community they may have never interacted with before.”

At Gillette, the special athletes cheering squad appeared alongside Special Olympics MA Flag Football teams. To get ready for the big event, they were treated to a special practice session with the 2021-2022 Patriots Cheerleaders.

“The team’s participation at Gillette was honestly one of the best experiences I could have ever been a part of,” Marques said. “It was so rewarding to see our team proud and excited to stand on the field. We even had a couple of our pictures on the jumbo screen and every time it came up it was surreal.”

The stadium performance marked the end of the season for the special athletes, but there’s always next year.

“Many of them expressed their excitement to return next fall and we can’t wait to have them back,” Marques said. “Chanelle, Kelsey, and I are excited to expand on the program next year and can’t wait to continue to help them grow in their skills and gain confidence as individuals on and off the mat.” 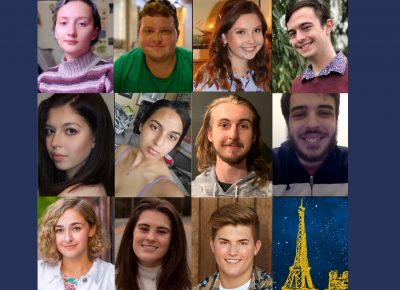