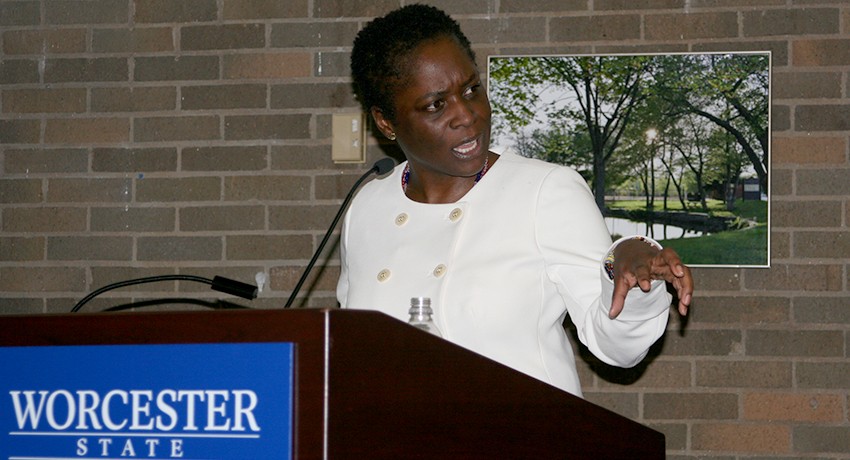 Who is black, who is not, and who cares? When it comes to answering these questions in the realm of American racial politics, says Dr. Yaba Blay, the task is not so simple.

“Somehow we seem to be clear about what whiteness is—or, rather, what whiteness is not,” said Blay. However, she said, when it comes to our understanding of what blackness is, a number of factors come into play which further complicate an already complex question.

Blay recently spoke at Worcester State University about her research and projects for the school’s Black History Month celebration, including her book and CNN documentary “(1)ne Drop: Shifting the Lens on Race.” The (1)ne Drop project explores the connections and nuances of skin color politics and black racial identity, and challenges the narrow perceptions of blackness, both as an identity and a lived reality.

The title comes from the “one-drop rule,” which holds that a person with any trace of black African ancestry, however small or invisible, cannot be considered white: they must be considered black. Blay pointed out that no other ethnic group is defined or counted according to the one-drop rule, and the rule itself is uniquely American: no other country has such a classification.

The concept of the one-drop classification began during the era of slavery, when whites, in an effort to preserve their race, began to define racial boundaries.

Fast-forward to 2012, and the ramifications of America’s past has had a profound effect on our understanding of what blackness is today. For the (1)ne Drop project, Blay interviewed over 75 people representing 20 different countries and countries of origin.

“Although contributors used a variety of terms to self-identify, they all see themselves as part of the larger racial and cultural group generally referred to as ‘black folks’,” she said.

The most important thing to take away from the (1)ne Drop project, said Blay, is that race is descriptive, not prescriptive. The project attempts to challenge the notion that blackness looks a particular way. “It’s not my goal to tell people how identify,” she said. “How you chose to identify yourself is exactly that: your choice.”

“However, in a time where so many people would rather delude themselves into believing that we live in a post-racial America and ignore our history of racism, it may be as important now as it’s ever been to ask: who’s black, who’s not, and who cares?”

Blay is a professor, producer, author, and publisher whose work focuses on global skin politics and colorism, and has been featured on CNN, MSNBC, NPR, and other media outlets. She is currently co-director and assistant teaching professor of Africana Studies at Drexel University.

The talk was part of Black History Month at Worcester State and was cosponsored by the Third World Alliance, the History and Political Science, Philosophy and Sociology Departments, the Office of Multicultural Affairs, the Women’s Studies program, the Intergenerational Urban Institute, Amnesty International, and the Brutus/Goldwyn Center for the Study of Human Rights. 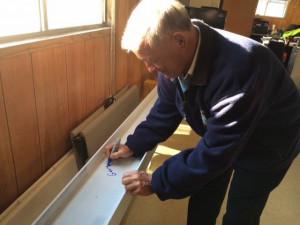 Sign the Beam to Be a Part of Worcester State History

All members of the Worcester State University community are invited to celebrate a milestone in the construction of the Wellness Center—the “topping off.” The topping off ceremony will take . . .