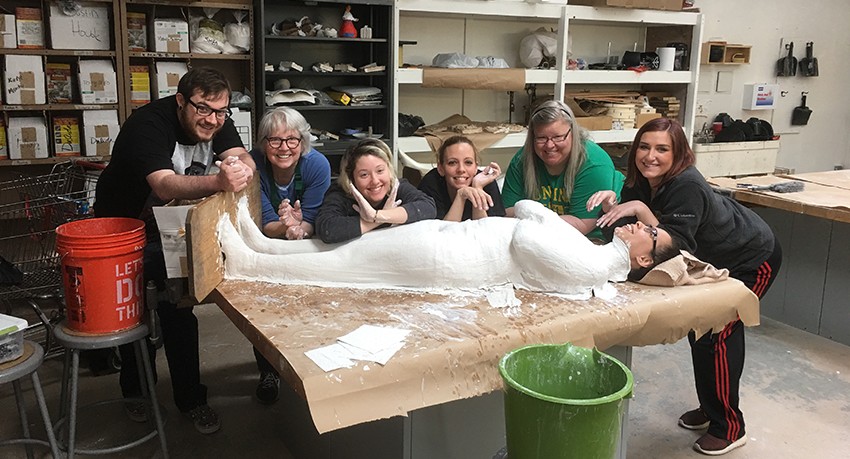 Research often reveals significant truths. And, when research meets art, it takes on a whole new dynamic. In the upcoming play, CitySpeak, Worcester State Theatre and the Visual and Performing Arts Department give a human voice to research, using research-based interviews with Worcester residents as the core and devised theatre as the medium.

CitySpeak premieres on April 7-9 at 8 p.m. in the Fuller Theater in the Shaughnessy Administration Building with a matinee on April 10 at 2 p.m. Purchase tickets in advance through the Box Office at 508-929-8843 or at BoxOffice@worcester.edu. Tickets are also available at the door.

Stories of the People

Presenting real stories in a light-hearted way, CitySpeak opens an avenue for conversation about issues that face people who live in cities. Taking place in the fictional city of “Trennenburg,” the residents of the city explain their grievances to the city officials.

CitySpeak, as a project, was born out of two linked courses, one in the Urban Studies Department and the other in the Visual and Performing Arts Department.

First, the stories behind CitySpeak came from 54 everyday Worcester residents, interviewed by Urban Studies students. After the residents told the students their stories and experiences while living in the city, the students analyzed the interviews.

The interviews revealed significant truths about living in the city, including common themes around the politics, policy and promises of city life.

To begin mapping out the scenes of CitySpeak, Urban Studies faculty and students worked with their counterparts in several Visual and Performing Arts courses, which is when the interdisciplinary event began to form.

With the data in hand, several VPA courses continued the work, including Devised Theatre with Dr. Sam O’Connell, Rehearsal and Performance taught by Professor and VPA Department Chair Adam Zahler, CitySpeak Sculpture taught by Professor Stacy Parker, and Photography with Professor Catherine Wilcox-Titus. The work from the latter two courses appear in the stage scenery.

The History and Political Science Department entered the project offering a class titled We the People taught by Dr. Charlotte Haller.

In the Devised Theater course, the group is working hard to finalize the production, and the cast—Tamari Streeter, Jon Bethel, Lillie Williams, Matt Gray, Eddie Sanchez, Olivia Edmondson, Erick Lindenberger, E. Jasper Bliss, and Kelsey Govoni—is creating the themes, scenes and dialogue of the production. Their overall goal is to create an allegorical representation of the stories told from those interviewed.

Zahler, Conroy and O’Connell are also seeking options for the future of this program and are in the process of creating a program that can be useful to other cities in opening a conversation between city residents and their officials.

CitySpeak, with its interdisciplinary nature, offers a peek into how research plays out and affects real-world people—what happens when the city speaks.

Written by By Lyn Branscomb and Bobby Costanzo

About the Photo: From left, Matt Gray, Gwendolyn Callahan, Michaela McBride, Nicole Huss-Howland, Lynn Blanchard, and Jenna Morris—all students in Stacey Parker’s CitySpeak Sculpture class—show a sample of their work. The plaster over Rebeca Ruiz, the student lying on the table, forms the cast.

Although its location may only exist on the web right now—and occasionally his office—Antonio Guijarro-Donadiós, Ph.D., has big plans and high hopes as the director of WSU’s new Translation Center. The center, which opened in February, offers affordable document translation services to help campus clients and community members communicate effectively in order to increase cross-cultural . . .