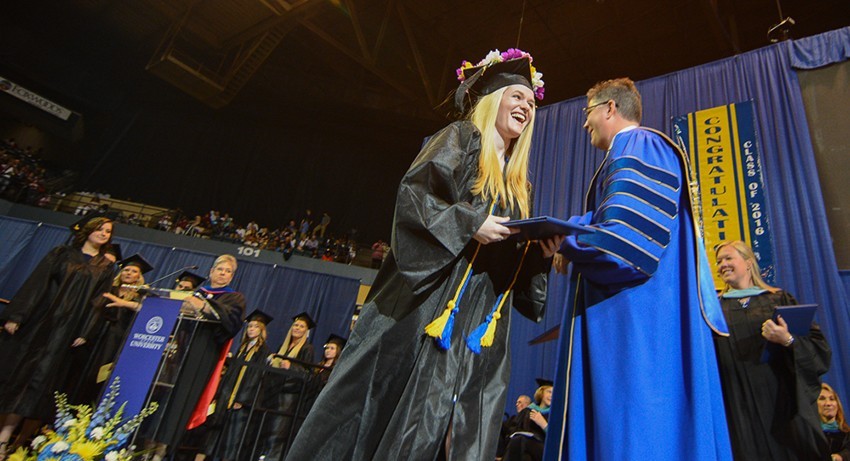 A Record Number of Undergraduates Earn Degrees at Commencement

A record 1,250 Worcester State University undergraduate students were eligible to walk across the stage of the DCU Center on Saturday, May 14 at a commencement ceremony featuring a keynote address by Massachusetts Lt. Gov. Karyn E. Polito. This is the largest graduating class in the University’s history. Those participating included August and December 2015 graduates, as well as those eligible for May 2016 graduation.

“Worcester State will always be our alma mater, and we will forever be Lancers,” Klaes said. “Wear that title proudly, and make your next chapter great, because your degree is what you make of it.”

In addition to the conferral of Bachelor of Arts and Bachelor of Science degrees, the University conferred an honorary Doctor of Public Administration upon Polito, bestowed its Community Service Award to former Worcester County District Attorney John J. Conte, and presented the George I. Alden Excellence in Teaching Awards to Professor of Philosophy Henry Theriault, Ph.D., and Assistant Professor of Chemistry Jeremy Andreatta, Ph.D.

Polito is the 72nd lieutenant governor of Massachusetts. Prior to her 2014 election to that office, she had served many years as a state legislator, advocating for public safety with legislation such as “Jessica’s Law” in 2008, which provides for mandatory minimum sentences for certain sexual crimes on children and requires more comprehensive reports on offenses. She also supported legislation to crack down on drunk drivers, mandate defibrillators in public schools, and strengthen the experience requirements placed upon young drivers.

Conte represented the Second Worcester district as a member of the State Senate from 1963 to 1976. He served on 15 legislative committees, and chaired six, including the Senate Judiciary Committee. He is the longest serving district attorney in Worcester County’s history, having served for 30 years (1976-2006).

Graduating undergraduate students and their families also heard from WSU President Barry M. Maloney and representatives from the Legislature and the Massachusetts Board of Higher Education, all of whom spoke at the ceremony.

“We thank you for your determination to succeed, and we applaud your achievements,” Maloney said.

Check out the photo highlights of the ceremony on the Worcester State Facebook page. 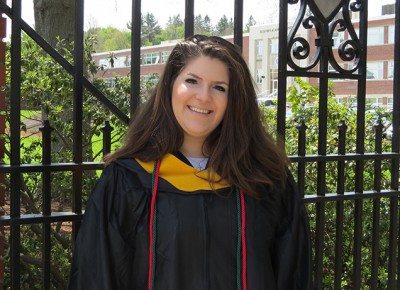 For Verzhiniya “Virginia” Eliya, 2016 will be memorable for its happy endings. She is earning her master’s degree this month, and her mother, father, and sisters recently reunited in France . . .