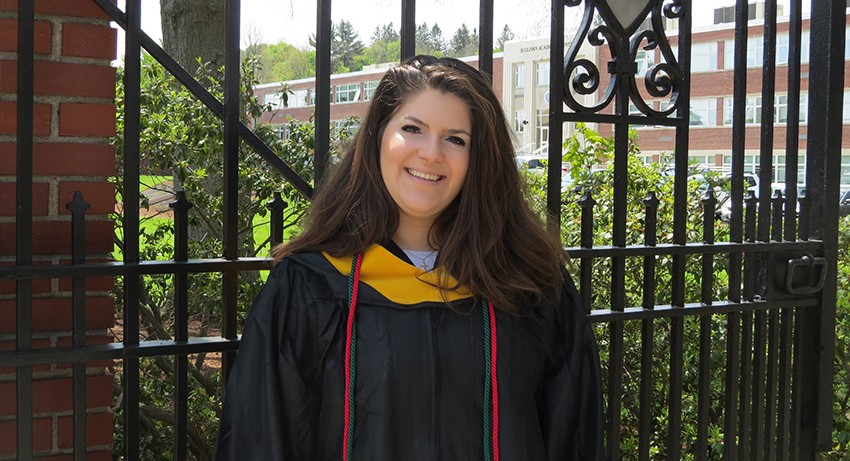 For Verzhiniya “Virginia” Eliya, 2016 will be memorable for its happy endings. She is earning her master’s degree this month, and her mother, father, and sisters recently reunited in France after being separated in Ukraine and Syria.

A self-professed adventurous spirit, Eliya fulfilled a childhood dream in 2009 after meeting relatives from Grafton, Mass., at a family wedding. She uprooted herself from her family homes in Syria and Ukraine and moved to Connecticut to attend Marianapolis Preparatory School.

“I’ve always been fascinated by America,” she says. “I used to watch American shows all the time.”

After graduating from Marianapolis in 2010, Eliya chose to apply to and attend Worcester State University because of her relatives’ close proximity to Worcester. Here, she followed in her father’s footsteps by majoring in biotechnology.

“I did the biotech program because I love science, and my father is a doctor, an eye surgeon,” she says. “Biotech looks for ways to improve human life—whether it’s for crops, the environment, or the medical field. It’s a way of using new techniques to manipulate biological processes to improve human life.”

Eliya credits all the professors in the biotechnology program for her exceptional experience. They “do a good job having us do things that are being done in the industry,” she says. But Professor of Biology Maura Pavao and retiring Professor of Biology Peter Bradley were especially helpful.

Pavao, who was Eliya’s undergraduate advisor, “has a special place in my heart.” She saw Eliya grow as a student. Plus, “she’s an amazing professor. She teaches some of the hardest classes in the program,” she says.

Bradley’s tissue culture class also was very exciting and useful. “He teaches his students many good skills,” she says.

When she wasn’t in class or the lab, Eliya was busy making Worcester State her new home. She was a resident student her first year, and then worked as a resident assistant her sophomore year until she completed her bachelor’s degree in 2013. She also worked as a student librarian and a Presidential Student Ambassador. As a graduate student, she was selected for an assistantship as a lab technician for the biotech program.

“I just kind of immersed myself in the culture here,” she says.

Eliya—who grew up mostly in Aleppo, Syria, but spent summers with her maternal grandparents in Zakarpattia, Ukraine—also dedicated herself to improving her English language skills. “I had many late nights of studying. A lot of my challenges were language-based. I had to reprogram my brain to understand English,” she says. “Managing my time was another challenge. I got involved in a lot of programs [on campus] to learn how to organize my time.”

The Worcester State community, in turn, rallied to Eliya’s side as her native Syria deteriorated into civil war and Aleppo became one of the strategic targets of rebel forces, the Assad regime’s military forces, and the Islamic State.

Her mother, an opera singer, and sisters fled to her parents’ home in the western region of Ukraine, while her father stayed in Aleppo.

“My focus was still to finish school in spite of all that was going on,” Eliya says. “The community here at Worcester State really helped me. The RAs and my teachers would check on me to see how I was doing.”

In doing so, she has spent many hours in one of her favorite places: the lab. “I always pictured myself working in a lab, even when I was little,” she says.

She also enjoyed an internship conducting prostate cancer research with Dr. Thomas Tao Wang at UMass Medical School. Though closer to her father’s path in medicine, she emerged from the internship thinking she would rather work for pharmaceutical companies to develop new drugs than in medical research.

Reflecting on the past five years of war in Syria, Eliya says that “dealing with the emotional stress and school was hard, but I got through it. I’m here.”

She recently finished writing and defending her thesis and will offer words of inspiration to her fellow graduates as the student speaker at WSU’s Graduate Commencement on May 13.

“Next, I will take a little down time and then start looking for a job,” she says.

Her parents, meanwhile, are now back together, living safely with her sisters as refugees in France. Through the long ordeal, “I was inspired by their resilience and strength,” Eliya says. “I’m so grateful for all their love and support. It all worked out in the end.” 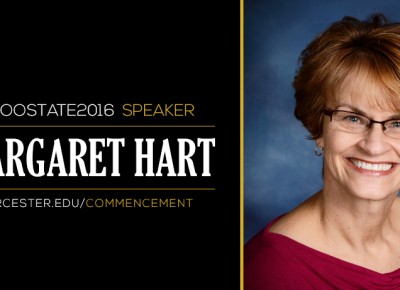 Worcester State to Award Degrees to Over 220 Graduate Students

More than 220 graduate students are eligible for graduation this May, and they will have degrees conferred upon them, as well as take part in the ceremonial hooding, on Friday, May 13 in Sullivan . . .