The Aisiku family will be honored at Worcester State University’s Scholarship Tea on Sunday, May 1, for their educational accomplishments, personal and professional successes, and special connection to WSU. The event starts at 3 p.m. in the May Street Building Auditorium.

Funds raised from the event will support the Dr. Joshua Unuigboje “Oje” Aisiku Scholarship, which is awarded to an underrepresented student whose goal is to work in the Worcester public school (WPS) system.

The Scholarship Tea is an annual event that recognizes outstanding citizens whose work stimulates the vitality, health, and success of their communities.

Oje Aisiku taught at WSU for 24 years, bringing his broad teaching background and extensive administrative experience to the Education Department in 1985. He was appointed a faculty fellow in the Division of Continuing Education and was the coordinator and advisor for the Graduate Middle/Secondary education program.

Dr. Oje retired in May 2009 to take an appointment as the founding president of a new private university, Chrisland Millennium University in Abeokuta/Owode, Ogun State, Nigeria.

Brenda Aisiku is a graduate of Cornell University and devoted her life to education. She is a retired special education teacher who taught in the Worcester school system and was named Worcester Teacher of the Year in 2006. She was also inducted into the WPS Administrators Hall of Fame.

Three of Dr. Oje and Brenda Aisiku’s children graduated from WSU, and all four siblings went on to earn doctoral degrees.

Imoigele “Imo” Aisiku ’91 is now assistant professor of emergency medicine at Harvard Medical School, where he is setting up a traumatic brain injury clinic at Brigham and Women’s Hospital. He was previously the director of neurocritical care at Memorial Hermann-Texas Medical Center and often acted as a spokesperson for the care team that treated U.S. Rep. Gabrielle Giffords in 2011. He earned his medical degree from the UMass Medical School. He received an Outstanding Young Alumnus Award in 2010 and was the undergraduate commencement speaker in 2012.

Omozuanvbo Aisiku is a cell biologist who works for Instrumentation Laboratory, a biotechnology firm. He received his Ph.D. in biochemistry and structural biology from Stony Brook University Health Sciences Center School of Medicine in 2010, and served as a postdoctoral fellow at Beth Israel Deaconess Hospital focusing on cell signaling as it relates to hemostasis and thrombosis.

Two of the Aisiku siblings are attorneys: Ojeiku C. Aisiku earned his J.D. from Brooklyn College in 2014 and is a patent attorney at the law office of Eckert Seamans in Brooklyn. Imie Aisiku Harber is an attorney at the Law Office of Christopher Costabile and field counsel for Liberty Mutual Insurance in Richmond, Va. She received her bachelor’s degree in political science from the University of Massachusetts Amherst in 2001 and her J.D. from Thomas M. Cooley Law School in 2006.

For more information or to register for the event, contact the WSU Alumni Office at 508-929-8141. 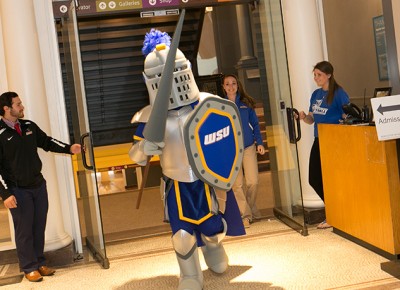 The first-ever Lancer character mascot—Chandler H. Lancer—was unveiled amid the suits of armor of The John Woodman Higgins Collection at the Worcester Art Museum on Thursday, April 21. A large audience of students, alumni, faculty, staff, and friends gathered at a reception in the museum’s cafe to welcome the new addition to the WSU family. "We are thrilled to be able to reveal WSU’s . . .