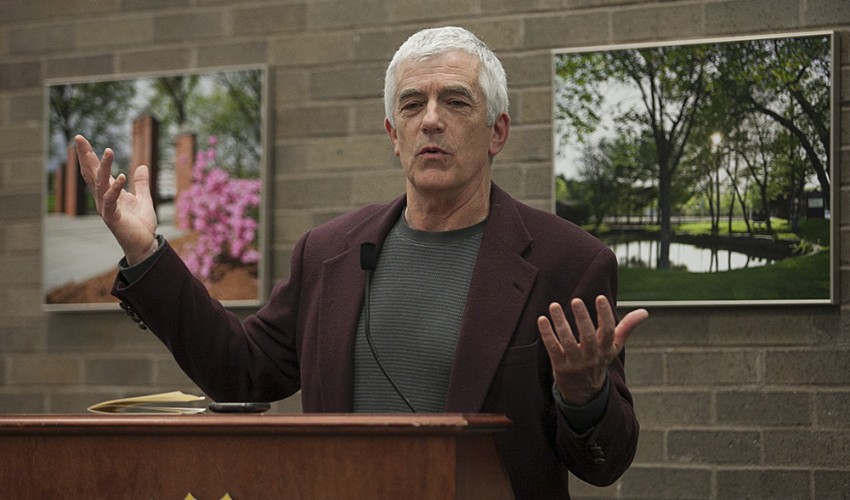 Allen Fletcher, retired chairman and owner of Worcester Publishing Ltd., publisher of Worcester Magazine, Worcester Business Journal, and other periodicals, and member of the Canal District Alliance, emphasized how important it is for Worcester residents to maintain the city’s personality and originality in his speech “All Roads Lead To Kelley Square” at the annual Celebration of Service Across the Ages.

“Kelley Square is a marvel of traffic non-management,” Fletcher said. “It is the last democratic institution in America, and it actually works.”

Maureen Power, professor of Urban Studies and director of the Intergenerational Urban Institute (IUI), introduced Fletcher and the ceremony, which honored students and faculty from all over campus.

“If we tried to honor everyone involved in service at Worcester State, we’d be flowing out the door and into the parking lot,” Power said.

Women’s basketball coach and Associate Athletics Director Karen Tessmer was among those honored. She was not present to accept her award, but she left a written message with her advice to students. “Life’s lessons are learned when you step outside of your comfort zone,” she wrote.

Some of the WSU students who were honored for stepping outside of their comfort zones were Samantha Thebeault and Kelsey Hopkins.

Thebeault received the History Department’s award for being the student ambassador for the Nicaraguan Alternative Spring Break in 2012.

Hopkins received the Student Engagement Award for her multiple efforts, including her work with the IUI’s English Language Learner Program, the Center for Service Learning and Civic Engagement (CSLCE) advisory board, and the WSU Neighborhood Council. Mark Wagner, director of the CSLCE, presented her award. “I have to constantly remind her not to take on too much,” Wagner said.

Other awards went to students of the WSU Nursing, Education, and Psychology Departments.

The WSU chorale closed the ceremony by performing “Somewhere Over the Rainbow” and other songs.

The event was sponsored by the CSLCE and the IUI. It was catered by Chartwells. 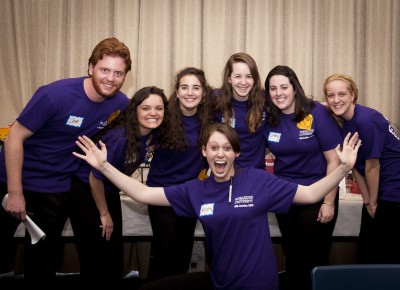