Twelve students spent two nights of their spring break at Heifer International’s Overlook Farm in Rutland learning about the interconnectedness of the global food chain and the daily struggles of people living in poverty, according to Center for Service Learning and Civic Engagement Director Mark Wagner. This inaugural alternative spring break program was meant to “connect knowledge to experience,” he said.

As part of the farm’s Global Gateway program, the students, Wagner and Intensive English Language Institute Instructor Catherine Goodwin received some rice, vegetables and eggs upon arrival and then had to build a fire to cook a meal. They slept in simple housing during their stay.

Students focused their time in the farm’s Global Village. The village was made up of replicas of homes in countries around the globe such as China, Peru, Kenya, Poland, Tibet and the Appalachian region of the U.S. Each home featured historical and educational items such as clothing, posters, and artifacts that clearly represented each culture. There were people inside each house who spoke about that country’s agriculture, resources, how they farmed, and how they used animals as a food source. The group participated in daily farm chores such as cleaning out the chicken coops and shoveling hay.

At the Tibetan home, the group made a traditional meal called Zamba, an oatmeal-like dish. They also slept in this home, which had a concrete floor and just a yak rug to sleep on. This helped everyone gain a deeper understanding of sustainable agriculture and what life would be like in another country, Wagner explained.

“Together we learned about how important it is to share the gifts that we as Americans are more fortunate to have,” said Katrina Marshall ’15, a psychology major. “We also learned about the Heifer program, which is focused on helping communities to grow together and empower themselves through region-specific methods.”

The overall experience was “really fun and very educational,” she said. “It was really nice to get away from the rush of modern day life, and go out and experience farming. It was a rare opportunity to connect with nature and lead a better, cleaner and less harmful life.”
Wagner said he hopes to make the farm an annual spring break trip. 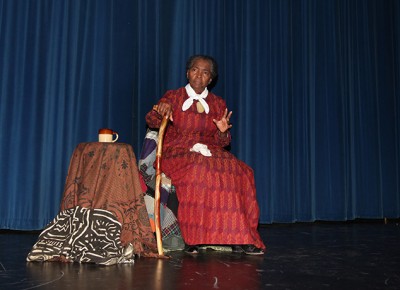 As Harriet Tubman, Gwendolyn Quezaire-Presutti told the story of Harriet's life and involvement in the Underground Railroad to life for Worcester State and Worcester middle- and high-school students . . .