A crowd was gathering. There were snacks and refreshments lined up on a table by the door. It really didn’t look like this was the preparation for the second annual second annual Gift and Art Auction, but here it was on the evening of Friday, December 7.

A couple Worcester State University Presidential Student Ambassadors greeted those who entered. After things settled down, Mayor Joseph Petty took to the podium to address the attendees. “I’d first of all like to thank everyone for coming out to show support for their university,” he said.

A brief speech and a round of applause later, the headliner for the evening was mentioned—though his set came about an hour later. After the sponsors served dinner, Jimmy Tingle was introduced and took the stage.

To say Tingle was very funny would be an understatement. His humor was sarcastic, dry, analytical, and well delivered. His comedic timing was top-notch, as was his storytelling.

The son of a Cambridge cab driver, Tingle recounted how, growing up, they took a cab everywhere…even hunting. . . to Woburn. Tingle was funny on a range of subjects, all of which came under the title Humor for Humanity, and his stories were loosely based on his recent run for president. One of his platform positions was that he would merge the Catholic Church and Planned Parenthood, producing Planned Catholic Hood.

Now that the audience was warmed up and in a good mood, bidding for the auction began. The auction itself was meant as a charity gala for the McCarthy Coyle Wagner Scholarship in Community Activism, a scholarship offered to students who are active in their community. Rose Mathieu ’13 received the first scholarship this year. Students interested in applying can go to www.worcester.edu/scholarships to learn more.

The Center for Service Learning and Civic Engagement sponsored the event. 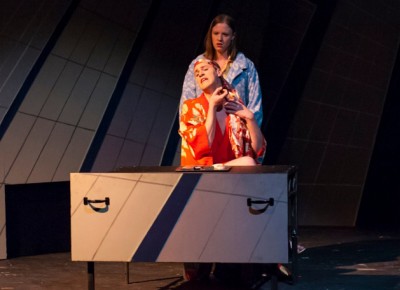 The words “the show must go on,” which were made famous in Irving Berlin’s “Annie Get Your Gun,” came to life for the actors and crew of Worcester State Theatre’s latest production, . . .