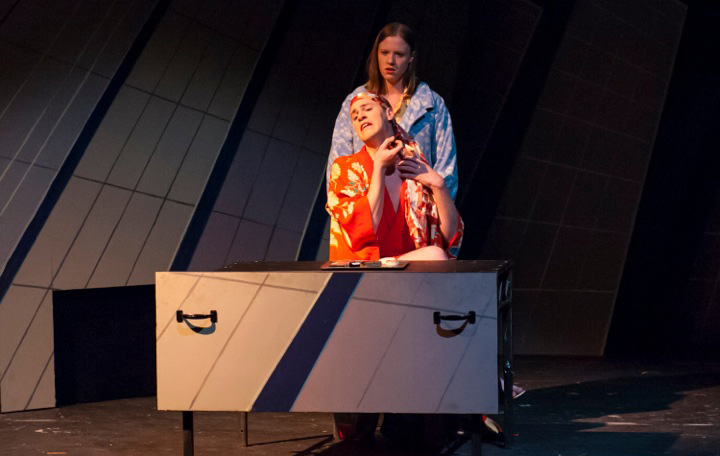 The words “the show must go on,” which were made famous in Irving Berlin’s “Annie Get Your Gun,” came to life for the actors and crew of Worcester State Theatre’s latest production, “Angels in America: The Millennium Approaches,” when they faced a burst water main that threatened the cancellation of the show.

Rallying to ensure the show’s success, faculty and students turned a local café into temporary headquarters and planned for as many contingencies as possible. They searched for alternative rehearsal space and even, should worse come to worst, alternative performance space. They ended up rehearsing in the May Building (Temple Emanuel) and, luckily, performed in Fuller Theater.

Despite the inability to complete full technical and dress rehearsals for three days, the show still went on.  It opened November 15 to a full theater, and continued its run through the weekend.

The award-winning play weaves the struggles of real people as they deal with HIV/AIDS and sexual identity with the changing landscape of politics, ideology, and power in Reagan’s America. Set in 1985, “Angels in America: the Millennium Approaches” revolves around Prior, who is HIV positive, and his lover, Louis, who is leaving him; Joe, a closeted, Mormon Republican lawyer and his frustrated, pill-popping wife, Harper; Roy Cohn, the megalomaniacal, political power-broker; and a small host of others as the time of the angels of the apocalypse draws near.

The cast of “Angels in America” brought dignity and grace to what was in the 1980s an unspeakable disease, AIDS, and to what was never talked about, homosexuality. With each emotional moment, whether angry or sad, the audience was brought to the brink of understanding of how homosexuality and AIDS affected the lives of people from different social, economic and moral strata.

The costumes reflected both the subdued and unreal aspects of the play as the characters lived in both the real world and the fantasy world.

The cleverly designed, yet simple set, allowed the show to bring to life the varying worlds in which the characters lived. The basic stage was a cityscape with the night stars reflected on the backdrop. At the end of the final scene, the larger-than-life angel closed the show, giving thought to the angels in our America.

Chosen by professors and students, the play is part of WSU’s Fall 2012 Theme Semester, “Contagion: How Things and Ideas Spread and Evolve.” 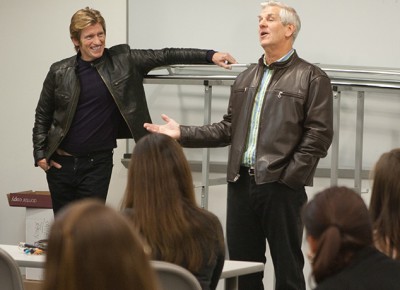 Prior to the showing of "Burn: One year on the front lines of the battle to save Detroit" at Worcester State University on November 15, some students who are criminal justice and nursing majors . . .