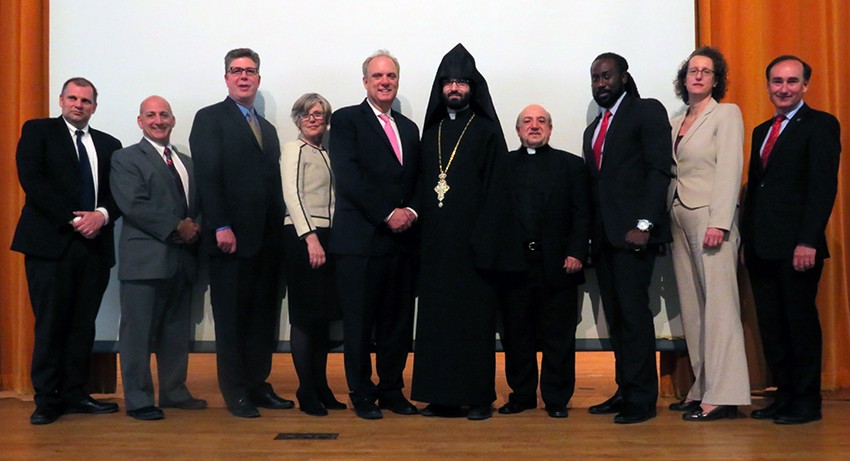 Author: Stories Can Raise Awareness of the Armenian Genocide

Armenian American author Chris Bohjalian recently spoke to a supportive crowd in commemoration of the 101st anniversary of the Armenian Genocide at Worcester State University. His passionate remarks made it clear that a century later, Armenian descendants still feel the pain and frustration of Turkey’s refusal to acknowledge the event.

Bohjalian described the resounding impact of his travels through western Armenia while showing the desperate state of once revered churches, which now stand as forgotten relics. A 1,000-year-old church on Akhtamar Island in Turkey sits vandalized and riddled with bullet holes after being used as a shooting range during World War II.

In spite of the challenges the sovereign state faces, Bohjalian encouraged the crowd by describing meetings with bright students at rural schools that “are facilities that we would be proud to have any of our own children attend.”

The author shares the Armenian experience in his novels. His 2012 New York Times bestseller The Sandcastle Girls follows a granddaughter learning more about her heritage through the love story of her grandparents following the genocide. After a failed attempt to get a manuscript about the genocide published, success came when he realized he did not need to write for Armenians, but “for my fans who could not find Armenia on a map.”

He continued to stress the importance of sharing these stories as a way to make the injustice known.

“While so many of our ancestors’ voices were still, the descendants are speaking more passionately and powerfully than ever before,” Bohjalian said.

By remembering the past, Bohjalian hopes to find a brighter tomorrow to honor the estimated 1.5 million people who died during the genocide.

“The fact is, we are still here, we are alive; Turkey failed,” he added.

Also speaking at the event was Dr. Jermaine McCalpin, who is praised as a leader in the discussion on reparations for Armenia as a means for justice. A professor at the University of the West Indies in Jamaica and a member of the Armenian Genocide Reparations Study Group, McCalpin gave an insightful and firm address on the importance of reparations to the process of healing.

“You can’t repair something that you’ve never acknowledged,” McCalpin said. “And part of the problem with denial is that it gives the power to the denier to essentially say ‘this thing never happened.’ We have to wrestle that power away to say not only did the genocide occur, but those who have suffered continue to suffer.”

The night began with a prayer by the Rev. Aved Terzian of Worcester’s Church of Our Savior, followed by a welcoming by Worcester State Provost Lois Wims.

In a proclamation dedicating the event, Worcester Mayor Joseph Petty touched on the need to “stay awake and vigilant” to the dangers of history repeating itself. He also offered praise to the guests for speaking with truth and justice in mind before awarding them both a key to the city. The Very Rev. Sahag Yemishyan of Holy Trinity Armenian Apostolic Church in Worcester led the closing prayer.

Event organizer, WSU Professor of Philosophy Henry Theriault, Ph.D., was pleased with the event and what it meant to the community.

“Chris Bohjalian and Jermaine McCalpin combined for a truly landmark event. Each gave cutting-edge speeches that together set an important agenda regarding the Armenian Genocide in the post-centennial era,” he said. “Worcester State has demonstrated once more in a profoundly meaningful way the depth of its commitment as a public university to its own students and the broader community.

“This surely means a tremendous amount to Armenian students at Worcester State and Armenians from Central Massachusetts and beyond,” Theriault added. “On a personal note, I am truly proud of my university and the significant role it is playing in an issue of global concern and with great geopolitical consequence.”

The remarks “not only provided new ways of thinking about the future of Armenians and other groups victimized by mass violence, but both [speakers] emphasized that the route to that better future requires going through the past to address the outstanding harms of the mass violence,” he said. 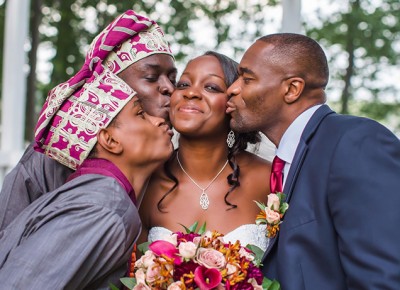 The Aisiku family will be honored at Worcester State University's Scholarship Tea on Sunday, May 1, for their educational accomplishments, personal and professional successes, and special connection . . .