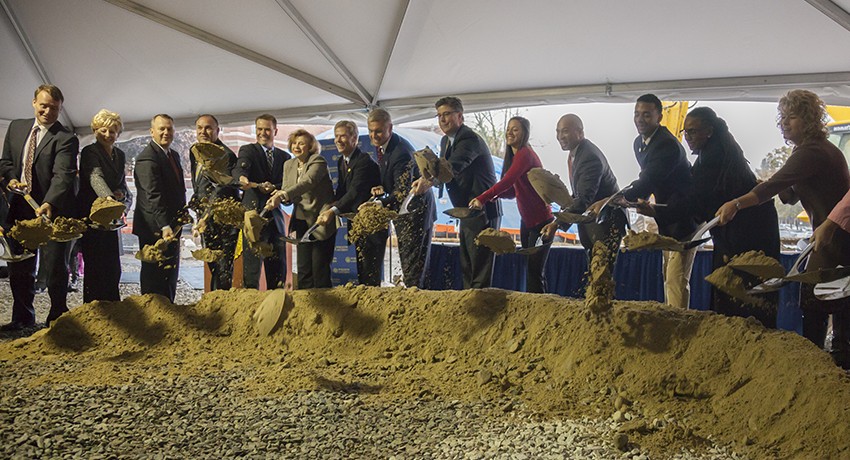 Although the wind and rain may not have been the ideal conditions for the groundbreaking ceremony of the new Wellness Center, it was countered by the glowing praise from state and university officials who spoke of Worcester State’s success and optimistic future.

“This exciting time is what I like to call a renaissance here at Worcester State University,” said Ron Valerio, Chair of the University’s Board of Trustees. “For those of you who have not been on campus for a long time, this transformation is incredible, and we are leading the state in becoming a 21st century higher education institution.”

The construction of the $52.6-million, 101,000-square-foot facility is part of a recent building boom on campus, with the new Sheehan residence hall opening last month, and the current renovations to the Student Center underway, which will be completed in spring 2015. Thanks to a $200 million investment from the University and its financing partners, the revitalization of Worcester State reflects Massachusetts’ increased support of public higher education institutions.

“Working with this Legislature,” said keynote speaker Governor Deval Patrick, “we have made the largest investment in public higher education facilities in history.”

The Wellness Center, which is slated to open in 2016, will include three exercise rooms, a multi-purpose gym, a competition gym, batting cages, instructional and community space, and a lounge, as well as many other amenities.

President Barry Maloney noted that the Center will also be the fourth building on the WSU campus that meets the LEED (Leadership in Energy and Environmental Design) certification standards. The University has focused on sustainable practices in many of its latest projects, including installing 540 solar panels on the Learning Resource Center, greatly increasing LED lighting, and establishing a thriving “Garden for All Ages,” which helps provide food for the city of Worcester.

“It is no wonder that the Princeton Review ranks us as one of the 332 most  environmentally responsible campuses in the country,” said President Maloney.

The new Wellness Center will replace the now demolished 1958 facility, which was built to accommodate only 400 students – a fraction of the university’s current population.

“This is no longer a commuter school,” declared Senator Harriette Chandler, “where somebody drops in, takes a class and leaves. This is a place where people come, where they learn, and where they become part of a community.”

Former Trustees chair John P. Brissette, who was involved in ensuring that state funding moved forward for the project, also offered his perspective, as an alumnus who cares deeply about Worcester State University. He said his advocacy stemmed from knowing how deep the need was for students to have a new facility.

Angela Grassetti, senior lacrosse player and co-vice president of the Student Athlete Advisory Committee asked fellow student athlete Terrence Gibson to join her at the podium. She said, “With the new Wellness Center, the spring and winter sports will no longer have to travel to other facilities for practices and games because we will have the convenience of staying on campus with our new courts.”

Governor Patrick noted that there was still much that needed to be done to improve the state’s aging and outdated higher education facilities, but insisted it was the students, not the buildings, that were at the heart of the matter.

“It is for the students, with the kind of demands and expectations we make on them for excellence, that we have to raise to their standards, and so that we can raise the standards for the whole of the Commonwealth,” he said. “For a population of that talent, shabby is not okay.”

Worcester State University partnered with ARC/Architectural Resources Cambridge on design of the facility, and is partnering with the Massachusetts Division of Capital Asset Management and Maintenance led by Commissioner Carole Cornelison, and W.T. Rich Company on construction of the facility. 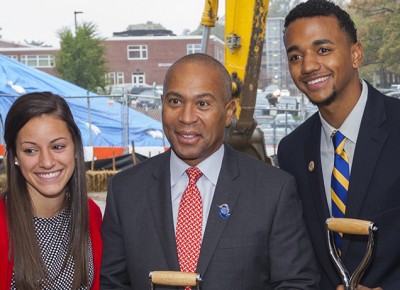 Governor Deval Patrick today joined state and local officials at the groundbreaking ceremony for the new Wellness Center at Worcester State University. “By strengthening the infrastructure of . . .