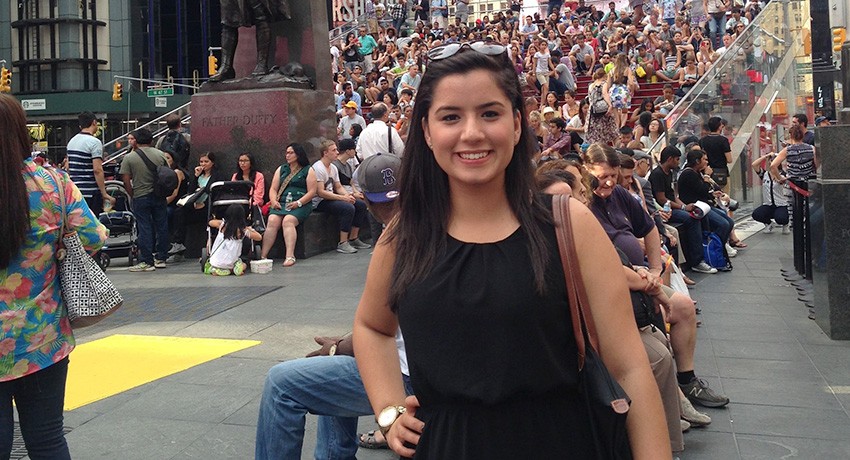 Optimism and grit—plus business smarts—earned Monica Bhakhri a coveted spot in Deutsche Bank’s dbAchieve sophomore internship program this past summer. The placement also was a win for Worcester State and public higher education in general.

That is because Bhakhri represented a “non-target school” in a pool of applicants predominately from Ivy League and other target universities selected from hundreds of applications to interview for dbAchieve. Even then, Deutsche Bank and other prestigious banks consider state flagship universities, such as University of Massachusetts Amherst, typical non-target schools, “not a small state school” like Worcester State, she says. And usually, only 25 percent of seats are reserved for non-target schools.

The path Bhakhri took to reach that entry point in the consideration process is a testament of her determination in itself. She spent part of her sophomore year—when she wasn’t in class, studying, working for Stone Temple Consulting, or serving as president of the WSU Enactus team, vice president of Phi Eta Sigma national honor society, co-chair of the Student Affairs Committee, a Class of 2018 senator, and a member of the Class of 2018 Committee—applying for about 80 internships at well-known companies, whether or not she had internal references or connections.

“I wasn’t focused just on banking at the moment. I knew banking was my ultimate goal, but at that point, I just wanted a brand name on my resume so that I could gain the professional experience and merit needed to get into a ‘bulge bracket’ from a non-target institution,” she recalls.

The dbAchieve program is a summer internship program at its Wall Street location specifically geared toward college sophomores of diverse backgrounds. “I was born in India, grew up in a suburb outside of Worcester, and love to travel,” Bhakhri says. “I don’t fall squarely into Indian society and am even often believed to be of other nationalities. I was always different than my friends, whether at a suburban high school or at Indian events.”

She wrote about that in her essay as well as how that influences her commitment to never stereotype others based on things such as appearance or where they went to school. In her diversity statement, she also talked about the importance of having a diverse workforce that includes women and its benefits.

Foot in the Door

After receiving the call from Deutsche Bank inviting her to the first round of interviews, an ecstatic Bhakhri started intense research on the company and its Global Transaction Banking Division, where she would interview.

The bank flew her to New York City and paid for her expenses. Early in the process, she says, “I met a lot of amazing candidates from schools like Harvard who had done things like start their own consulting firm or nonprofit. I felt a little alienated and unsure of myself. They also all seemed to know each other, somehow someway.”

It was only after receiving a phone call inviting her to the next round of interviews that Bhakhri felt somewhat comfortable. “That was when I noticed that the other candidates were starting to take me seriously. They invited me over to their table for lunch and were interested in learning more about me,” Bhakhri says.

She was confident about her performance during the second interview, but still thought that being selected as one of three finalists was a long shot. But as she charged her phone at LaGuardia Airport, one of the Deutsche Bank managing directors she interviewed with called.

“She said, ‘Monica, we would love to offer you a position in our internship program, and we really hope that you’ll consider us,’” Bhakhri recalled for state Department of Higher Education Commissioner Carlos Santiago when he visited WSU in April 2016. “For me, having that chance without any internal references or connections, which are huge in the business industry, really proved to me that, yes, there really is a state school stigma, but you just got to keep pushing for it and you’ll eventually get your dream.”

Bhakhri spent the summer working for Deutsche Bank’s Structured Trade and Export Finance Team—one of the teams she was most interested in. The team helps finance projects that have an underlying trade aspect with countries in the Americas.

“Sometimes these kinds of projects require the team to collaborate with other Deutsche Bank teams and other banks all over the world,” she explains. “It was really interesting to see how much teamwork and collaboration can go into one deal and how much coordination is required when teams are spread out geographically.”

Bhakhri’s main assignment was creating a sustainable dashboard in Excel to forecast revenue for the New York team’s portfolio. She also helped conduct research on countries involved in potential deals, including public perceptions about the project and what would happen if a country defaults on a loan.

She found herself recalling what she learned in Microcomputer Applications and, to a greater extent, Money, Banking, and Monetary Policy taught by Professor William O’Brien, Ph.D., and Accounting I and II taught by recently retired Professor Maureen Stefanini, Ph.D., both faculty in the Business Administration and Economics Department.

Bhakhri kept in touch with Stefanini and Professor—and Enactus team advisor—Joan “Jay” Mahoney, Ph.D., throughout the summer. Mahoney and Stefanini’s continuous encouragement was indicative of the way members of the department rallied to support her throughout the application process and the internship itself. “They really provided the encouragement I needed to pursue this,” she says.

The experience “definitely allowed me to decide what I want to do for my career,” Bhakhri says. “I learned so much from my manager and team members. They made me feel like an actual team member, not just an intern. I met some amazing and phenomenal people over the summer, both full-time DB employees and summer analysts. Deutsche Bank invests a lot of time recruiting and retaining top talent. They took us to so many places—a Broadway show, a cruise, an arcade. That was very, very nice of them.

“But what stood out most to me was how invested Deutsche is in creating a diverse workplace,” she adds. “The bank is a pioneer in the industry for some of its diversity programs, including its DB Pride and Women on Wall Street groups.

“And most importantly, the GTB Division is committed to creating a warm and friendly atmosphere,” Bhakhri says. “I felt so comfortable approaching managing directors and senior leaders to grab a cup of coffee. They really cared about my success and took the time out of their busy schedules to meet with me. That really stood out to me.”

Deutsche Bank apparently believes its investment in Bhakhri was worth it. As she started her junior year, she received an offer to return next summer for another internship, which she has accepted. 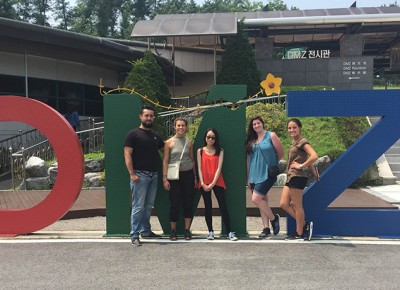