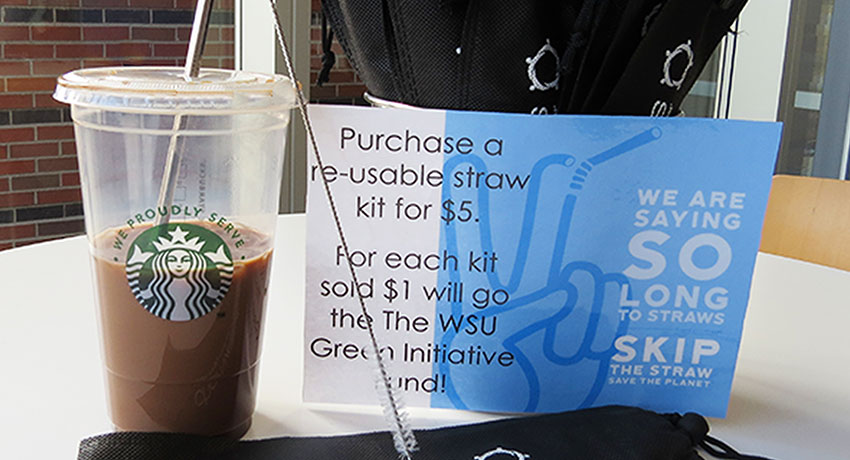 Chartwells launched its first “Skip the Straw” campaign this month as part of an ongoing sustainability initiative to reduce single-use plastic items on Worcester State’s campus.

Skip the Straw was born out of a collaboration between Chartwells and sustainability coordinator Steve Bandarra. “About two years ago Steve approached us about eliminating straws on campus and we made a commitment to that,” says Meghan Thulin, director of marketing for Chartwells. “We started out by offering paper straws, which unfortunately didn’t work very well, then we transitioned over to strawless lids in Starbucks.”

Two years later, Chartwells is making skipping the straw even easier by selling straw kits at several locations around campus, including Market Dowden, Starbucks, Smoothie Lab, and Woo Cafe. The kits sell for $5 and can be purchased using any tender, including the OneCard. Each kit includes a stainless steel straw and a cleaning brush, and comes in a convenient draw-string bag. While some plastic straws still exist on campus, they are distributed by request, for beverages that require straws, and for accessibility needs.

So far, approximately 100 kits have been sold.

Skip the Straw will continue until the end of February, but according to Thulin, Chartwells wants to make straw kits available to students year-round: “The whole hype around the campaign happens this month, then we’ll see what the demand is like and hopefully keep offering them.”

According to the Ocean Conservancy, the average person uses 1.6 plastic straws a day, which contribute to the roughly 8 million tons of plastic waste that enter the world’s oceans each year. The Ocean Conservancy also reports that plastic has been found in more than 60 percent of all seabirds and in 100 percent of sea turtle species.

Thulin adds that Chartwells will likely be re-launching Skip the Straw in April for Earth month.

“Sustainability is something that is near and dear to my heart as a personal value, and students today, this is in their wheelhouse–this is what they like to do and how they like to spend their money.”

Chartwells will continue its commitment to sustainability with awareness campaigns and challenges like Farm Workers Awareness week in March and Food Waste Warrior in April. 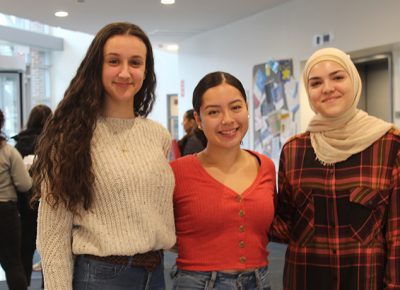 Serena Jaber ’23 has wanted to become a teacher since she was 7. Even in elementary school, as the oldest child in her family, she would make worksheets and assign them to her siblings to teach . . .