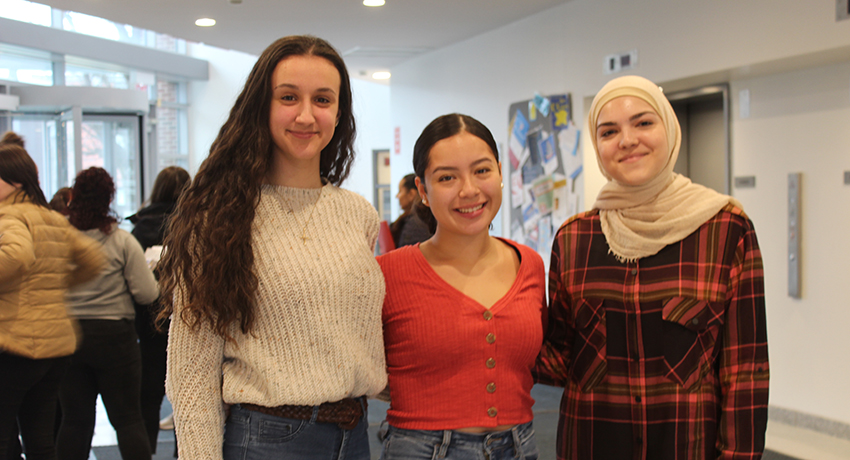 Serena Jaber ’23 has wanted to become a teacher since she was 7. Even in elementary school, as the oldest child in her family, she would make worksheets and assign them to her siblings to teach them the alphabet.

“I took reading textbooks that I had when I was little and actually made packets out of them and would assign them to my sister,” she said at a recent “Call to Teaching” event at Worcester State. “So being a positive role model for children and teaching them life lessons is a gift I would love to have one day.”

Jaber was among speakers who addressed students from urban school districts who visited campus on a Saturday morning to hear about “A Call to Teaching,” which is offered jointly each year by Worcester State University in conjunction with the Worcester Public Schools and Quinsigamond Community College. The aim is to encourage middle and high school students, especially students of color, to think about becoming teachers. The program addresses a need in school districts like Worcester where the minority student population continues to grow while faculty diversity has not.

The pipeline program is designed to give students information about the many ways Worcester State can help them become teachers through counseling support, financial aid, and academic assistance.

“There are not enough teachers of color but since we started the pipeline we can see some success,” said Raynold Lewis, Ph.D., associate dean of the School of Education, Health and Natural Sciences, who chaired the event. “It is not coming out full blast, but drip by drip, every semester we are graduating a teacher who looks like you and that’s a good thing.”

Benienda, who was a teacher for many years before she became an administrator, explained to the students why she thinks teaching is a job with a great work/life balance.

“Right now, you have summers off, right?” she said. “You have vacations off. You also have snow days off. So if you plan on having a family or you’re taking care of an elderly parent, it works into that schedule so that you can enjoy the things that you would like to do and also meet your obligations.”

Pedraja said his mother had been a teacher’s aide in a kindergarten and, growing up, he was impressed with the lasting and deep affection she inspired in her students.

“For many years after she retired, walking around in the malls, teenagers and grown-up people would come up to her and hug her because they remembered her,” he said. “They’d say, ‘You were like a second mother to me.’ So, if you want to change the world, if you want to change your community, this is an opportunity.”

Maloney, the son of an elementary school teacher, encouraged the students take an important step and join the teaching profession.

“We want you to move from your seats to the front of the room and say, ‘I want to become a teacher,’” he said. “You may be a little concerned, a little apprehensive, about whether you have the skills or not. We’ll work with you on that over time. So, congratulations for coming out on a Saturday morning. Congratulations for taking that first step. We’ll get you to the next step and beyond.”

Speakers also addressed some of the misconceptions about the teaching professions. Kaniu said that, while giving back to the community was at top of her list of reasons for becoming a teacher, is can also be a pathway to a decent living.

“I bought a house here in Worcester very early in my career when I was only 26, just from building on what I made every year as a teacher,” she said. “I think people have this misconception that teaching’s a career where you’re going to be poor, you’re not going to be able to get past maybe a certain level of wealth. Sometimes that holds people back from entering the profession, but I think that’s a true misconception.”

Current WSU students, all graduates of Worcester Public Schools, spoke about why they want to become teachers. Melanie Villamil, a sophomore, is a biology major with a minor in secondary education. She said the teacher pipeline program enabled her to begin earning college credits while still in high school by taking courses such as psychology and English Composition. “So, when I started here freshman year, I already came in with nine credits and I did not have to take those classes,” she said.

Villamil said she has been helped by financial assistance offered by WSU, especially the Adopt-A-Scholar program, where donors provide direct scholarship assistance to one talented student in financial need over a period of four consecutive years. “That’s another way that Worcester State is helping me achieve my goals,” she said. “I got an Adopt-A-Scholar scholarship and because of that I’m able to keep going with this.”

First-year students Amy Jano and Serena Jaber explained why they chose Worcester State to pursue their dream of becoming teachers. Jano said grant money aimed at helping diversify the teaching profession gave her and Jaber the chance to try out the college experience by taking classes for free.

“These classes allowed us to be ahead of the game while entering college with already nine credits,” she said. High school students are eligible to earn up to 12 credits through the program. The classes were held over the summer and from 3 to 6 p.m. once or twice a week at Worcester State.

While teaching has been a dream for Jano and Jaber, Worcester State and the pipeline program are turning the dream into reality.

“All these opportunities and experiences that were given to us from Worcester State have allowed us to take a step forward and realize what we’ve always wanted to become,” Jano said. 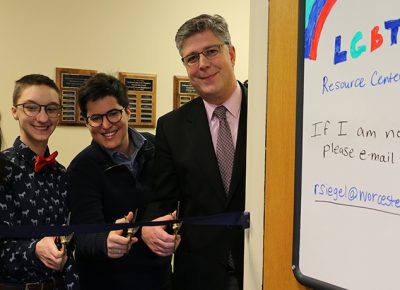 The campus community celebrated the opening of an LGBTQ+ Resource Center with a ribbon-cutting ceremony on Monday, Feb. 3. Located on the third floor of the Student Center, the center will provide . . .