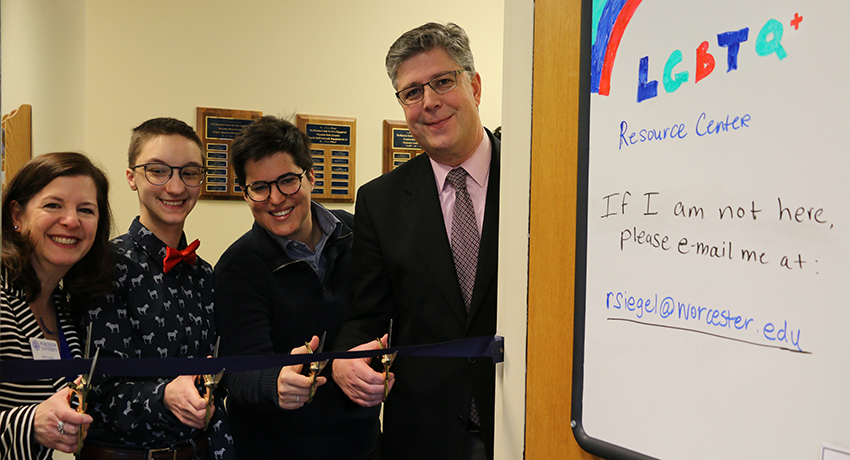 The Center will provide programming, support, and a safe space for LGBTQ+ students

The campus community celebrated the opening of an LGBTQ+ Resource Center with a ribbon-cutting ceremony on Monday, Feb. 3. Located on the third floor of the Student Center, the center will provide programming, support, and a safe space for LGBTQ+ students on campus.

President Barry M. Maloney said the need for such a center was revealed in several student surveys conducted to inform and guide his Five Points of Action Toward a More Inclusion Campus Climate initiative that was adopted in 2016.

“LGBTQ student voices from the survey said, ‘We’re feeling somewhat underappreciated, underserved and unsupported,’” said Maloney at the ribbon cutting, noting that space is a valuable commodity on campus. “If this resource room provides us an opportunity to engage with our LGBTQ+ students in a way we haven’t, to support them, to establish programming, and really help our students be successful when they are here, then it will have really paid for itself.”

LGBTQ+ coordinator Randee Siegel added, “This is just the beginning. We’ve just set the foundation. With our continued work and continued collaboration, we can be positive instruments for change at Worcester State.”

The center will offer referrals and coordinate programming with campus partners, such as the Counseling Center, Residence Life, and the Wellness Center, and serve as a central location for information on city and state resources, added Siegel.

Student Leo Decosta ’21, president of the LGBTQ+ Alliance, thanked the Alliance’s Executive Board, the group’s advisors, and Siegel for “helping our club see through projects we want to have on campus but cannot do ourselves.” 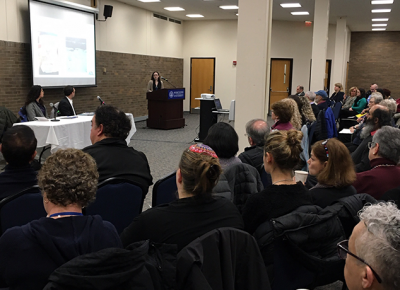 Speakers Encourage Working Together to Combat Hate and Anti-Semitism

One day after the international remembrance day of the Holocaust, campus and community members gathered to learn about the persistent scourge of anti-Semitism and other acts of hate, and what . . .