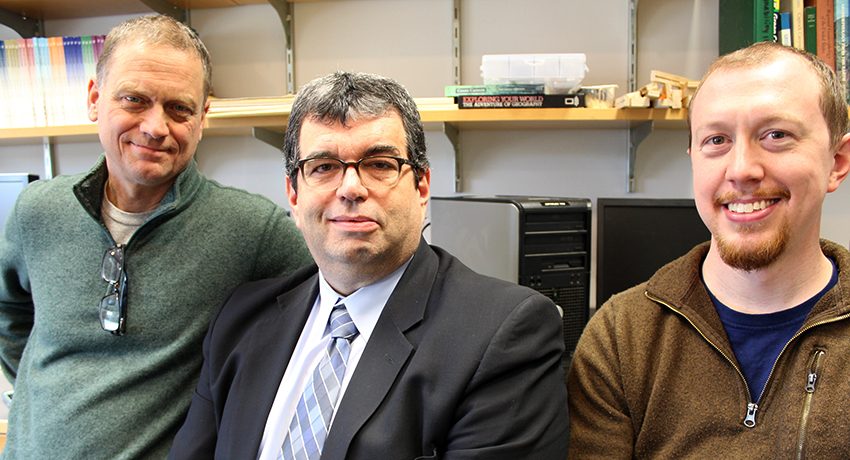 CityLab and GIS Lab Team up to Study Voting Trends

A growing partnership between two labs at Worcester State University may someday help the city of Worcester increase voter turnout for all elections and combat the opioid crisis—all while helping students get into graduate school.

CityLab, a research institute of the Urban Studies Department, recently collaborated with WSU’s GIS Lab to produce a report on voter turnout in Worcester. The GIS Lab, part of the Earth, Environment and Physics Department, has expertise in geographic information systems. Lab researchers use software for spatially analyzing data, from which they can build digital maps that examine historical features and look at various demographic trends, among many other things.

The voter study report found that the historically low voter turnout in the city may be even worse than previously thought when measured by a broader standard not usually used by the city. Worcester traditionally measures turnout by comparing the number of voters who go to the polls in a given election against the number of registered voters. But the WSU study, which looked at the 2016 presidential election, found that voter disenfranchisement is even greater when you count the large number of people who are qualified to vote in Worcester because of their age and citizenship status, but cannot vote because they have not registered.

The WSU study, “Eligible Voters in Worcester, Massachusetts,” was done this fall by Thomas E. Conroy, Ph.D, an associate professor and chairman of the Urban Studies Department and director of CityLab; William Hansen, Ph.D., a professor and chairman of the Earth, Environment and Physics Department, and John Holbrook, a geoscience laboratory technician.

“Tom Conroy came to us with the fact that this voter data was available online, that low voter turnout has been an issue for the city, and he asked what we could do with GIS to analyze it,” Hansen said.

One thing the study showed, perhaps not surprisingly, was that turnout was much worse in poorer areas of the city, particularly among non-English speaking people. “Those groups aren’t voting and expressing their political will,” Hansen said.

The report is a first step in what likely will be frequent collaboration between the departments and labs involved. “The GIS Lab is a very powerful tool for the kind of CityLab reports we do and also for university research generally,” Conroy said. “We’re looking to do more chapters, you might call them, to the Worcester Voter Study and looking at different aspects of voting and participation in the city.”

The study will involve looking at data on vehicle registration per census area. “We’ll look at things like whether transportation is an issue,” Hansen said. “On the west side of Worcester, you have three cars per household. Where in certain others areas of Worcester, it’s below one. We’re also looking at the bus routes, as in, is there a way for people to actually get to the polling places?”

Among other possible research collaborations, the faculty may take a look at the opioid epidemic. “This is an area where we can take CityLab, which is dedicated to interdisciplinary research, and take things like GIS maps of places where overdoses have occurred in the city from public data records like police and fire reports, sketch those out on a map, work with our own Health Science Department and maybe the city health department, and start to talk about what this means and how we can address things like this,” Conroy said.

Students are almost always involved in research projects at CityLab and the GIS Lab, Conroy said. “Ultimately, part of what we’re looking to do is build our curricula in such a way that by the time our students get to be seniors, they’re working on projects not under us, but with us,” he said.

Since seniors are just shy of doing graduate-level research, this would be a way for them to get credentials and be part of published reports. “They’d be named on reports, and then could put all that on their grad school applications and use it for their professional job searches,” Conroy said.

Collaboration was key in getting the voter study together and likely will play an even greater role in future research efforts, according to Conroy. “One of the great things about being at the University at this particular time is that there’s just a lot of very interesting and talented scholars across the all departments that we can work with in much more interdisciplinary ways,” he said.

The Wellness Center at Worcester State University, with fitness equipment that sends power back to the grid during a workout, has earned a Leadership in Energy and Environmental Design (LEED) Gold certification for sustainable design and energy performance from the U.S. Green Building Council. Designed by Boston-based ARC/ Architectural Resources Cambridge for the Massachusetts Division of . . .