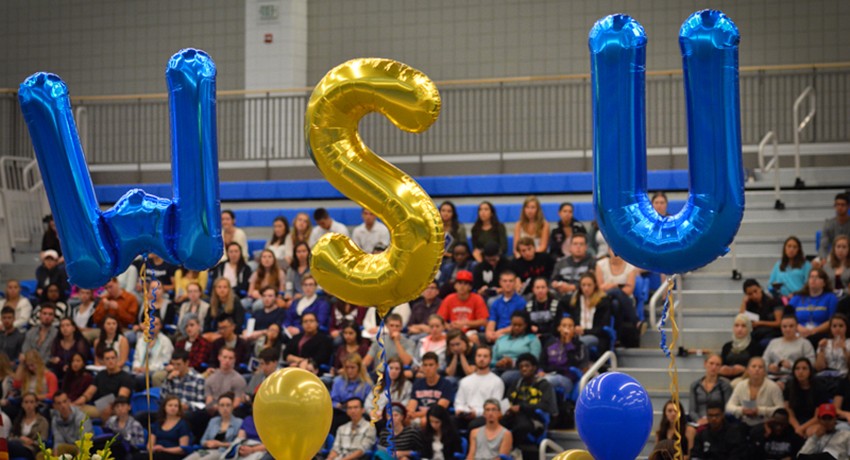 Overcast skies and misty rain from Tropical Storm Hermine did little to dampen the spirits of the more than 200 first-year and transfer students who participated in Worcester State University’s second annual Academic Convocation on Tuesday, September 6.

The welcoming ceremony was special for another reason: It was the first event ever held in WSU’s new Wellness Center.

Dean of the School of Education, Health, and Natural Sciences Linda Larrivee encouraged the students to make their classes and studying a priority and to talk to their instructors and advisors. “Every one of them is here to help you,” she said.

Senior Andrew-Huy Ngo encouraged his newest fellow students to make lifelong friendships, embrace change and uncertainty, and “put yourself out there.”

All that helped Ngo get to where he is today, a double major in business administration and economics with a concentration in global studies and president of the Student Government Association. “Coming to Worcester State, I was shy and had terrible public speaking skills. I never would have imagined that I would be speaking in front of all of you today,” he said. “Nothing is impossible if you make an effort.”

Kurt Correia, a criminal justice major who graduated last May and was last year’s student trustee, told students not to be surprised if they come to consider the friends they make at Worcester State family. “You will find that over your next four years, you will make friendships that make you question the limits of family, as I always refer to my best friends as my brothers, and no family would be complete without friends that watched out for us like they were our mothers,” he said.

Correia also told the students to put academics first. “No matter the reason that you are here, the goal is the same: to leave better than when you arrived, to leave a more educated and worldly individual,” he said.

He also offered advice that he wished he “had been told boldly” when he was a new student:

Associate Professor of History and Political Science Tona Hangen, Ph.D., likened the students’ arrival at WSU to time travel and landing at a place “with a specialized vocabulary, classroom locations in some kind of code, [and] people dressed in colorful robes.”

The timing of their arrival is marked by “vast oceans of information,” “civil discourse endangered in a world of internet trolling, body shaming, cyberbullying, and rancorous media punditry,” many unstable political systems around the world, millions of displaced people around the world, rapid scientific and technological discoveries, “difficult challenges from disease, climate change, and natural disaster,” and an election year, she observed.

“We need informed, sensible, and intellectually awake young people,” she said. “You are irreplaceable, both here and in our greater community.”

In addition to encouraging the students to “read the syllabus” for each class, Hangen invited them “to discover at Worcester State your fire, your footing, your folks, and your future.”

It is an invitation WSU’s Class of 2020 appears ready to accept, as President Barry M. Maloney noted in his welcoming remarks that it is “one of the most academically prepared classes in Worcester State’s history.” 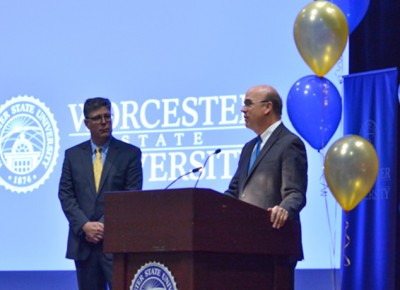 Congressman James P. McGovern offered keynote remarks at Worcester State University’s 2016 Opening Day Conference for faculty and staff, praising them for inspiring him and calling on everyone to . . .